When HyperX first tried their hand at making gaming peripherals, they had a very simple mission statement. There main goal was to come up with high-quality gaming headsets that don’t have a lot going on and at affordable prices. However, things have changed quite a lot since then. The company now has started manufacturing keyboards and mice as well, and with good results at that. However, over time, the products they’ve been releasing have started costing more and more, making their way back to being products with premium features at premium price tags. 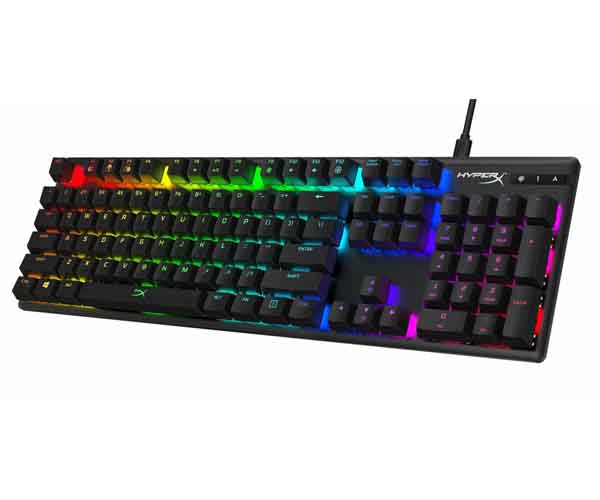 That being said, the keyboard we’ll be looking at today is an attempt by HyperX to return to form. The HyperX Alloy Origins gaming keyboard is a full-featured, full-size mechanical gaming board that comes with very comfortable key switches, full RGB backlighting and an incredibly sturdy chassis. And guess what, all this comes at a price that’s around fifty dollars less than what it’s competition is going for. Truth is, this board isn’t one of the best mechanical gaming keyboard out there. Why? Because it lacks a couple of features that are usually standard inclusion in keyboards of this nature, like a wrist rest and discrete media key functions. Furthermore, the software that powers it is way to technical and the key switches on it are kind of a feel like inferior Cherry MXs.

That being said, the fact that you can get all the many other useful features it has for slightly over a hundred bucks is somewhat enticing. Yes, it may not be one of the most feature-rich mechanical board available to you, but for what it costs, it has a quite a lot of very impressive stuff.

Whether you want this device solely for gaming purposes or whether you intend on using it in the office, it’ll look great either way. This is because it has this compact, understated overall design style. The Alloy Origins, with its black aluminum chassis, is actually a very elegant and sleek looking gaming keyboard. It doesn’t take up as much room as one would expect measuring in at about 17.4×5.2×1.4 inches. It blends in well in almost any setup, especially because RGB backlighting can be customized to fit any scenario. 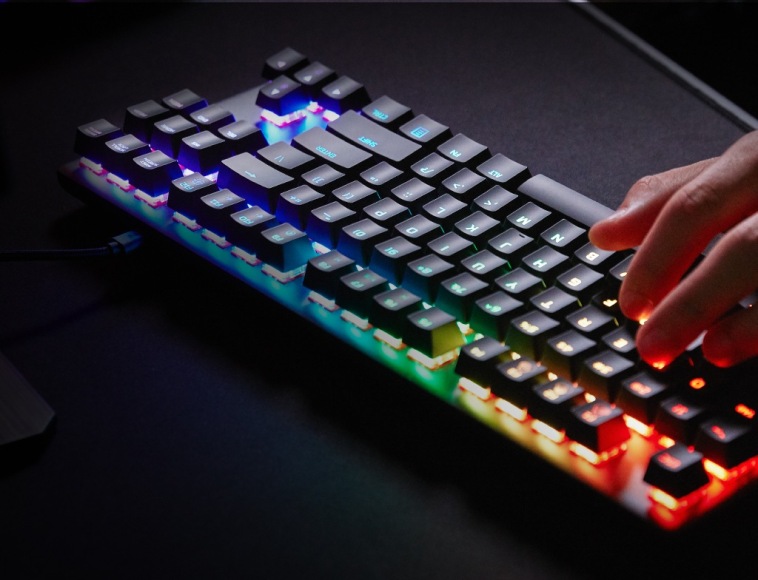 At first glance, the Alloy Origins from HyperX just looks like your ordinary full-sized gaming keyboard, however, it has two specific features that make it a tad bit special. Firstly, its first 3 function keys can be used to switch between onboard profiles. Okay, whether you’ll need this particular feature depends on whether the board will be used on multiple computers. Though, having the ability to activate these profiles with a touch of a button is actually really useful. The second thing is the tiny LED display screen located in the upper-right corner designed to help the user keep tabs on Num and Caps Lock as well as the Game Mode feature, which disables certain key functions when the board is being used for gaming. Not only is this feature quite attractive but it’s functional as well. In fact, more gaming keyboards should really consider having this.

Arguably one of the main reasons why this particular mechanical keyboard is so affordable and generally costs less than a lot of its competitors out there is because it doesn’t use Cherry MX key switches. Instead, HyperX came up with their own key switches in-house; HyperX Blues, HyperX Reds and HyperX Aquas. The Blue switches are tactile and clicky, the Red switches are linear and quiet, while the Aqua switches are tactile and quiet. The ones that most compare to Cherry MXs are the HyperX Reds. They’re quiet enough for office setups and have enough resistance to provide for satisfying key presses. The actuation force and key travel they offer is also a little less than what you’ll find with Cherry MXs, and this is actually why the generally feel very stiff. 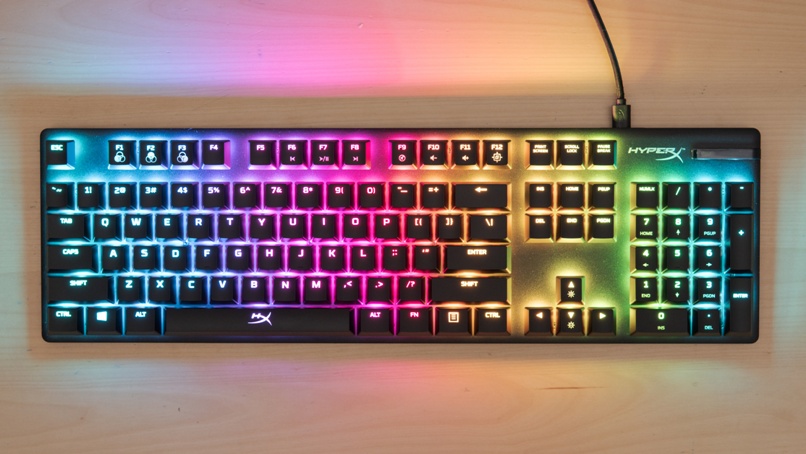 HyperX’s NGenuity Software is what powers the Alloy Origins wired keyboard. Unfortunately, this software is currently still in its beta state. You can also only download it via Windows Store, which is also kind of a pain, but oh well. Anyway, the NGenuity still needs to be worked on some more, especially as far as the creation of game-specific profiles is concerned. You really can’t do much with this technology from HyperX. The only things it allows you to do well is tweak RGB backlighting and assign these lighting presets to different individual application and game titles. You can reprogram key functions nor can you create macros as well, making it a fairly bare-boned bit of technology. 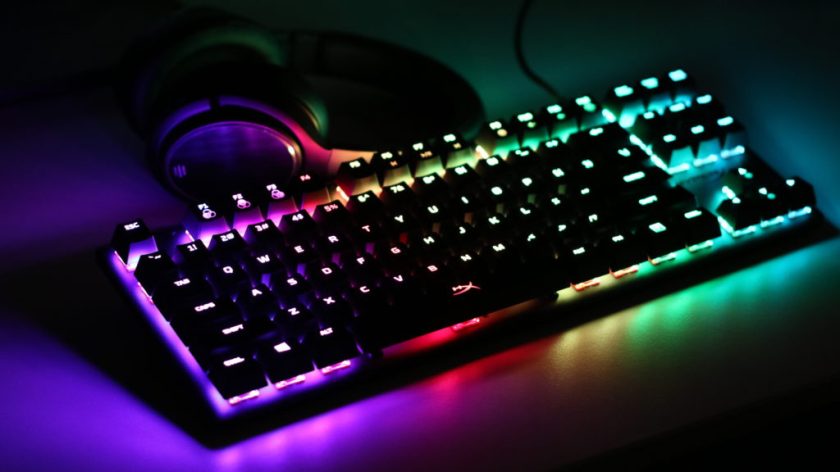 To make things even worse, creating lighting profiles can sometimes prove incredibly difficult to achieve. If all your looking to do is initiate preprogrammed patterns or solid colors, then that might not be so hard to do. However, if you want to program the keyboard in a way that certain “zones” have different colors and special effects, then that might prove a more complicated process for you. Instead of just simply selecting the keys, effects will need to be layered on top of each other and different sets of keys will have to be assigned to each one. It’s way less efficient and more complex than what you’d get with similar programs such as Razer’s Synapse and Logitech’s G Hub.

Also, profiles don’t work as seamlessly as you’d want them to. Even though you manage to get the program to register and recognize a particular profile during launch, the board won’t revert back to your default profile when you get back to your desktop. It’s basically way to arcane when it really doesn’t need to be, especially considering we’re in 2020. Furthermore, it’s not as polished as it should be as well.

Anyway, it’s not all doom and gloom though. There’s some good news. Not only does it use the more modern and advance Type-C USB connection but the cable is also detachable as well. It’s rare to find full-sized gaming keyboards that have detachable cables and it’s even rarer to get one that uses USB-C technology as well. Okay, the Type-C connection may not have clear practical benefits, however, it’s kind of good to know that HyperX is keeping their eye one the future.

The Alloy Origins mechanical keyboard can ran game titles such as Final Fantasy, Hitman, Tomb Raider, For Honor, StarCraft: Remastered and Overwatch incredibly well. It handles most game genres deftly and provides precise and responsive key presses for everything from demanding skill rotations in those MMO game titles to the first-paced, high-octane first-person shooters. Keep in mind, though, that the board doesn’t support the programming of macros, which means you’ll be at somewhat of a disadvantage if you need them in high-level MMO plays. 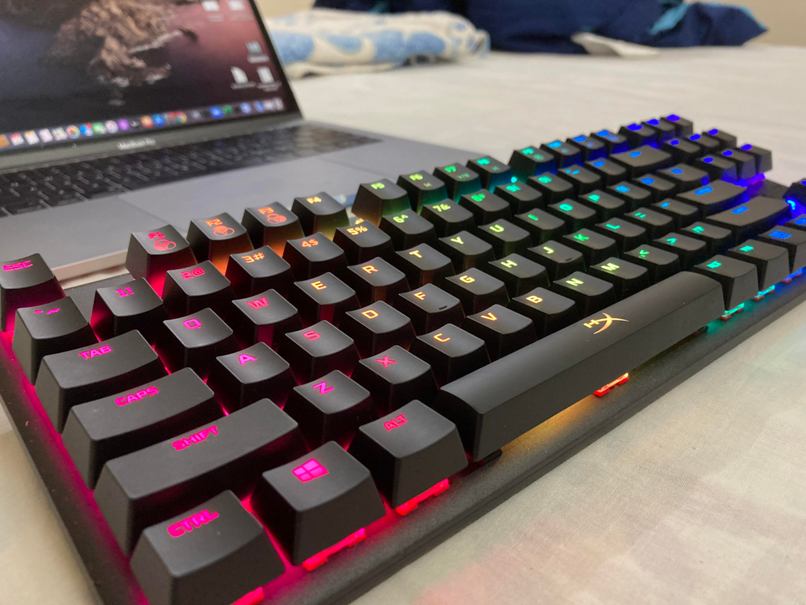 While the lack of Cherry MX switches might sting a little, the in-house developed switches from HyperX themselves are actually quite worthwhile. Additionally, the affordable price-tag is just too hard to ignore as well, considering the fact that it’s almost impossible to get a brand-new mechanical RGB gaming keyboard that goes for around $110. Yes, the NGenuity software it uses still need plenty of work, and discrete media key functions could have really rocked, however, overall, it’s hard it’s difficult to fault what this gaming keyboard provides, especially when all that comes at a fraction of the price. If your gaming space needs that RGB lighting touch and you don’t want to break the bank while you’re at it, then this keyboard device is definitely what you need in your life right now.

The core on this device is actually one of the best you’ll find out there, especially for those people that are looking for compact and tight models. Its form factor is relatively small, however, it doesn’t compromise performance features and build quality. It’s perfect for those of you that travel a lot with your keyboard and those who work in small, confined spaces.

HyperX claim that their in-house developed HyperX Reds and HyperX Aquas are almost, if not just as good as their Cherry MX counterparts. For starters, they have similar actuation forces of 45-grams. However, HyperX switches have less total travel distance as well as actuation distance. Okay, the Aquas and Reds might not be the most ideal for typing purposes, but that’s not to say they can’t hold their own in that category.

Does the keyboard have hot swapping capability, or are the switches on it soldered in. Unfortunately, the RGB key switches that come with the board are soldered in and can’t be replaced.