In the hyper-connected society we’re all currently living in, reading a book has arguably become a last refuge for many people out there. Meals can’t be eaten without first being dressed up for Instagram, you can’t watch your favorite movie flicks without having an account on a convoluted streaming service and you can’t even enjoy playing video games without having it first download huge patches. However, a book would never put you through all these complications. All you’d need to do is open the book up and escape to new worlds in your imagination that are more lifelike and vivid than anything found on a screen. 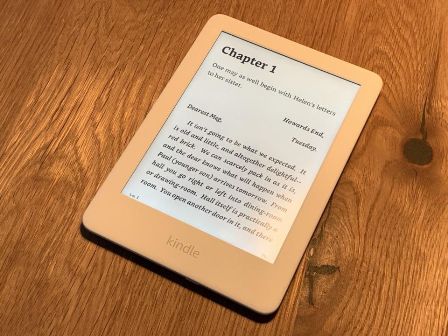 Anyway, e-readers such as Amazon Kindle tabs, theoretically, try to create these aforementioned experiences as faithfully and accurately as they possibly can. They’re basically designed to replace bulky physical books and documents with a more space-efficient digital alternative. Although, in practice, these e-reader devices have grown to become just as distracting and unfocused as smartphone devices, and the new Amazon Kindles is a good example of this.

This new budget-friendly Amazon tablet, from a hardware perspective, is just fine. It combines a long-lasting battery, robust front lighting and a clear, crisp display screen in a comfortable and compact package. It also has an admirable selection, whether you want to leverage Amazon Prime subscription, see what’s on offer in your local library or whether you’d prefer to purchase certain books individually. However, everything else about the overall experience, the laborious menus, tedious Good reads integration and constant ads, makes you feel like Amazon is more focused on selling you more things rather than just allowing you the chance to sit down and enjoy your favorite book.

All in all, the new Kindle is actually a good overall product, and does what it’s meant to do. In fact, if you tweak it a little it can transform into one of the best e-readers out there. Furthermore, it also has quite an affordable price-tag, on the surface at least. Oh, and when Wi-Fi is turned off, you’ll be amazed at how much more serene and quieter the experience gets. 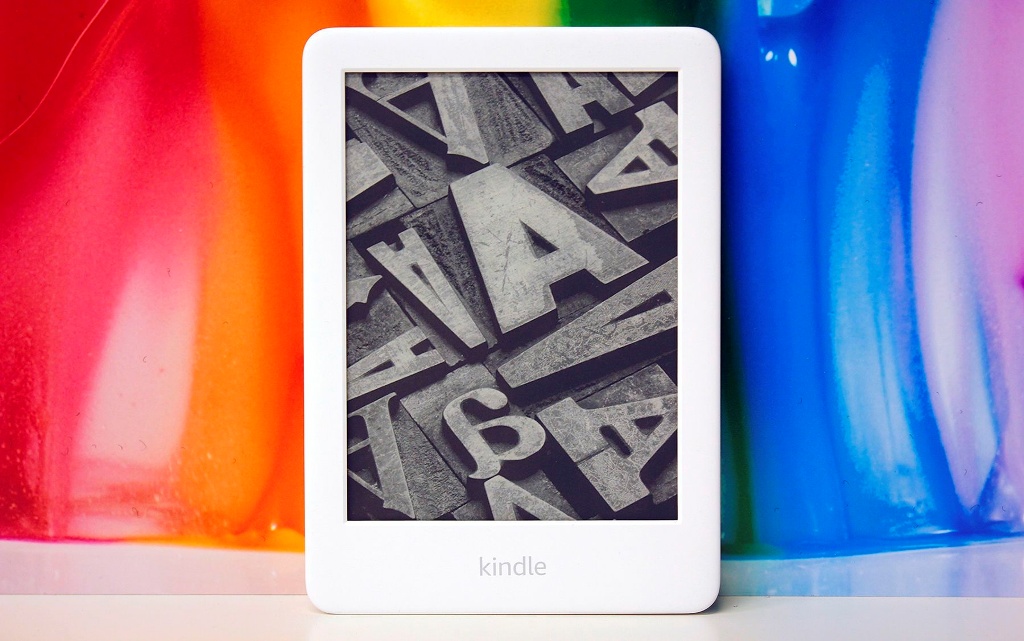 If you’ve used the flagship e-reading devices that Amazon have released in the past few years or so before, then the new Kindle should both feel and look very familiar. This 6.1-ounce, 6.3×4.5-inch Amazon tablet is portable, east to throw into anything from large pockets to backpacks and it’s very comfortable. Furthermore, the tab has an enviable thickness measurement of 0.3-inches and comes both in a white and black color scheme.

When it comes to physical ports and inputs, the Amazon Kindle 2019 is also considerably sparse. You’ll find a charging port and a power button on the bottom, nothing else. Yes, that’s just about it. It doesn’t have any physical button functions, which is kind of a bummer, particularly because it’s not offered in many other Kindle devices as well. If users want to turn their pages physically, they’ll need to have to look at the pricier Kindle Oasis e-reader, which kind of now feels like a huge chunk of change for features that are a standard inclusion in almost all the new e-readers out there. 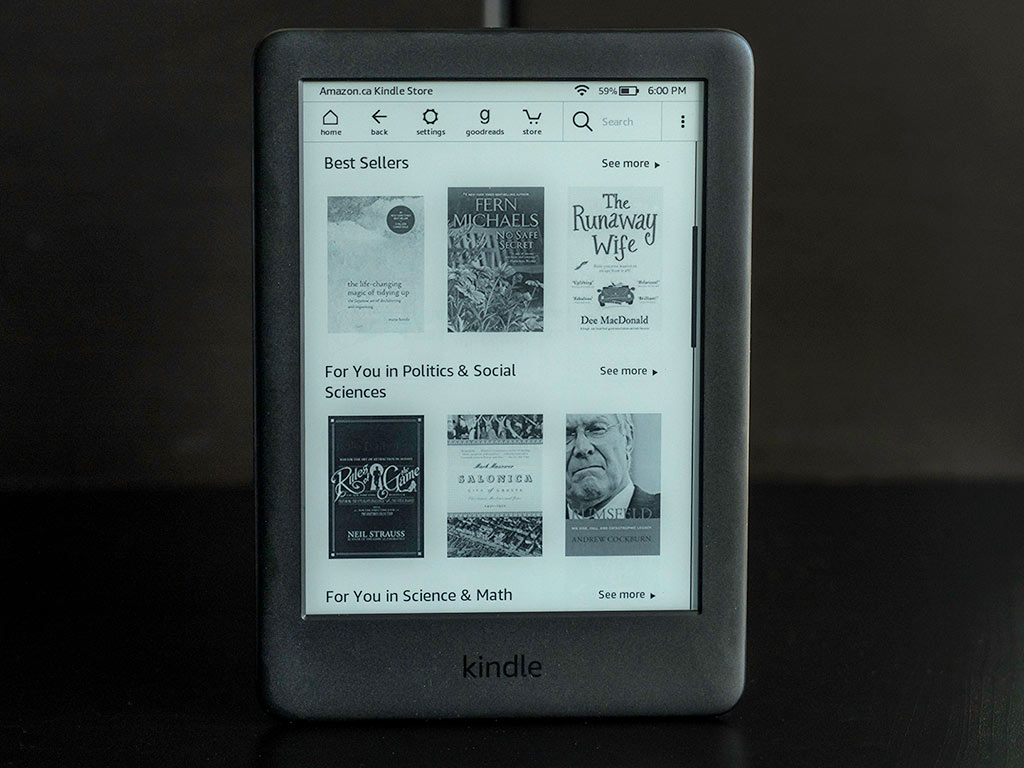 If you’re a night owl, then this is your time to rejoice. The guys at Amazon have finally decided to include a front light feature to their cheapest e-reader device. Okay, you’ll now have to pay $10 more upfront, however, considering how handy a front light can be, that’s somewhat of a fair trade, no? Okay, in the event you’re upgrading from an older generation e-reader, or maybe even from your smartphone because you’re tired of having to read 100-page documents on LCD screens, you should know that the front light feature lights the Amazon Kindle’s display screen to suit all reading environments. Unlike backlight features, which can drain a lot of the battery and look harsh to boot, front lights don’t consume as much battery and go pretty easy as well. In fact, can it really be an exaggeration if you said front light illumination was a game-changing e-reader innovation? They allow you to read under any kind of lighting, from direct sunlight to pitch blackness. It’s honestly been a long time coming for Amazon’s budget Kindle, but better late than never.

This front light feature is also often very easy to use. Although, it has more clicks than one would expect, or like for that matter. When reading a book, you’ll need to tap the top to bring up the options menu. Here you’ll find another settings button you’ll need to tap. Once you’re in here is when you can finally choose between twenty-four lighting levels, from an unlit, plain screen to something that can be used as an impromptu torch or flashlight. Anyway, at least there’s not much to turning off or maxing out the lighting. All you’ll need to do simply hold down a symbol found on both sides of the menu.

Beyond this feature, the Kindle’s display screen is more less the same as it has been for the last couple of years or so. The tablet’s elegant gray-scale screen display has a 167 ppi resolution. A lot of people might be of two minds when it comes to this resolution. On one hand, while this 167 ppi is exactly what you find on the Kindle before this one, it doesn’t match the 300 ppi resolution you find on the more high-end, pricier Kindle e-reader devices. However, it’s kind of not such a big problem unless you like placing the device right in-front of your face. 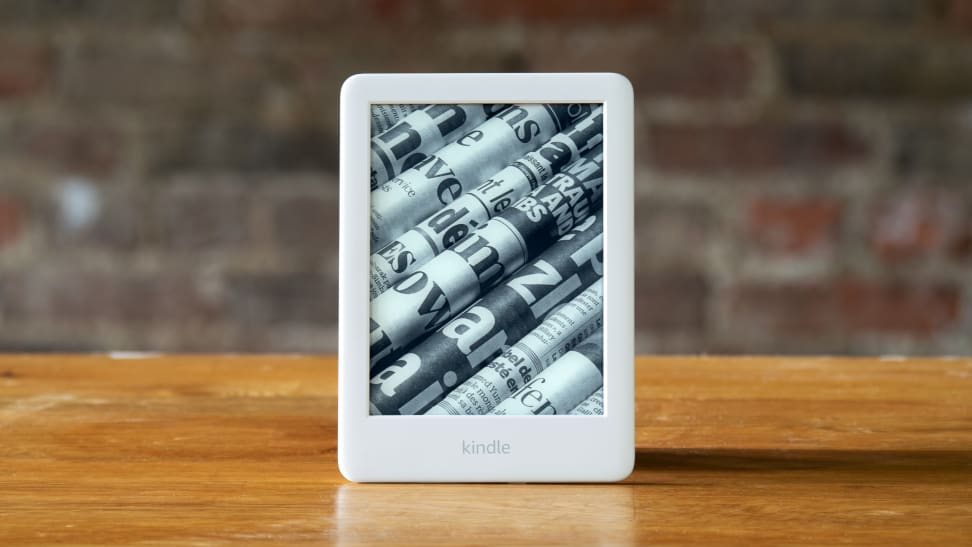 Amazon’s Kindle store is undoubtedly one of the most comprehensive and oldest e-book providers out there. Whether you’re looking for the cult hit, New York Times best sellers, foreign language titles, graphic novels, magazines or basically anything else, the Kindle store will most likely have it. The one relatively new thing in the Kindle, however, is the Audible books integration. Because the audiobook giant Audible is owned by Amazon as well, it’s rather easy to download an audiobook onto the Kindle and play this said book via Bluetooth functions, like a wireless speaker or headsets. It’s still not so clear how necessary this particular feature is, especially because the Audible app on your smartphone is just as effective, but it’s kind of nice to know it’s there.

You can pick books from libraries with the Kindle, although it has a surprisingly sparse selection. You can test this by borrowing some books from the Queens and New York City library systems. What you’ll get to see, if you do, is a device that makes it way easier to getting library books onto Nooks. All you’re required to do is pick your desired book, check this said book out and then automatically download it onto your Kindle.

Anyway, the biggest downside the new Amazon Kindle has is that the e-reader tries to undercut the purpose it was designed to fulfill in the first place at almost every turn. The entire reason one usually wants to own an e-reader device is to try and avoid the distractions you’d come across when using a tablet or smartphone, especially since reading needs way more focus and investment than, let’s say, watching a series. Not only with the Kindle’s noise keep you from fully concentrating, but each time you start to read, the Amazon Kindle will start displaying pop-screens asking you whether you’d like to compare reading habits or whether you’d like to use Good reads to track process which is even more distracting. 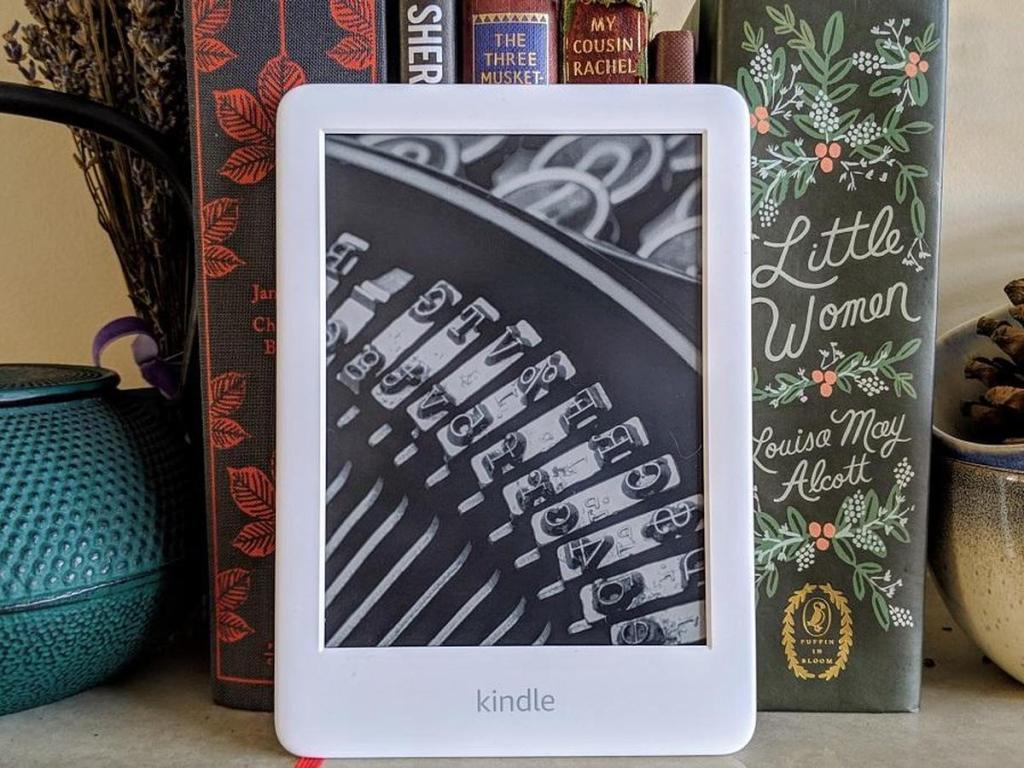 The best thing about the new Amazon Kindle is the reading experiences it provides. They’re simply outstanding. If you’ve gotten a certain book you’re looking to devour and have a nice quiet spot to go along with it as well, then reading on this device will just be as good as having the actual, physical book in your hands. In fact, it might just be even better, dare we say. Especially since one hand can be kept free in case you want to use it to grasp your emergency stash of skittles or M&Ms.

As mentioned earlier, it is also easy to customize the device’s illumination setting to suit your requirements. However, it’s also worth mentioning the formatting and font options offered by the e-reader, of which it has plenty of. You can pick from between ten different in-built fonts or you can side-load one of your own. There also fourteen different text sizes you can choose from as well, ranging from the almost comically huge to the unreadably small. You can set page orientation, spacing and margins, and even have your best combinations saved as Themes. In addition to this, you one can also determine whether they’d like their device to give them regular page numbers, track nebulous Locations or even inform them of how much time they’ve got left in chapters. 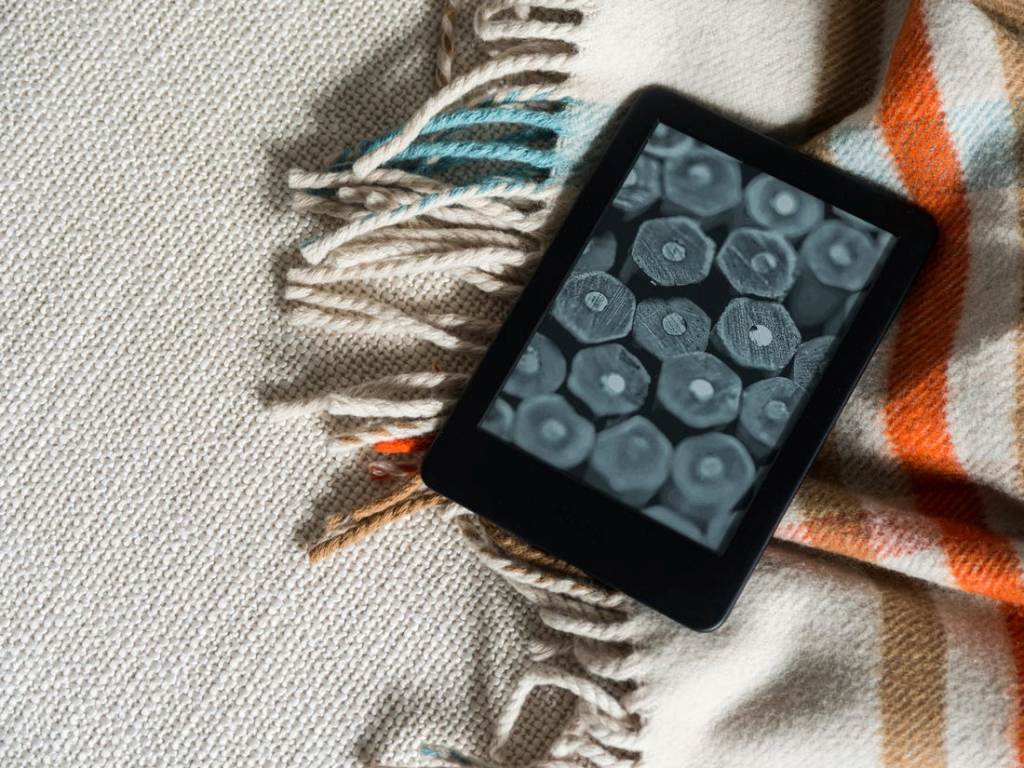 Another area where the new Amazon Kindle does very well is in the battery department. Amazon has claimed that one single charge should be able to give users a month worth of reading time, even when the device’s front light feature is on. Yes, you read right. The company claims it can be operational a while 30 DAYS on one charge. Battery life will, naturally, depends on how fast the user reads, how the front light is being used, whether Wi-Fi is on and several other tiny factors here and there. So, a full month might not be the case for everyone.  You also get 4GB of storage, that can’t be expanded though. However, even though you won’t be able to use the help a microSD card provides, that 4GB should be more than enough to store loads of books, considering most books aren’t more than 5MB. What you can’t fit into the Kindle, though, can comfortably be stored in the almost limitless Amazon Cloud.

Amazon say their Kindle device offers people “sanctuary experiences”, meaning that this e-reader is designed to help you tune out all the other outside distractions and concentrate on a book, just how the writer of the book intended. If you’re willing to go deep into the menus in the Kindle you can assure this experience. That being said, the Kindle’s user interface, by default, is very noisy and busy. This kind of beats the purpose when technically reading books for pleasure is technically something one would want to do in silence with as little busyness and noise as possible.

From the utility and hardware perspective, you can’t really fault the new Amazon Kindle, with its beautiful display and wide array of wonderful books. When it comes to price, it’s a fairly affordable e-reader, however, that extra $20 you’ll have to part with to remove adverts is still something that stings a little. Anyway, once you get the Kindle working just how you like it, you can expect to enjoyable reading experience in any kind of lighting.

Can Kindle books be sent to multiple devices?

Multiple Kindles can be added onto one account. Once a book has been bought on one Kindle, it can be simultaneously read on another Kindle without you having to purchase it all over again.

Does the Kindle Have a monthly fee?

Amazon has a new subscription service it calls Kindle Unlimited. For $9.99 per/month, you can get any audiobook or e-book you like. Unlimited subscribers can both listen and read any of their books on any Amazon Kindle device.