The Apple iPad Pro 12.9 tablet really tries to be way more than just a quasi-computer. For a long time now, the Pros have been somewhat like tabs on steroids, besting many laptops when it comes to battery life and speed, however, certainly not as far as computing comfort is concerned. That being said, the new Pro 12.9 has evolved quite a lot. The iPadOS now supports full cursor inputs and there is also now a new Magic Keyboard device with satisfying scissor switches and a trackpad. 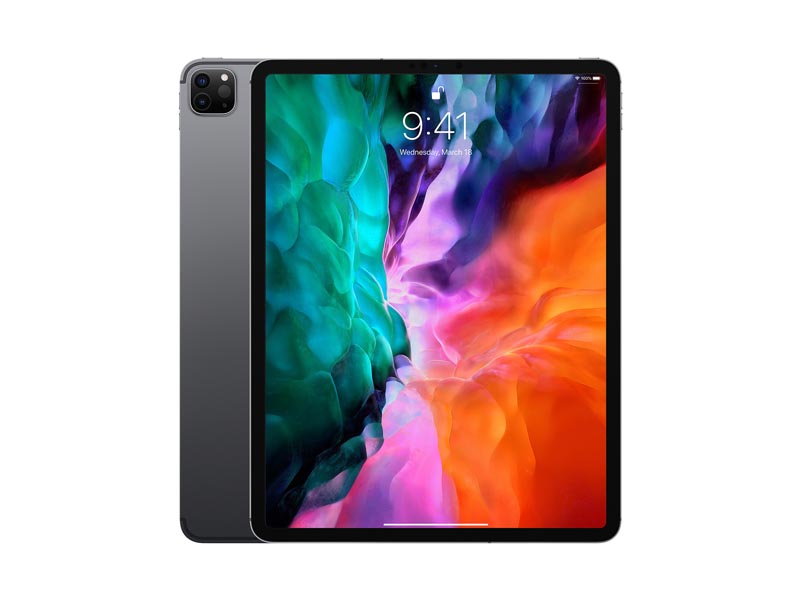 The new iPad Pro 12.9 has also improved a lot in the performance sector with the inclusion of the A12Z Bionic chipset, which is accompanied by an eight-core graphics engine, a LIDAR scanner that provides a more responsive AR experience and a new, updated dual-camera system. However, don’t get it twisted. As you’ll get to see in this review of ours, the Apple iPad devices are still touch-first tabs, which means it’ll take a little more time for the developers at Apple to optimize applications for trackpad input. Although, overall, the Pro 12.9 tab is arguably one of the best Apple tabs ever manufactured, and the closest the company has come to creating an efficient laptop replacement.

The new iPad Pro practically looks identical to the Pro that came before it, though that’s not something you need to frown about because it isn’t really a bad thing. This 12.9-inch tablet is nearly all-screen, with an ultra-slim profile, rounded corners and narrow bezels on the 4 sides. The biggest difference between the two are found at the back where you will find, on the upper-left corner, a square camera bump that houses the LIDAR scanner as well as the dual-cameras. When it comes to its overall appearance, it looks a lot like the Apple iPhone 11 Pro handset. When using landscape mode to view the front, it still has a magnetic strip at the top where the Apple Pencil is to be attached. It only has one port on the right-side which is a USP Type-C port for both plugging in accessories and charging. 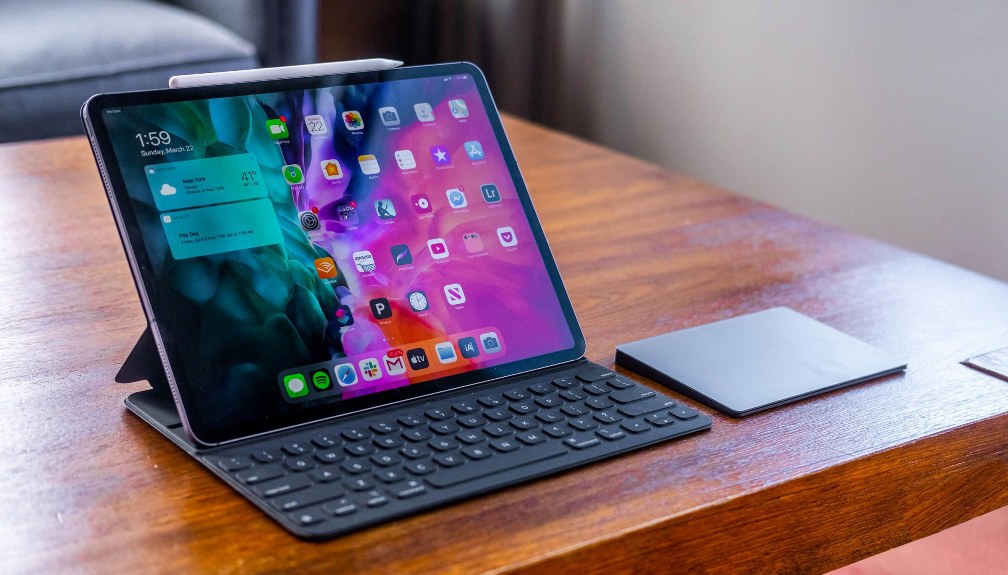 Just like the 2018 version, the Pro 12.9 houses, at the front, a TrueDepth camera, which supports Face ID for quick unlocking. It also has a similar measurement of 11.04×8.46×0.23 inches, though it’s a little heavier than its predecessor weighing in at around 1.41-pounds compared to the 1.39-pounds the Pro 2018 was at. For the Cellular and WiFi models of the iPad pro, the weight goes up just a bit to 1.43-pounds.

The iPad Pro’s Liquid Retina display screen is one of the best display screens on any tablet or mobile device currently on the market. It’s colorful, bright and leverages the ProMotion tech for the automatic adjustments of the refresh rates up to around 120Hz. When watching the new Fast and the Furious trailer on it, Pro 12.9’s display rendered all the cars on the clip with exquisite detail as their gadgets popped from all directions of the cars. The display has an average brightness of about 559 nits, which happens to be a lot brighter than what you’ll get from the screens on both the Surface Pro X and Surface Pro 7. Also, the Pro 12.9’s screen delivers a wide variety of colors, registering an impressive 122.9% sRGB color gamut. The Surface Pro X and Surface Pro 7 hit 103% and 102% respectively. It’s safe to expect incredibly accurate colors too, as the new Pro 12.9 device has a 0.34 Delta-E score.

The new Pro’s Magic Keyboard is a major upgrade from the much older Smart keyboard Folio, however, it’s also way more expensive as well. Though, what do you really get for that exorbitant price increase?

Okay, while this new accessory helps make these devices feel more like real laptops, there are a few asterisks. Not only is this new accessory quite expensive, but when you dock it with the iPad Pro 12.9 the weight rises to almost three pounds, which happens to be just half a pound lighter than the MacBook Air. Another thing that helps make this new Apple iPad device standout are its clicky key switches that provide stronger feedback and a better feel than those fabric textured keys you’ll get with the Smart Keyboard. The Magic Keyboard accessory uses a scissor-style mechanism which is similar to what you’ll find on the 16-inch MacBook Pro and MacBook Air 2020. 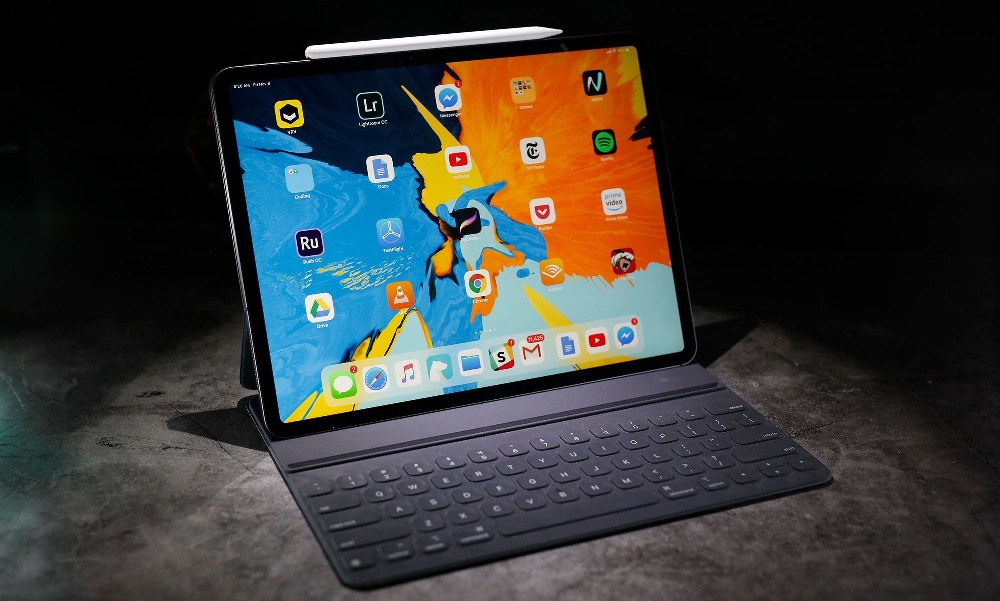 The recent trackpad and cursor optimizations on the iPad OS came at just the perfect time. Swapping between applications can be done effortlessly using three fingers either to the right or left of the touchpad. Yes, the touchpad isn’t as big as what you’ll get with MacBooks, however, it’s entirely clickable, which is unlike many of the PC laptop touchpads out there. Although, the coolest thing about the new magic keyboard accessory is its floating design-style which helps make it look like the Pro 12.9 is hovering above the keyboard. Also, the iPad Pro can now be adjusted between 85 – 130 degrees, beating the positions allowed by the Smart Keyboard.

A feature that has been long overdue has finally arrived with the iPadOs 13.4. This feature is the trackpad support. No longer just an accessibility feature, the iPadOS is now rocking a redesigned cursor feature that has a circular-shape on the screen. This circle changes its shape depending on what’s happening on the screen. For instance, the cursor disappears on the Home screen when users hover over certain applications. When using the cursor in the Photos application, the cursor highlights both the Heart and Share icons in a tiny box when you hover over them. When in a webpage, email or document, this circular cursor transforms into an I-beam for when you need to select texts. Right-clicking can be used to copy text. 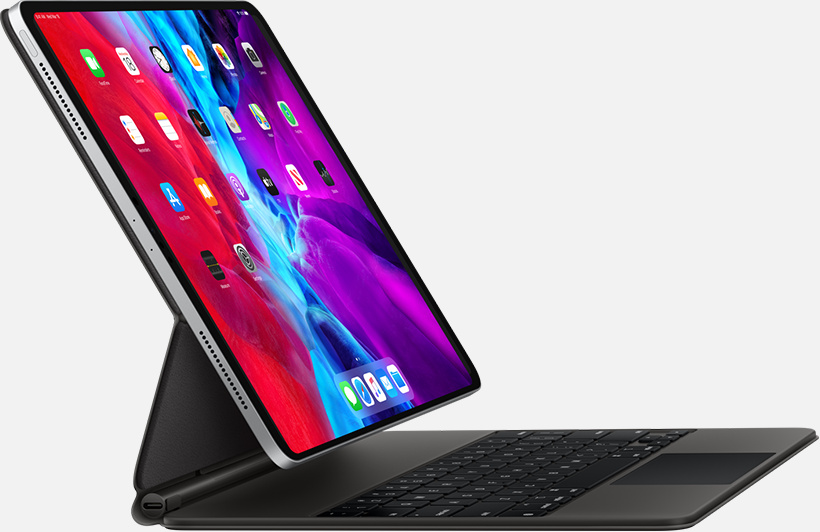 The Split View and Slide Over gestures of the iPadOS are also relatively easy to initiate when using the trackpad or mouse. If you want the display to be split between two applications, you’ll simply need to open an application from the dock and then drag this said app to the screen’s right or left side.

Augmented Reality And The LIDAR Scanner

The new iPad Pro 12.9 has a new feature you won’t see on any other Apple device currently on the market. On the back, it’s got a LIDAR scanner, also referred to as a time-of-flight sensor, that’s designed to measure the overall time it’ll take to both reach and object as well as to reflect back. The main aim here is to give developers the ability to create more compelling AR applications.

Normally when one fires up an augmented reality application such as IKEA Place and the like, they’ll have to take a scan the surface or floor for a couple of seconds before they can start using the application. Thanks to the new LIDAR scanner feature, which works closely with Apple’s Neural engine and the A12Z Bionic chipset, augmented reality placements are now instantaneous. You’ll really enjoy playing games like Isle of Pigs (Angry Birds) because such 3D game boards will appear instantly as soon as you start flinging birds into nearby pigs and TNT.

The iPad Pro 12.9 continues to support the 2nd-gen Apple Pencil, which allows users to mark up documents, take notes and draw. To turn the eraser feature on and off, all you’ll need to do is double-tap the Pencil. Furthermore, charging the Pencil is just as simple and easy as it was before. There’s a magnetic strip at the top of the Pro where the Pencil can be attached and once you attach it to this strip it automatically starts to charge.

The iPad Pro 12.9 can last about ten-hours of wireless internet surfing. It generally delivers strong everyday-use endurance. If you are to use it unplugged starting from around 8am in the morning for checking emails, word processing, taking photos and streaming video, then by 5pm in the evening it should be down to around 35% or so, which means that it’s something you can use throughout the day on one single charge. The only one major downside in this department is the devices short one-meter USB Type-C charging cord. One meter is just too short and it’s hard to use it on an office desk or dining table while it charges. Apple should really consider making the cord a little bit longer.

The Pro 12.9 2020 tab has a new A12Z chipset that has an eight-core CPU as well as a new eight-core GPU that is designed to offer users a big boost when it comes to graphics performance. Users can expect very fast real-world performances as well. This Pro will take only around 35 seconds to export one 4K video content piece to 1080p after a color filter is applied. The A12Z chipset also helps deliver more graphics muscle.

The new iPad Pro 12.9 represents a very important milestone in the iPad journey. By providing users with a real keyboard that has a touchpad, it’s now very close to matching, and even beating, both the Surface Pro X and Surface Pro 7. In addition to all this, it also gives you longer battery life and snappier performance for your hard-earned cash. Overall, the iPad Pro 2020 is definitely something you should consider if you’re looking for something that’s a tab first and then a laptop second. Furthermore, the Magic Keyboard accessory is a feature that Pro owners will want as far as typing is concerned. It’s a game-changing feature on the most versatile tab device in the world.

What generation is the new iPad Pro 12.9?

This is a fourth-generation iPad model.

While this new version is slightly smaller than the model that was released in 2017, it might be still too big for some people. That being said, it’s something that can still be overlooked considering how good of a device this tab is.