The iPad Air is back. Yes, the underrated, awkward middle child in the Apple tablet family. Honestly speaking, it’s certainly nowhere near as good-looking as the baby of the bunch, the 7.9 inch iPad Mini tab, and the fact that it has kept to its traditional look make it somewhat like a wallflower when pitted against its head-turning, eye-catching premium counterparts the iPad Pro 12.9 and the iPad Pro 11. In fact, some might not even think it’s important in 2019 and beyond. 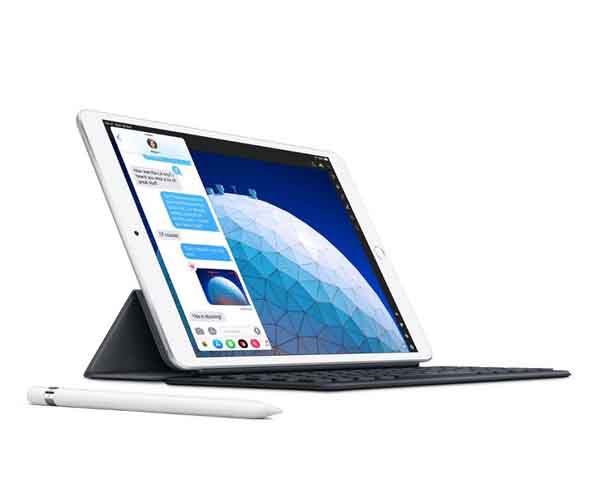 However, once you get the chance to use it for a while you’ll notice that it might have specifically designed for those people that are looking for something that’s slightly above what entry-level tabs, such as the iPad 9.7, have to offer. The iPad Air 2019 has a higher resolution front camera, a faster chipset device that matches the power you’d find on a iPhone XS and a superior 10.5-inch screen display. But, that’s not all. There are also a few other new options on it. It doubles the performance numbers found on the iPad 9.7, it has fantastic Apple Smart Keyboard compatibility. It’s overall an excellent 2-in-1 productivity device and perfect for those going back to school. 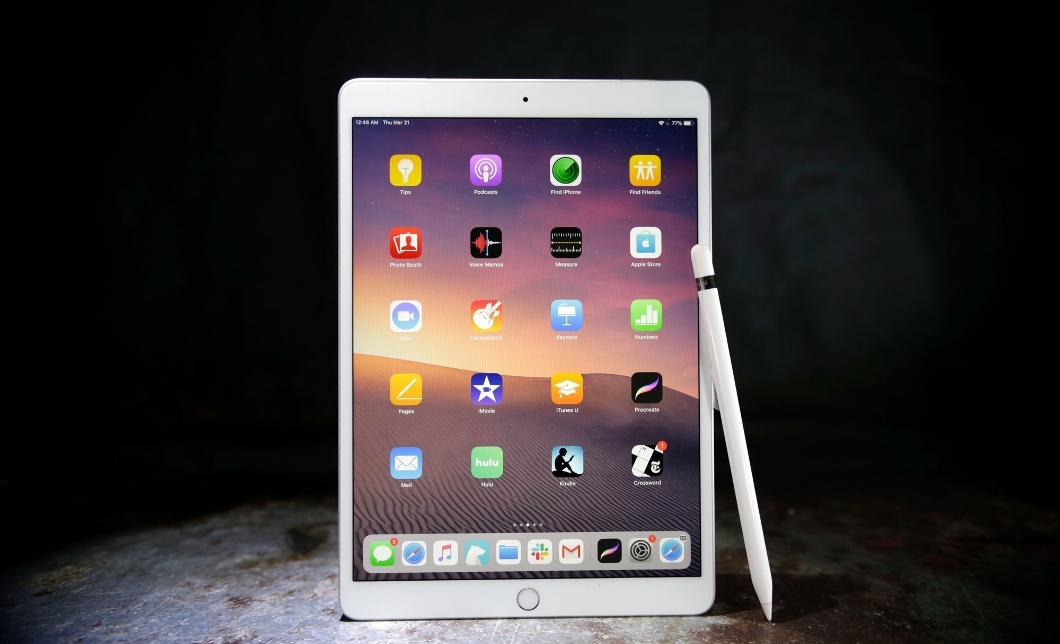 This iPad Air is basically a repackaged 2017 iPad Pro, of which they stopped selling. The Air 2019 looks almost identical to its Pro 2017 extinct cousin with a solid ten-hour battery life and a considerably affordable price tag. It’s the most reasonably priced iPad with 2-in-1 functionality and real power.

At first glance, this new iPad Air really doesn’t anything unique about its overall look. It looks pretty much the same. What we’re saying here is don’t go looking for this tab expecting huge changes on the looks department. It doesn’t have that Apple wow-factor the iPad Pro 12.9 and iPad Pro 11 have. However, there are a couple of new fan-favorite features on it you won’t get with the new Pros. These include the Touch ID button and the ever so reliable 3.5mm headphone jack. When it comes to the size, while it’s subtly different from the 9.7-inch iPad versions, it allows fo the attachment of the full-size Apple Smart Keyboard. 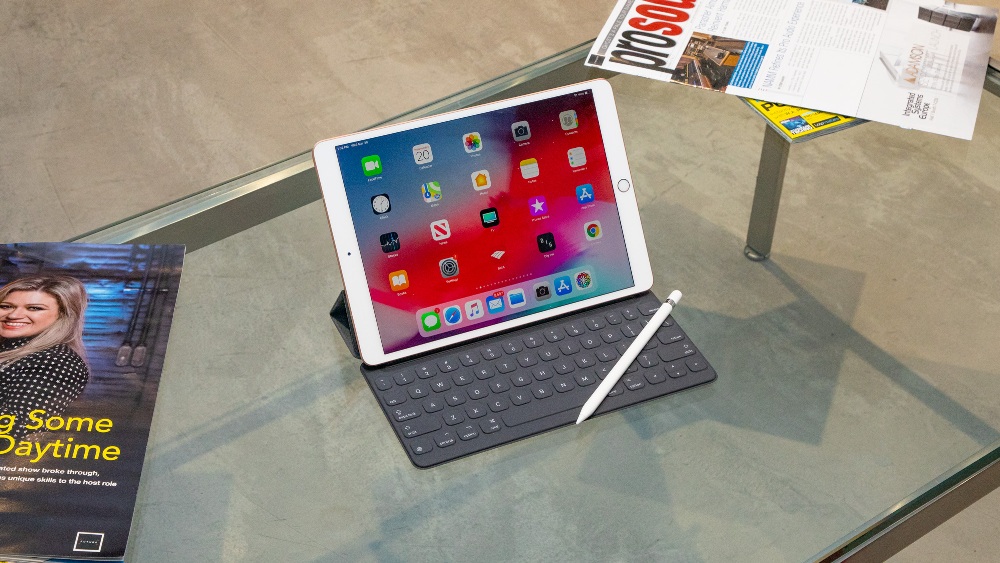 This is also the thinnest iPad on Apple’s roster that isn’t a Pro coming it at 6.1mm and weighs around 456grams. The ‘Air’ title it has actually has a legit inner meaning, seeing as how only the Mini weighs lighter than it coming it at around 300grams. This model has the traditional lightning port, which is unlike the USB Type-C connections the Pros use. It’s okay for those of you that already have many lightning cables, however, the people that have new Macbooks might already be prepared and ready to move into the USB Type-C future. One big omission, though, is the fact that Apple didn’t include the quad speakers you’d find on the Pro 10.5 of 2017. This one just has 2 speakers at the bottom.

You can get the Air 2019 in a space gray, gold or silver color scheme. The first option has a black front and the rest a white one. There often special gold units that look a little like copper or Rose Gold. However, oddly enough, this new one doesn’t have a Rose Gold option. In fact, there’s no Apple iPad currently on sale that has a Rose Gold option.

This Air 3 (2019) is the first one of its kind to have a 10.5-inch Retina screen and thinner bezels. This is way better that what the 9.7-inch non-Pro tabs have going on. This is in large part because of the wide color P3 palette and the fully laminated display. The laminated screen display means that there’s nearly no space between the LCD panel underneath and the thin glass on top. The screen is pressed to the glass which allows colors to really pop. Once you’ve seen the difference between this display and what you’ll find on the cheaper iPads, you really can’t unsee it again. It even becomes a bigger deal when using the Apple Pencil to draw directly on to the display. 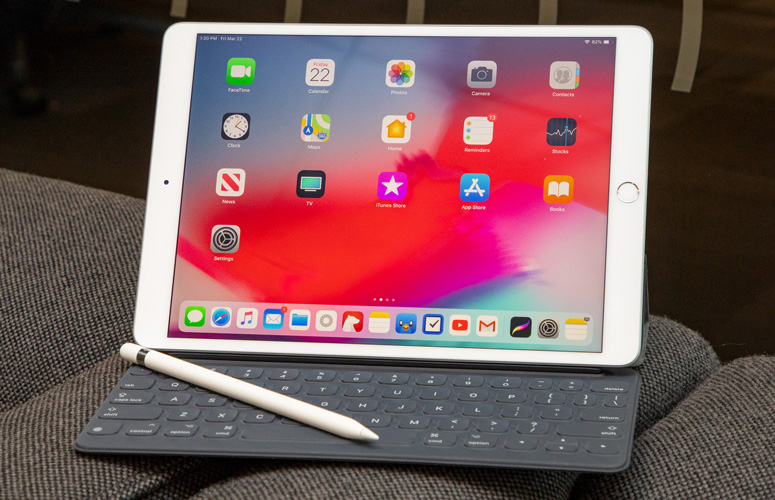 There’s a little more yellow on this screen than on other iPad Airs, and that’s largely because of the fact that it uses the True Tone display tech manufactured by Apple themselves designed to better adapt to different environments. When this setting isn’t enabled, the display will look very blue in moderately lit office settings. In open-air environs, the display has an anti-reflective coating feature that is exclusive to all Pro models as well as this new Air.

The anti-reflective coating, True Tone display, wider color palette, a laminated screen and thinner bezels might just be enough to convince folks to buy the Air 2019 over its iPad 9.7 counterpart, which doesn’t have any of these features.

A big reason why anyone should look to get there hands on this new Air rather than the more affordably priced 9.7-inch iPad is because of the Apple Smart Keyboard compatibility. It’s something you just can’t overlook when searching for an iPad that has 2-in-1 productivity. This is the most affordable iPad tab that has Apple’s Smart Connector. This is what magnetically fastens the bottom of the tab to its tri-fold, fabric keyboard cover. You can avoid having to fumble around with other 3rd-party Bluetooth keyboards that are usually unreliable.

Low-pile keys are what you’ll be forced to use, which won’t be such an issue for those of you that have already adjusted to recent Mac Magic keyboards and Macbooks. Something different about this keyboard is that it’s got a custom-woven one-piece fabric design accompanied by 64-keys that have been etched out using lasers. Not only are laser-etched fabric keys pretty cool but they also have some real-world advantages as well. They’re stain and water-resistant as well as impervious to debris. 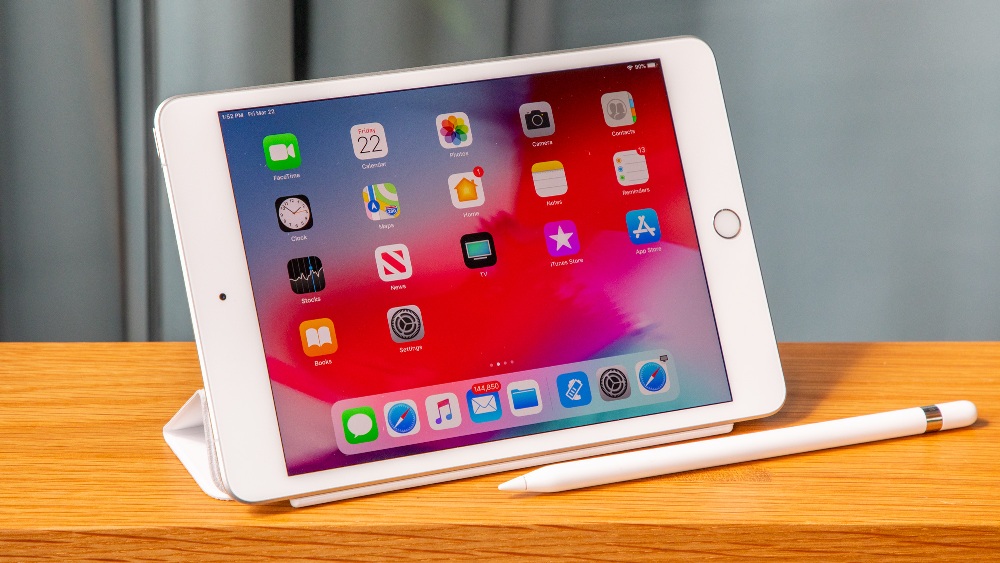 When it comes to software, the Air 2019 runs iOS 12. It makes it easier to navigate the device when compared to when you’re using the iOS and definitely when it’s the iOS 10. That being said, the whole world is waiting on the iOS 13 to come and change everything. This, alongside the Apple Smart Keyboard, make it easy to accomplish simple tasks, such as writing reviews etc. It’s also a fantastic way to control the lights as well as other Homekit-compatible devices through the Apple Home app. The other minor perks the iOS 12 has is redesigned Apple News application, compatibility with 3rd-party password managers, Screen Time and deeper battery life stats.

Apple has very many iPads on their incredibly diverse lineup. However, there’s something interesting that not many people know about. All these iPads have similar battery lives, which is an average of ten hours of listening to music, watching music and surfing the internet using WiFi. The new Air 2019 is no different but depends greatly on how the device is used. It has incredible standby time, so off/on usage should give you usage throughout the entire day, and night. If you aren’t using it frequently, then it should be able to last you close to a week.

If you use the tab like a laptop, playing AR games and doing numerous tasks on it, then you will notice a dip. Photo and mail editing is what drains the battery the most among all the apps. On the Cellular+WiFi version, you’ll notice a dip when you solely rely on the SIM card. If you want to save battery life, get used to low-power mode as soon as you can. Some good news, though, is that this happens to be the frist Air that has fast-charging. This has often been exclusive to the newer iPad Pros, which means you’re probably not going to find it on the older, cheaper iPad 9.7s

.Their Air 2019 needs to charge for around 15-minutes to get the charge to 18% and around 30-minutes to get to about 35% when a USB Type-C is being used to charge it. To get a full charge you’ll need to charge the tab for about two and a half hours or so, which isn’t too bad. Also, when you use this cable, the iPad turns on very fast. While this cable is sold separately, it’s totally worth it.

If you’re in search of a ten-inch iPad that can double up as an entertainment center and mobile sketch/notes station, then the Air 2019 is just what you need. Yes, the iPad Pros happen to be way more advanced and the first-gen Apple Pencil is kind of a pain, however, it does everything you’d need a tab to do brilliantly. Furthermore, the screen on it is arguably the best you’ll find on something at this price point.

Additionally, battery life and performance is good enough for most people out there. With Android not putting up so much competition, this tab can reign supreme as top dog. Yes, the Air 2019 may not be the mos innovative iPad available, however, the fact that it has gotten all the basics down means it has can rightfully be considered one of the best tabs currently on the market.

The latest version of the Procreate software is out and that’s what a lot of people are looking to run on their new iPads. Fortunately, the Air 2019 is one of the iPads that can run this new software.

I does have wireless charging capability. In fact, there’s a QI Certified Wireless Charger, with fast charge functionality, specifically for the iPad Air 2019. There’s also a 10-watts Wireless Charging Pad from Apple that you can use.

Most users will be completely satisfied with the 64GB model, especially if you’ll be using the tab primarily for work purposes. If the Air 2019 is going to be used downloading productivity apps or answering emails, then all should be well for you.