Nothing enhances top PC game titles like a good quality PC gaming headset. The surround sound and improved audio detail creates for you an immersive overall atmosphere, turning footsteps of your enemies into dead giveaways of their locations. Single-player missions or campaigns will become journeys you can’t afford to back out of. Additionally, when it comes to online gaming, a great microphone turns the whole session into somewhat of a social experience, giving you the ability to coordinate your tactics and communicate better with your teammates. 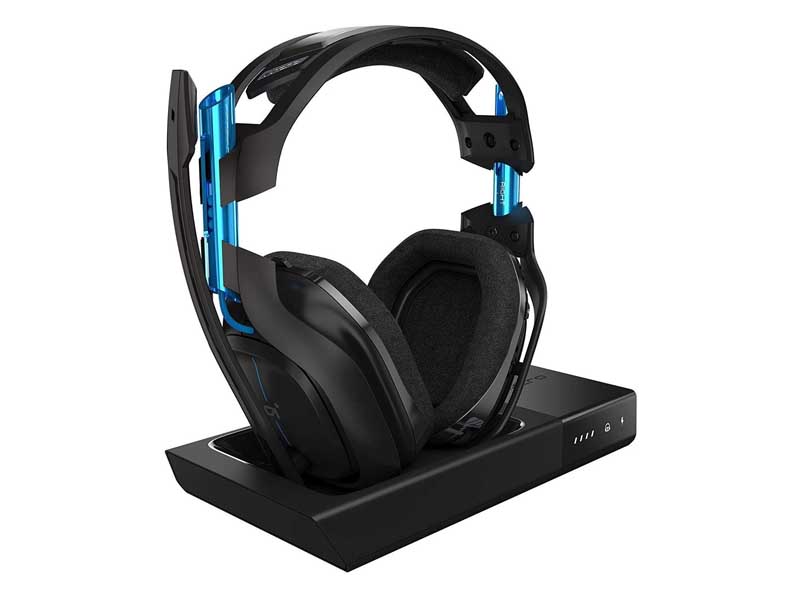 The gaming headset we’re looking at today does all this and more. Though, at that price point, it really should. Anyway, thanks to its Dolby Pro-Logic Ilx setup, the Astro A50 headset provides digitally mixed 7.1 surround sound. If you’re looking for something that will let you feel the enemy rockets ripping right past you, then this is definitely a headset that can help you achieve this.

Furthermore, they’re also versatile enough to be used for listening to music and watching movies. Lastly, they’re also compatible with PC/Mac, Playstation 4 and X Box One S straight from the package adding more versatility to them. Anyway, while the A50 wireless aren’t perfect, they certainly come close to it.

Not only does this headset come with great audio power but it’s plus-sized as well. The A50 Wireless headset is bulky and big yet it’s still quite surprisingly comfortable. Every single part of the headphones that touches your head is covered in a soft, foam-like material. Yes, you’ll definitely notice how heavy it is once you place it over your head, however, this foam-like material they’ve used helps make it a bit easy to wear. While watching movies or during long gaming sessions, you can almost forget you have them on because of this feature. 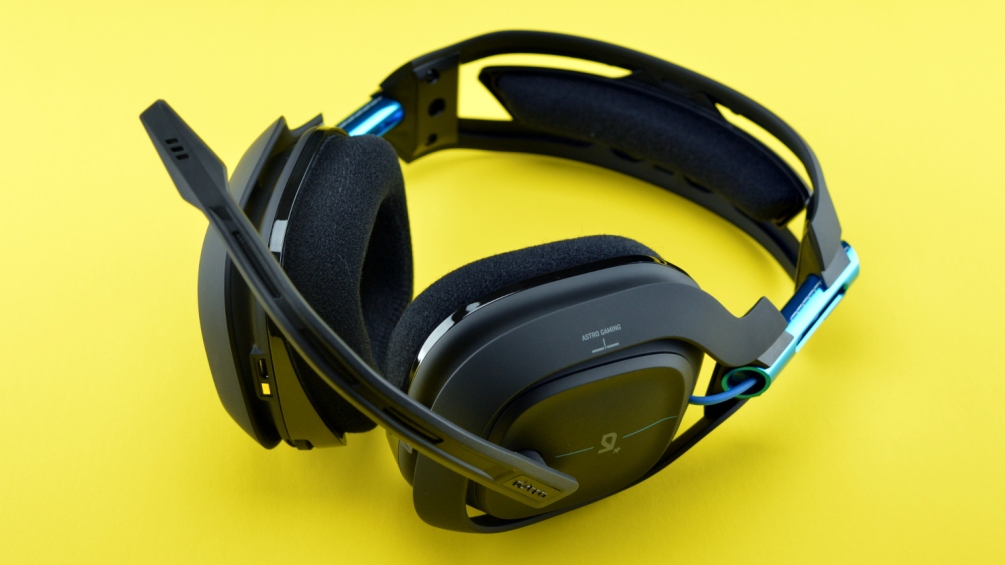 The fit, on the other hand, isn’t the greatest. If you’re accustomed to tight fits, then this particular headset will feel a little loose. If you crank the headphone’s sound, folks around will hear faint sounds. Being that the unit is quite big, Astro decided to go with a stealthy overall color scheme. Its matte black finish gives it an attractive and subdued aesthetic. It has some semi-exposed cables that are red in color which run up on the sides and serve as eye-catching highlights.

The mic is durable, super bendy and has this one unique and interesting feature whereby when you point it straight up it locks and mutes. Okay, yes it’s a convenient and neat feature, however, being able to just simply remove the microphone altogether is an option that would still greatly be appreciated.

The Astro A50 headset is strong in all the places that count, one of which being sound quality. In fact, the sound quality is so strong that you can even use it to try and justify its heavy price tag and hefty build. These headphones offer that all-around stellar audio, with outstanding localization that’ll help enhance all your gaming experiences with it. It has a considerable amount of both bass and power, yet it still manages to retain great audio fidelity devoid of undo distortons. While nothing can really replace a true and pure physical 7.1 speaker unit for movie watching and the like, the A50 Wireless headset comes really close. 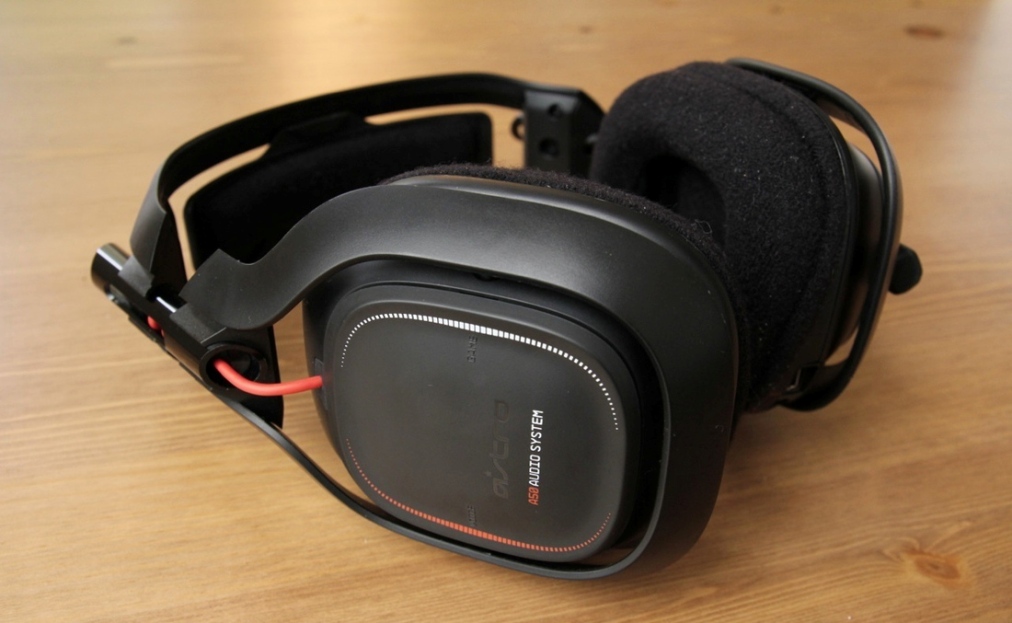 It has very high-quality sound mixing because it’s a software-simulated 7.1 device. The mix it offers is both wide and nice, conveying that large sense of space which is usually vital in titles such as Battlefield and the like, where localizing the footsteps of your foes could mean life and death. The mix on the A50 headset is similar to the one on its Tritton Warhead 7.1 headset counterpart, another headphone product that employs the use of Dolby Pro-Logic Ilx.

The Astro has 3 equalizer settings; Pro (turns up treble for better footstep and gunshot detection during gaming), Core (for evening out all the levels) and Media (for increasing bass). Media is ideal for when you’re using the headset to listen to music and watch movies because it provides booming bass sounds without becoming distorted or overshadowing dialogue. While this product is first a gaming headset and then second a stereo alternative, you won’t insult audiophiles by making them use this product to listen to their favorite albums.

One of the best things about the A50 headset is how nicely it plays with other toys. As long as there’s an optical port present, the Astro will be compatible with it straight from the box. If a device doesn’t have an optical port, say like a Macbook or something of the sort, then it’ll only be able to connect to this particular device via a standard 1/8th inch speaker cord. Once this cord has been plugged into the transmitter, syncing becomes relatively painless. In addition to this, the Astro also has a Quick Start Guide feature that explains to users how they can connect the headsets to a Xbox 360S, PC or Playstation.

For most setups, it uses 2 connections; optical and USB. After you’ve plugged into these 2 ports, syncing will be accomplished after you press a button on the headset as well as the transmitter. You’re connected when the LEDs flash. When switching between different consoles, it can get annoying having to plug and unplug all the time. Syncing is much easier and always reliable. 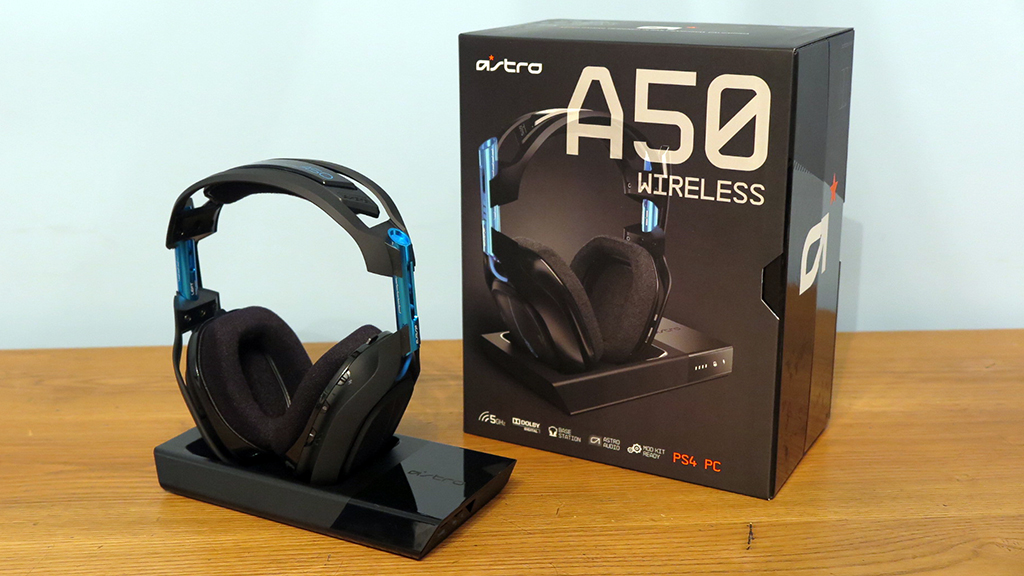 Interface simplicity is very important. When taking heavy fire in Overwatch/Call of Duty or when your smack in the middle of a high-octane and explosive cinematic climax, you certainly won’t want to have to fidget with volume controls during this time. While the interface on the A50 isn’t complicated, it isn’t as easy as one would expect either. You’ll need some time to get used to it.

As a wireless headset, battery life is what will determine how long it can go before you need to charge it again. The charging cord that comes that with Astro A50 is one that measures only three inches long, so when your charge is done gaming is basically over for you. However, that’s unless you get the Play-and-Charge cord that Astro sells separately for around eight dollars or so.

Anyway, while Astros claims that the battery on the A50 will last about twelve hours, in practice, that’s not exactly the case. In fact, in some instances, it lasts only half the specified time. The representatives at Astro say that this difference occurs because some devices, and the use of the microphone as well, can drain the device’s battery life at different rates. When you use the Astro with Xbox is when you get the best battery life, which comes to around ten hours or so. Otherwise, a more accurate average is about 8-9 hours or so.

The audio quality these headset offer is really top-notch and the sound mixing you get is also out of this world. The sound fidelity the Dobly Pro Logic Ilx is amazing as well. Any true gamer should definitely consider getting the Astro A50 headset. The fact that it has excellent sound mixing and sound fidelity, as well as the fact that they can be used on a Playstation 3, Xbox 360, Mac and PC helps make the tab worth every penny. If you exclusively do your gaming on a Xbox 360 console, the Warhead 7.1 might be a slightly better option, but that doesn’t mean that the A50 won’t give you just as much of a good time. All in all, this a versatile headset that every gamer should definitely strongly consider.

Is the microphone on the A50 Wireless detachable?

The mic is neither retractable nor removable. Instead, you’ll have to rotate it upwards if you need or just want it out of your way. In practice, it works fine, however, it means that you will always have a microphone sticking out on your head.

Can the headset be wirelessly connected to your smartphone?

No it can’t because it doesn’t have Bluetooth connectivity. However, you can connect it via its 3.5mm headphone jack port.