Corsair’s Dark Core Pro SE has found that much-needed middle ground as far as wireless gaming mice are concerned. Up until just very recently, generally there’s only been like two great options. The bare-boned, inexpensive Corsair Harpoon wireless that cost around fifty bucks or so and the more expensive, tunable Logitech G502 Lightspeed that goes for around $150. The Dark Core Pro SE gaming peripheral costs slightly under a hundred dollars and it has managed to carve a niche for being a feature-rich wireless gaming mouse that doesn’t have the price-tag of a high-end product. 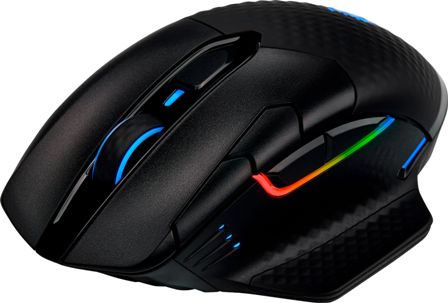 It’s really impressive the things this mouse is able to do. It has a lot of programmable button functions, it’s got swappable finger rests, two kinds of wireless connectivity and even QI charging capability. In addition to all this, it also has a long-lasting battery and is an absolute joy to use as well. However, Corsair’s iCUE software is still complex and not as user-friendly as most people would like, and it’s scroll-wheel won’t be ideal for the productivity power user because it’s not that fast as well. However, for its price, this wireless gaming mouse does quite a lot, and does all these many things very well. 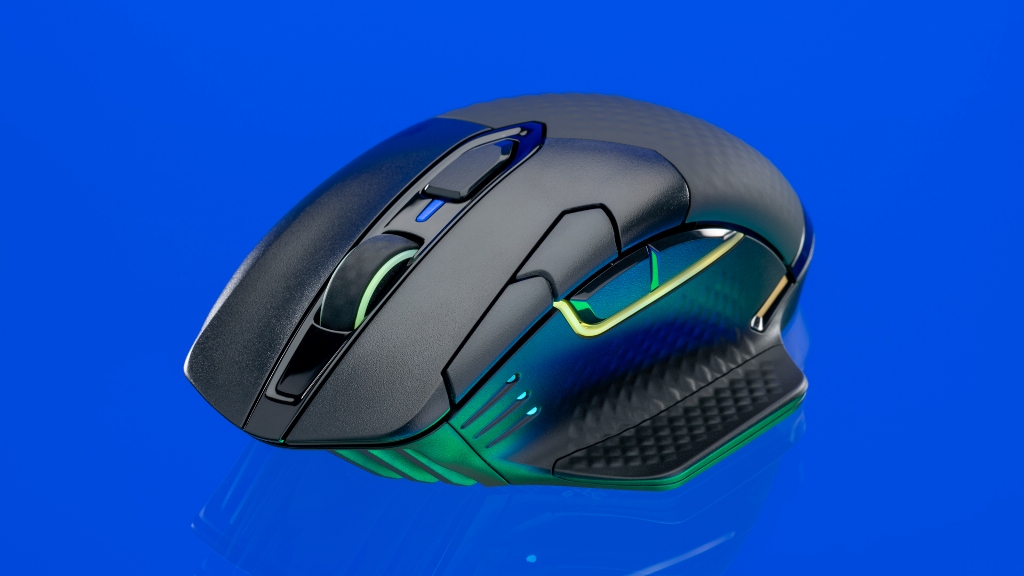 If you’re familiar with other previous Dark Core mice on the Corsair roster, then you should be pretty familiar with the Pro SE’s design. It looks very similar to the other devices that came before it. It’s a relatively high-profile, large gaming mouse with a textured scroll-wheel, a textured palm wrest and a textured thumb rest. The far end the gaming mouse, by default, is incredibly smooth, however, it can be replaced with a textured rest. This is a nice inclusion on a gaming mouse that’ll set you back not more than one-hundred dollars. Furthermore, swapping these 2 parts is a breeze, as they use magnets to stay in place.

When it comes to the buttons on the Pro SE, it has a clickable scroll-wheel, a right button, left button and, lastly, a face button function that can switch profiles by default. There are also 2 button functions on the upper-left that can be used to adjust DPI (dots-per-inch) sensitivity down and up. There are 2 thumb buttons one side, though, the fact that it doesn’t have that 3rd “sniper” button function might kind of be a downer for the first-person-shooter enthusiast. Though, it also may have made the whole thing feel too crowded so maybe the lack of it isn’t such a bad thing. Underneath the gaming mouse, you’ll find a sliding button feature that can be used to switch between 2.4GHz wireless connections and Bluetooth.

It is also worth noting the LED strips on the Dark Core Pro SE. Most RGB gaming mice simply light up a palm rest logo and the scroll wheel and that’s about it. This particular gaming mouse is considerably more aesthetically-pleasing, with illumination strips on both sides of the mouse’s base and beneath the thumb button functions as well, Corsair make the mouse look more futuristic and colorful, especially when programmed with a rainbow color pattern. There are 9 RGB lighting zones, each one customizable. Okay, that’s a typical feature found on a lot of gaming mice on the market, however, it’s still worth a mention considering all the things you can do with them. There’s a whole color wheel the user can pick from accompanied by numerous effects. In addition to all this, these RGB zones are actually impressively vivid and bright. If you like immersive RGB illumination, then you’ll love what Corsair did here.

The only major downside, which isn’t even that bad really, is the mouse’s textured surfaces kind of feel too conservative. A textured grip usually feels especially good when it’s coarse and a little on the abrasive side. The Pro SE’s grip are subtle, tiny bumps that aren’t much comfier than grasping a smooth surface. 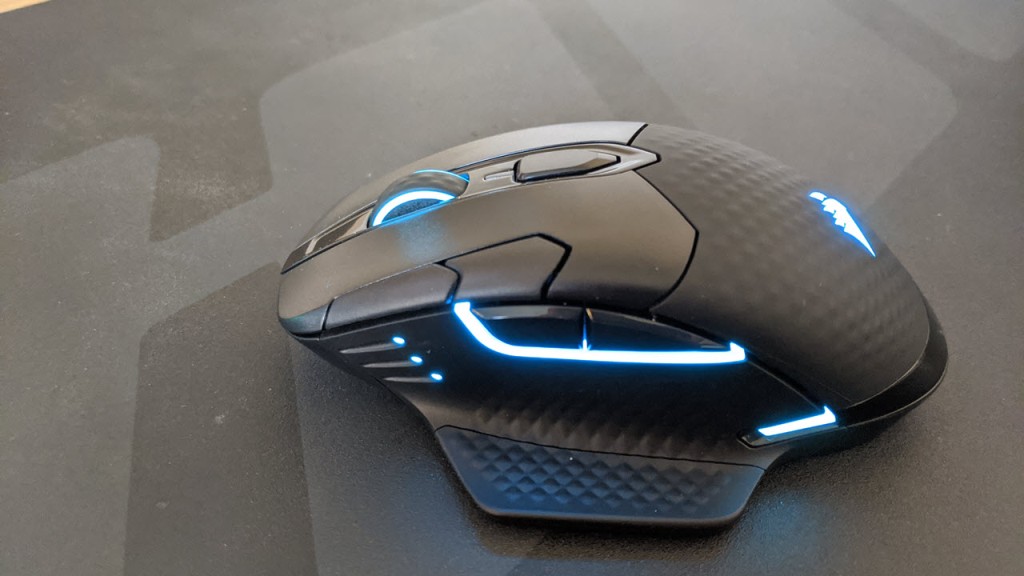 The Dark Core Pro SE gaming mouse has three main features. Its software compatibility, its QI charging capability and its wireless connectivity. For starters, a feature-rich wireless gaming mouse can easily cost you around $150 or so. The fact that the Pro SE doesn’t even go over the $100 marker is a very impressive feat in its own right. This is especially so considering it also has both 2.4GHz and Bluetooth connectivity as well as swappable parts. Both the wireless connectivity options work seamlessly without flaw, whether being used to work on productivity tasks, browsing the internet or gaming. Corsair also claims that you’ll have up to fifty hours on a single charge.

Then you have Corsair’s Utility Engine (iCUE) software. As always, this program is incredibly robust, however, it’ll take a little time before you can fully understand to use it. Anyway, this bit of tech is what you use to check battery life, surface calibration, macros recording, creating individual profiles for games, customizing the mouse’s lighting and reprogramming the button functions. Getting any one of these things done can prove quite tedious, largely because you’ll need to comb through many submenus to locate the feature you need. Yes, the Utility Engine is more complicated than most people would like, however, at least it does what it’s been designed to do very well.

What really sets this gaming mouse apart from the rest in its price range is the connectivity options it provides. It has 3 modes; Bluetooth, USB wired and Slipstream. Slipstream, which Corsair has claimed as its own wireless connectivity option done through USB wireless receivers, may just be the better mode of all three. When using the Slipstream wireless receiver, the device can be operational up to sixty-feet away from the PC. As far as USB wired connection is concerned, it’s actually the least effective of them all. The cord is sturdy and nice enough, however, it’s also a little stiff which makes it a tad bit more difficult to use. 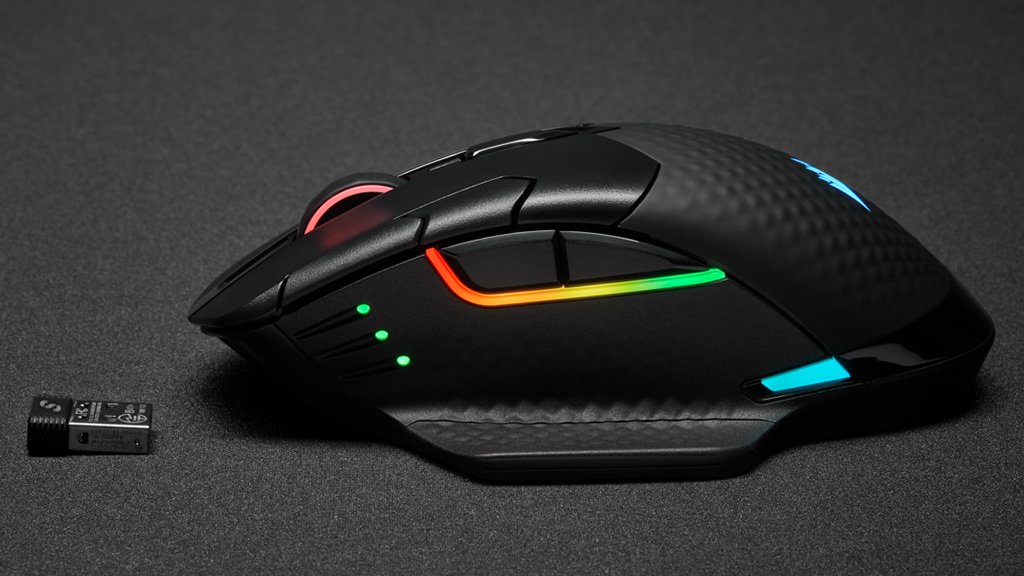 Blazing fast speeds and almost impeccable performance await anyone considering the Dark Core Pro SE gaming mouse. It provides users with such power they actually forget they’re using a wireless gaming mouse. Because of the device’s sub-1ms speed there are no discernable latencies. And with a hyper rolling rate of up to around 2000Hz and 18000 DPI, the mouse has a massive gaming advantage, whether this gaming is being done competitively or not. The extra sliding pads found underneath are extra smooth which helps make the mouse that much more game-worthy.

Anyway, it’s not surprising that it’s an outstanding gaming peripheral, considering this is what Corsair are well-known to do all day every day. It won’t give issues running any gaming genre and it’s both precise and responsive in every case. Growing your medieval army will just be as east as gunning down your foes or climbing ancient ravines.

Most wireless gaming mice often suffer from connectivity and latency issues, however, the Dark Core Pro SE isn’t one such gaming mouse. In fact, a lot of the time you’ll even forget that it’s actually wireless. Furthermore, the Pro SE not only has 3 different connectivity options and swappable side grips but it also has reprogrammable buttons and fully customizable RGB backlighting. This helps make this mouse one of the most versatile on the market right now.

Can the Dark Core Pro SE be charged without a Qi mat?

Yes, you can still charge the mouse with a microUSB if you don’t have a Qi charging mat. The same microUSB cable is what you use for wired connectivity. It can double up as a charging cable as well.

Can the mouse be paired with multiple devices?

Does it support lighting link?

No, this particular gaming mouse doesn’t have lighting link support, however, nor did the original Dark Core.