These days, gamers aren’t scared of wireless mice like they used to a while back, and for good reason too. Fidelity and lag issues are no longer a problem anymore, and the lack of a wire to distract you is itself its own reward, don’t you think? Generally speaking, there’s basically only one more sticking point that remains, and that’s pricing. A wireless gaming mouse that has come from a big-name manufacturer could set you back up to around $150 or so, especially for the customizable powerhouses. That’s a very big jump from the wired versions, which often cost around $50 or thereabout. 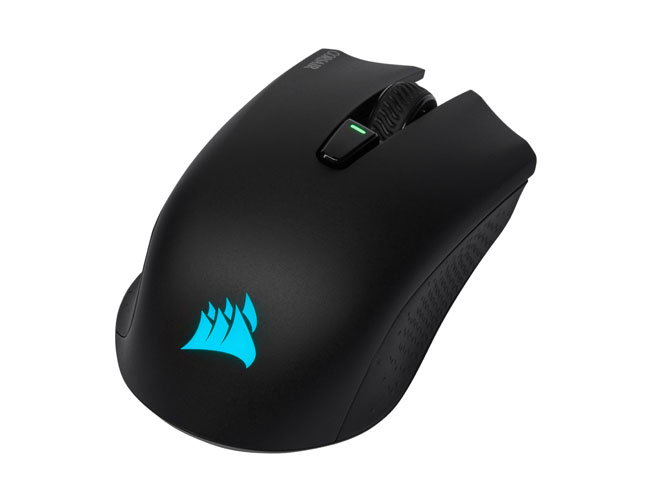 Anyway, in comes Corsair with the Harpoon RGB wireless gaming mouse. At fifty bucks, this product not only undercuts almost all the big-time wireless gaming mice in the industry, but also quite a large number of wired models as well. More importantly, the Corsair Harpoon Wireless mouse provides its user with outstanding in-game performances, intuitive software and a comfortable grip. The RGB features ar kind of a bit ancillary, and it has a shape that doesn’t necessarily fall into any particular genre, however, overall, the wireless gaming mouse from Corsair is an out-of-this-world product, and is arguably one of the best there is out there.

With that said, if you’re looking for a wireless gaming mouse that won’t hurt your pocket too much and still performs well, then you’re exactly where you need to be right now. Let us show you why the Harpoon Wireless RGB mouse is what you need in your life ASAP.

Most people will consider the Corsair Harpoon Wireless to be either a plain or understated gaming mouse. Although, this largely depends how flashy you are when it comes to the gaming mice you like using. It has a solid black chassis and a relatively tiny overall profile, measuring 4.6×2.7×1.6 inches, that’ll suit both a claw and palm grip. While the Harpoon’s appearance isn’t exactly a flaw, so to speak, the mouse kind of does look very similar to most of the many other wireless gaming mice on the market. There’s nothing really instinctive it has going on, as far as wireless gaming mice are concerned. 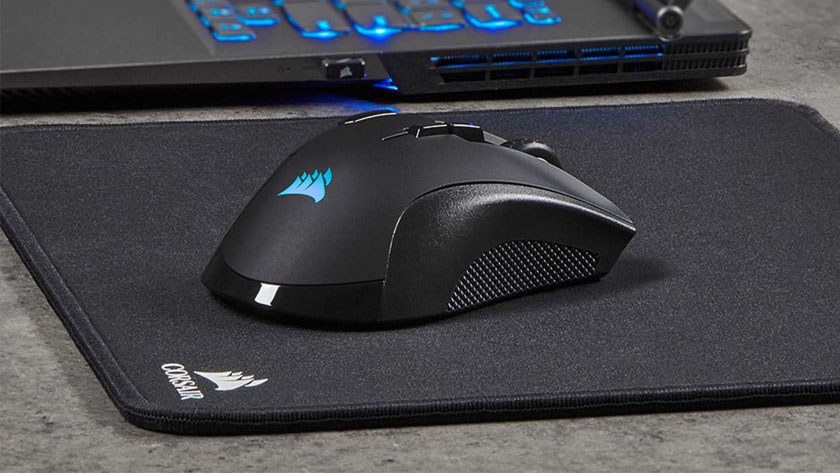 That being said, it has pretty much got everything you’ll need to effectively tackle your everyday multiplayer or single-player PC game. It has textured grips for the two outermost fingers as well as the thumb. It also has two thumb button features on the side, a DPI (dots-per-inch) sensitivity button underneath it and a textured scroll wheel. Everything offers a satisfying click and are all easy to reach.

The only major downside on the Harpoon comes in the RGB department. Other Corsair gaming mice have lights on both the scroll wheel and palm rest, however, the Corsair Harpoon only has RGB lights on the scroll wheel. This means that users will barely ever get to see that fancy, customizable RGB lighting because your hand will probably be covering it most of the time. Given a choice between never getting to see the RGB illumination and no lighting at all but at a cheaper price, a lot of gamers will most likely opt for the latter.

The Harpoon Wireless’ most important feature is right in the name. This gaming peripheral is one of the more affordable wireless gaming mice that comes from a big-time manufacturer. Other gaming mouse products that are similarly priced often tend to be tinier, laptop-oriented devices, like Razer’s Atheris, or those that use disposable batteriessuch as the Logitech G305. Anyway, not only do the Harpoon’s wireless features work flawlessly, but you can also easily switch between Bluetooth and USB. This is quite impressive, considering the fact that there are pricier gaming mice that have USB-only setups. 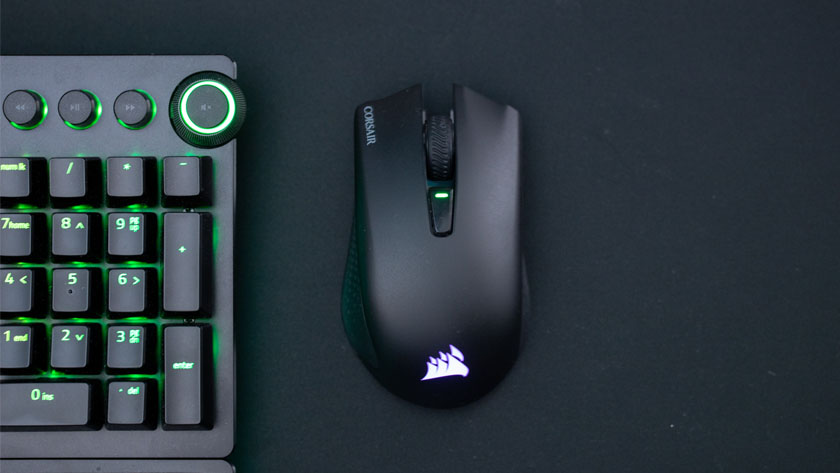 This is a mouse that can definitely hold its own in aggressive, tournament-style playing conditions. The wireless features on it work more than just fine, without misinterpreting commands or exhibiting lag. Both the Bluetooth and USB settings worked extremely well, although it sometimes fails to properly reconnect when using Bluetooth after the computer has been restarted or rebooted for one reason or the other. Truth is, this is somewhat of a very minor point, when all is said and done. Oh, and another great feature is the fact that it has a small compartment underneath it that can be used to store the USB dongle. This makes it a lot harder to misplace/lose this small accessory.

Beyond that, all the buttons on the mouse can be reprogrammed (except the left-click button), specific profiles can be created, lighting can be customized and DPI levels can be changed using Corsair’s Utility Engine software. While the Corsair Utility Engine software has somewhat of a higher learning curve compared to the programs from Logitech and Razer, there’s also a lot more users can do with, especially when it comes to creating inventive illumination profiles. Furthermore, it also allows you to monitor fan speeds as well as GPU and CPU temperatures via the Utility Engine’s Dashboard feature. However, you can also entirely ignore this bit of technology if you intend on using the mouse straight from the package.

As far as the mouse’s battery life is concerned, Corsair claims that users can get up to about sixty hours, with all the lights of in Bluetooth mode, on a full charge. Okay, this might not be a very realistic claim, however, the mouse does actually have a lot of power to spare. If you are to use the mouse for three days, for both productivity and gaming, the battery will drain to around 65 percent from 100 percent. This means that you can use the mouse for around 7 days on one full charge. Furthermore, the Harpoon can also be charged while being used to game, thanks to its long USB charging cable.

The original Harpoon mouse was meant to be sort of like an entry-level, jack-of-all-trades gaming mouse. The Corsair Harpoon Wireless gaming mouse performs very similarly to its predecessor. It handles games like World of Warcraft, The Witcher Tales, StarCraft: Remastered and Destiny 2 very well. Optimizing your deck of cards in the Witcher Tales is as easy as shooting down enemies in the Destiny 2 titles. The two thumb buttons also come in handy when you want to program some extra commands. 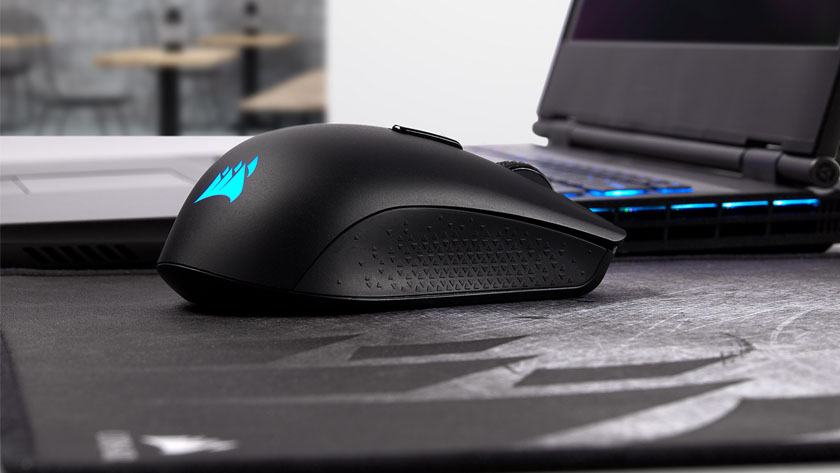 The only caveat when it comes to the mouse’s overall performance is that we’re not completely sure how it would hold up in the rigorous, highly-competitive esports tournament sector. It lacks extra “sniper” button functionality for FPS gamers, and its overall design-style does not seem optimized to any particular genre. Then again, at the esports tournament level, the one thing that most gamers in this sector want to know is whether the mouse is comfortable enough, and that it certainly is.

Corsair’s Harpoon Wireless is a gaming mouse that’s almost too good to be true, especially because of it’s incredibly low price-tag. That $50 marker is not a dream. It’s very real. This would’ve been an outstanding wired gaming mouse product, however, the fact that it also happens to be wireless (which, from an engineering standpoint, is infinitely way more complicated) makes it all the better. If you’ve been strongly considering getting your hands on a wireless gaming mouse, but you just could not stomach having to break the bank in order to get one, then the Harpoon Wireless is the perfect way to get a wireless mouse experience cheaply.

Corsair has managed to eliminate all the pretense usually found in the wireless gaming mouse product and have come up with a device that is both low in price and high in functionality. The Harpoon Wireless RGB mouse neither the most feature-rich product, nor the cheapest wireless gaming mouse out there, however, it strikes a very good balance between the two. Unless you’re specifically looking for a fancy wireless gaming mouse, or something a bit tinier, it’s really difficult to come with a reason why anyone should pass on this spectacular gaming peripheral.

What sensor does the Harpoon RGB Wireless use?

The Corsair Harpoon Wireless RGB gaming mouse is built to provide the user with excellent all round performance and features a 6000 DPI optical sensor, which has advanced tracking designed to offer precise control. It also has a contoured, lightweight overall design to help support very quick movements.

Can you use the Harpoon Wireless on a Mac computer?

The Corsair Harpoon Wireless gaming mouse itself should work just fine on a Mac. However, the Corsair Utility Engine, on the other hand, will not work on a macOS. So improving and updating the mouse is something you won’t be able to do.