More and more gamers around the world are starting to put their focus on wireless gaming peripherals, and there’s a good reason for this. From the all-round quality provided by Logitech’s 915 Lightspeed to the functional performances offered by the Razer Turret, the wireless gaming board has gradually managed to become the talk of the town and are in abundant supply. Whether you’re intending on making your desk look a little tidier or whether you’re just looking for something that can be used while you lounge on your sofa, nowadays there’s literally something for everyone. However, today, we’re going to be focussing on the Logitech G915 Lightspeed and Corsair’s K57 XT RGB.

Many of the wireless gaming boards available on the market don’t come cheap. In fact, there’s a high chance you’ll probably have to break the bank because of their often high-tech software and top-tier key switches. However, the K57 XT RGB wireless keyboard by Corsair really tries hard to split these differences. This wireless gaming board provides players with not only Bluetooth and USB-cable connectivity but with full RGB illumination, full media-bar and a macro keys column as well. You get all this at basically a fraction of the total price. Though, unfortunately, membrane key switches are what’s used in the K57 XT device.

If you love products from Logitech, then you’re probably going to like this next one as well. The G915 Lightspeed gaming peripheral is a wireless keyboard product that has almost no compromises. But, it’ll cost you a pretty penny though. That being said, it’s really difficult to find other wireless gaming boards that can outperform the G915. This sleek and aesthetically pleasing keyboard features mechanical key switches alongside low-profile key functions.

At first glance, the most noticeable thing about the K57 XT RGB wireless peripheral is the keyboard’s large size. This board is nowhere near small measuring in at about 19.0×9.0 inches. It’s also accompanied by a palm rest that measures about 19×6.5 inches. The K57 wireless XT by Corsair is a whole two-inches longer than a lot of its full-sized gaming keyboard counterparts on the market. This is largely due to the fact that it has an extra column of macro key functions, which means you’ll probably need to know the amount of desktop space you have to spare before you purchase a keyboard this big. Besides its considerably large size, it has a simple look going on. Black plastic material is what’s used to make the chassis and a glossy bar is attached to the top of the board and it’s there for the collection of fingerprints. 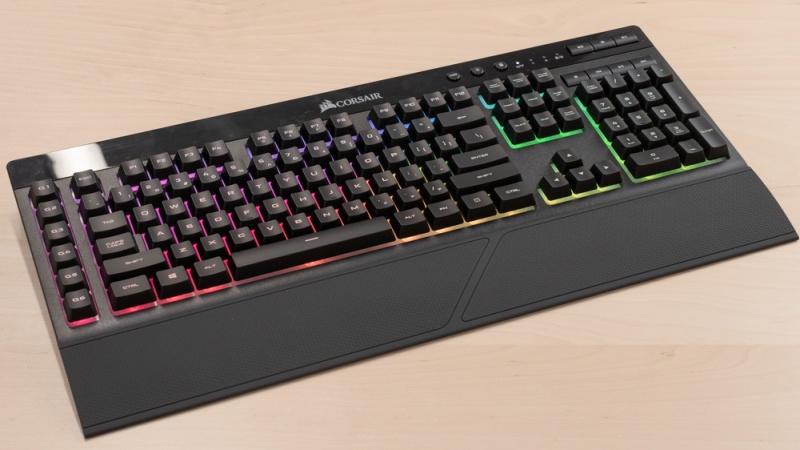 The extra key column on the K57 XT keyboard has 6 button functions and its discrete media features are located at the top-right end of the peripheral, which consists of 7 buttons in total. The discrete media functions include rewind, forward, pause, play, stop, volume down, volume up and the mute button functions. You’ll also find extra key functions for macro programming, brightness adjustment and the Game Mode lock features. Additionally, it also has keyboard shortcuts gamers can use to toggle through the USB-cord dongle and Bluetooth options.

The G915 Lightspeed by Logitech is a very good-looking mechanical gaming keyboard. Its brushed metallic finish accompanied by its sturdy, firm plastic chassis helps give it that sleek, futuristic overall aesthetic. On the peripheral’s left side there’s a column of macro key functions, 3 macro key profiles and a macro record feature located next to the F1 to F4 buttons. The USB dongle, as well as Bluetooth connectivity, buttons are found next to the F4 to F8 buttons. In this area is where the Game Mode and RGB illumination brightness buttons can be found as well. 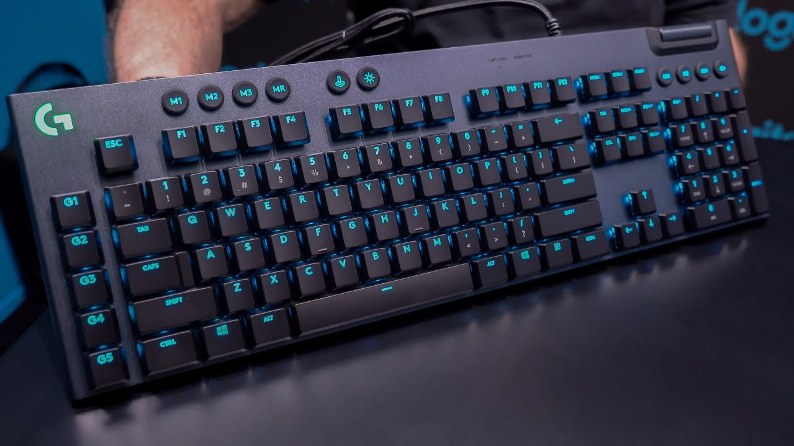 The major downside the Logitech G915 has is the fact that it contains 5 extra button functions on the far-left. This is something that most gamers will deem situationally useful at best. Furthermore, the inclusion of these extra key functions on to the board makes it longer giving it a measurement of around 18.5 inches. This is basically a whole inch longer than many of its other full-size counterparts on the market. This is sure to make a big difference for those of you folk that don’t have much desk space to maneuver with. Also, the Lightspeed doesn’t have a palm rest included in the package. Which can prove pretty cumbersome seeing as how thin and low-to-the-ground the product actually is.

The Corsair K57’s biggest downside comes in the form of the keys it chooses to use. Unfortunately, the keyboard is membrane-based and the keys are similar to what you’ll find in the cheap computer models by Microsoft and Dell many middle management workers love to use. Using such keyboard products will help make one realize just how advantageous mechanical switches can really be, especially in out-and-out gaming scenarios. Membrane-based keyboards are actually the most ideal choice when all you have to spare for such equals around $30 t0 $50, but, it’s a little bit harder to justify one that might just end up setting you back over $100 or so.

Anyway, the good thing is that Corsair has tried their best to make the keys feel slightly better than what you’d get with standard, run-of-the-mill membrane keys. However, this attempt isn’t one that can be considered a 100-percent success. The board’s key switches still have this slight resistant, stiff feel to them. When it’s used for typing, if feels like your fingers are being actively pushed away after the press. Given, this you won’t notice when using the board for play, however, when you’re breaking the bank for a keyboard you’ll most likely want one that can be used as a productivity device as well, right? It has to be able to do way more than gaming.

The Lightspeed gaming keyboard employs the use of an entirely new kind of key switch. Okay, to be as accurate as possible, it features 3 types of switches. Just like the way gamers can purchase Corsair boards and then choose the kind of Cherry MXs they want, with the G915 Lightspeed device they can also choose between GL Tactile switches, GL Clicky switches and GL Linear switches. Logitech’s new, low-profile mechanical key switches give the user equally as much key travel distance as the Romer-G switches. But, it does so in a much tinier, more compact overall package. Getting used to the new low-pro mechanical switches on the Lightspeed might require a bit of time, especially if the device is intended mainly for typing duties. The smaller caps it contains make it way easier to accidentally push adjacent keys

The Corsair keyboard uses the robust but slightly limited iCUE software. The Corsair Utility Engine is something that was manufactured in-house by the company themselves. It gives users the ability to customize RGB illumination profiles, create unique settings for individual games and applications, program macro key functions and reassign certain keys. As much as it runs superbly without a hitch, unfortunately, the Utility Engine doesn’t blend in well with Corsair’s K57 XT wireless RGB board. Key programming is a lot more complex than you’d expect, and, when it comes time to program macro shortcuts, you’ll be required to use an incredibly tedious and cumbersome macro recording menu.

But, arguably the thing that’s most annoying about the K57 XT wireless gaming peripheral by Corsair is that it does not have the deep RGB illumination setting options that you’ll come across in numerous other Corsair keyboard products. This is a little disappointing because the Corsair Company is world-renowned for the insane deep lighting options their gaming keyboards often have on offer. In the case of the Corsair K57 wireless XT board, they provide users with only 9 color patterns in total. Granted, some of them are actually really gorgeous, however, it still doesn’t even come close to what one would expect from gaming keyboard made by Corsair.

The G Hub software from Logitech themselves is what’s used to run the G915 Lightspeed keyboard. It can be used to set up a wide variety of color schemes and patterns, from beautiful, reactive rainbow profiles that are displayed all across the board when someone presses a key to individual per-key lighting. It also allows users to create specific profiles and program macros functions for certain programs and game titles. Unlike most of its competition, the Lightspeed gaming peripheral doesn’t allow for the reprogramming of its entire key functions. But, the fact that you have extra macro key functions available might mean you not having the need to reprogram keys.

However, the biggest upside and most noticeable advantage the Lightspeed by Corsair has is the board’s wireless functionality. You can connect to the keyboard via Bluetooth connectivity or via USB dongle. What this, theoretically, entails is that this peripheral can be simultaneously connected to both a PC and smart device, like a tablet or smartphone? Furthermore, switching between said devices can be done with literally one push of a key. Additionally, both connections can be operated even when several feet away.

This Corsair keyboard can run most, if not all, of the popular PC game titles very well. Don’t expect to get a stiff feeling from the keys during gameplay. It can handle games such as Overwatch, Final Fantasy and Age of Mythology with relative ease. In fact, you can be sure that it’ll run games from all genres without giving you much of a problem. Users will be able to both accurately and easily look through skills and special ability rotations in Final Fantasy and navigate through hug Overwatch maps without having any problems. That being said, it might not, however, be the best option when it comes to high-octane tournament gaming because rapidly and repeatedly smashing keys quickly isn’t that easy to do with this particular board.

The G915 Lightspeed can comfortably run any game genre thrown at it. Every time you remaster or fire of special magic abilities in Baldur’s Gate, pick legions in StarCraft: Remastered or activate skills in Overwatch, you can fully trust the keyboard to instantly and accurately parse any command you give it. For you that takes part in competitive gaming, the low-profile caps on the keys help when you need to smash important keys both quickie and repeatedly without having to experience the spring-back response you’d get from larger key switches.

The K57 XT RGB wireless gaming keyboard by Corsair has many value propositions it has on offer. In fact, it’s actually a pretty solid gaming peripheral. Not only does it provide users with all the key functions they’d ever need, but it also features flawless wireless functionality and is absolutely gorgeous as well. Sadly, though, its stiff and tasteless diaphragm key functions help bring the board back to earth and out of the clouds, as far as both typing and gaming are concerned. The price is it goes is kind of hard to fully justify considering that if you just add a few dollars you can purchase a top-tier wireless mechanical Logitech board. The G915 Lightspeed, however, does have mechanical switches and looks just as good as the Corsair. Yes, it’s not as pricey as the K57 XT, but that doesn’t mean it’s cheap either. Anyway, if you’re looking for something small and compact, then the G915 Lightspeed. If not, then your best bet between the two would be to go the Logitech route.