If you’re going to spend your hard-earned cash on a mechanical gaming keyboard, you best get one that’s totally worth every single penny you plan to drop on it. Investments should be made on things that are going to add value and keyboard devices are no exception. If you’re spending a large part of your day on a desk or workstation programming, drafting documents, sending emails, gaming etc, there’s a very high chance you want to use devices and programs that’ll help make everything easier for you, no? If that’s the case then you’re in luck because today we’ll be looking at two high-end keyboard products.

There aren’t many gaming keyboards out there that can claim to be almost perfect, however, the Corsair k70 Mk.2 can. This keyboard that uses Cherry MXs has a sophisticated and sleek overall appearance accompanied by numerous backlighting options. However, just like the way Rome wasn’t built a day, Corsair spent several years fine-tuning their creation resulting in the release of an excellent keyboard product by the name of K70 RGB Mk.2. This beautiful yet functional board is a gaming peripheral that can be used by literally anyone. Yes, it’ll require you to drop some serious dollars if you want to get your hands on it, but the Cherry MX mechanicals on it and its durable chassis make every single penny totally worth it.

The Viper V770 device is a full-size, mechanical keyboard that has RGB backlighting literally everywhere, and we say everywhere we mean even the palm rest has this RGB illumination. At first glance, you just might dismiss the Viper as juts being your standard, modern-day gaming keyboard, however, it actually has some pretty neat features that can’t be found anywhere else. Furthermore, it also comes with a rather lightweight program that’ll help you control the keyboard and all its many features.

This Corsair keyboard product has an overall appearance similar to that of its less expensive cousin the Strafe RGB Mk.2. Just like its cousin, the Corsair K70 is a full-size board that’s around 17×6 inches in size. Although, this measurement is without the wrist rest attachment. With the wrist rest on the board measures, a whopping 17×9 inches and Corsair made sure that all the space on the board’s good-looking, black-colored chassis has been used.  That being said, the keyboard itself is actually a lot tinier than your standard full-size mechanical keyboard. What’s even more impressive is that it does this whilst still ensuring it has comfortable key spacing. 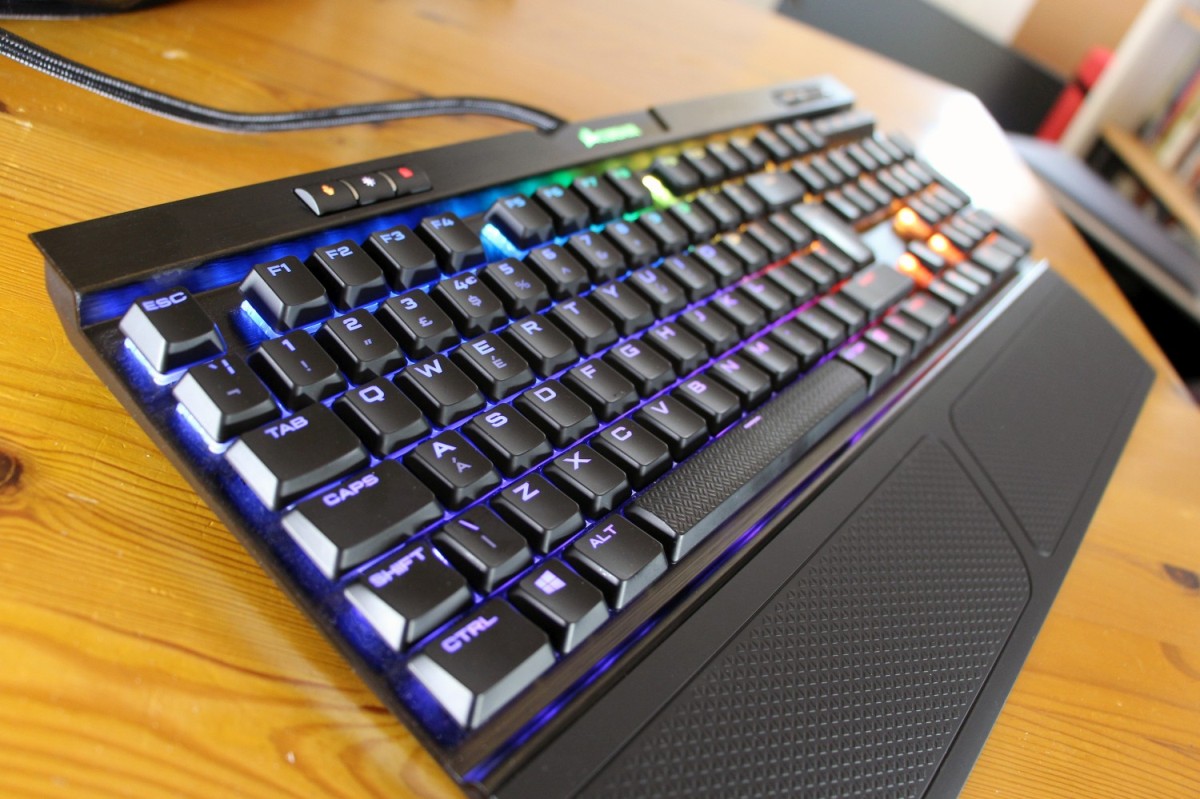 Its surface is manufactured using aluminum and this is what helps give the board that sleek look. Yes, that alone can’t be enough to justify that eye-popping price tag, but it certainly helps make it look and feel like a durable, well-built device. You can use it in the office without worrying that it doesn’t belong because it can fit such environments. Its slightly elevated keycaps give the board that much-needed flair that you’d expect from a gaming keyboard. It also has discrete media keys, extra button functions to change profiles, control brightness levels and the Game Mode feature as well as USB pass-through functionality.

The Viper has an aggressive and clean overall design style. This appearance is the result of the company trying to cram as much as they could into the board. On the sides of the keyboard, you’ll find an audio pass-through feature and a diffused light bar. On the top-right corner, instead of the Viper snakehead logo, Viper is written out in bright red. Though, the wrist rest uses the snakehead logo. Anyway, the keyboard area on top of the Viper logo is kind of slightly bent inwards and houses 2 two-toggle switches designed to be able to handle 6 functions in a tinier space instead of having all six buttons separately. Key functions have a travel distance of about 2mm and have small tactile feel to them.

The keycaps’ legends are fairly clean, however, the secondary and primary legends’ positioning is somewhat all over the place. In fact, some secondary legends are even treated as superscripts to their primary counterparts. Also, the fact that the board’s primary legends themselves take up a small part of the surface with a tiny font size and a high, central placement to ensure they’re fully illuminated by the RGB lighting underneath them doesn’t help that much either.

Corsair doesn’t joke around when it comes to the kind of key switches they’re willing to put on their keyboard products and they often opt to go the dependable and reliable Cherry MX route. Although, even though they usually put Cherry MXs on their devices, they usually provide users with limited options. However, the K70 Mk.2 is a little special in the sense that users of this device have the option of picking between five different Cherry MXs. You’re bound to get exactly what you need and what suits you when you buy a Corsair K70 Mk.2 because you have more than the standard two choices to pick from.

Many keyboard enthusiasts will dismiss a keyboard if they find that it uses Kalih switches. Most say they’re inferior to Cherry MX switches and can be very problematic sometimes. The Kalih Reds on the Viper, however, are consistent, smooth and gel well with this particular board. Linear, mechanical key switches are usually perfect for typing because they’re light and smooth. On the other hand, not having actuation responses allows for easy double-tapping making the board perfect for gaming too. In fact, this feature kind of tells you who they’re targeting. Furthermore, the keycaps on the Viper are similar to the standard caps you’ll find on most RGB mechanical keyboards; printed, thin, ABS caps. The legends are not painted on to allow for the RGB backlight to shine through.

Most top keyboard manufacturers power their products with software programs they develop and create in-house and Corsair is no exception. They have the very powerful Corsair Utility Engine which has numerous interesting features on offer. That being said, it’s still criticized a lot over its opacity. There’s still a lot that can be improved on the Utility Engine. For starters, maybe Corsair could try making the overall layout a little more intuitive than it currently is. 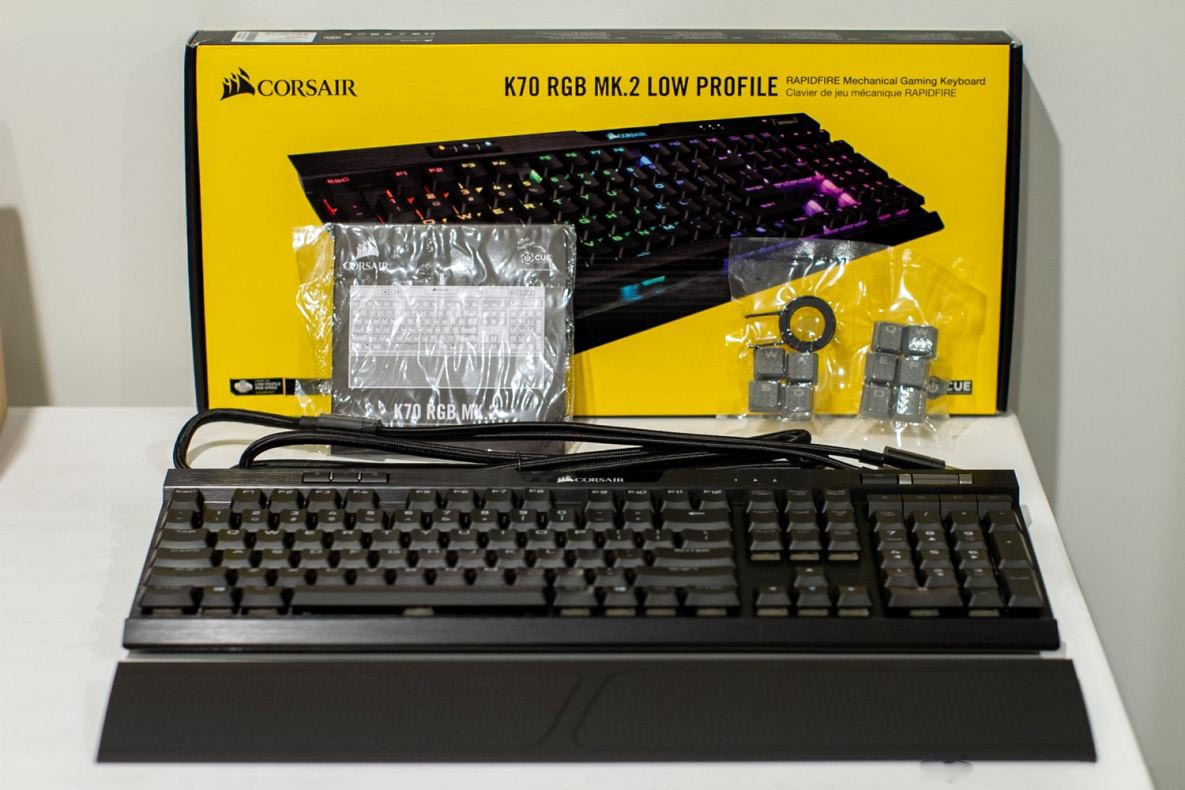 But, the good thing is that when you’ve fully understood how to use it, you’ll be able to do some amazing things with the keyboard, especially when it comes the backlighting options. Additionally, you’ll also be able to take advantage of the reprogrammable keys (which in this case is all of them), create macro key commands and come up with unique profiles for different apps, games and programs. If you want to use the keyboard somewhere or carry it along with you when traveling, you have access to 3 onboard profiles you can take advantage of.

The Utility Engine is what helps make the Corsair’s RGB backlighting so different from the rest. In fact, this software product is way more superior than a lot of the other similar products you’ll find in the market. There’s a lot it allows you to do with the board’s illumination, one of them having the ability to come up with a beautiful and unpredictable color pattern that ripples through the whole keyboard whenever you press a key. Although, it’s also equally as easy to set up regular color waves, static color themes and breathing colors. Color gradient customization is a blast as well. For one, timers can be set that will allow you to determine which colors are displayed at which time.

The driver that powers the Viper is specifically for this particular board and it’s not a unified program product for all Patriot Memory Vipers. This is something that’s rarely done and it could mean that the driver itself is specialized and lightweight. You can download the installer from the download tab feature found on the product page. The installation of this program is fairly straightforward and occupies a measly 7MB of space. In addition to this, its CPU usage is also very low which helps strengthen the notion that it’s a lightweight driver. The driver can still be used even though the keyboard isn’t connected to a PC, which means you can familiarize yourself with it on its own. 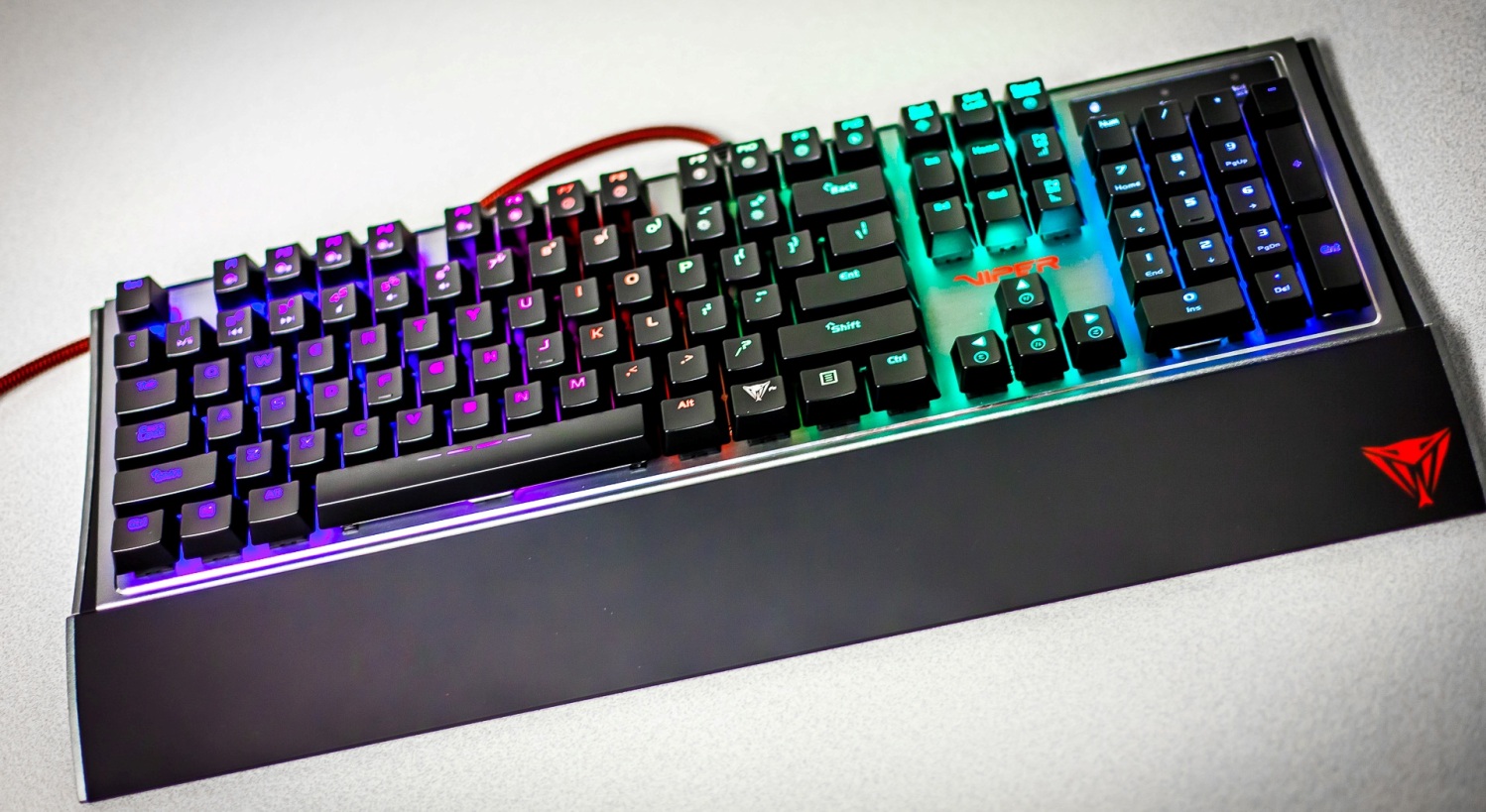 It also has an easy-to-use Macro menu as well. There’s an online manual users can access that does an incredible job of explaining what driver and keyboard functionality is all about. Create a macro function and start recording. Furthermore, not only can you delete keystrokes and add new recordings, but you can also have delays between these keystrokes as well as part of the macro function.

Overwatch, Hitman, Final Fantasy, For Honor, Age of Empires and many of the other popular game titles shouldn’t be problematic for the Corsair K70. It’s an incredibly powerful keyboard product that can manage games from almost all genres without an issue. The keys on it are fantastic. They have springy and responsive switches accompanied by comfortable keycaps. Cutting down Samurai warriors in For Honor or managing bases in StarCraft has never been easier. The media keys also make it easy for you to control audio content which is fantastic for those of you that like having music or podcasts playing in the background while you work or play. 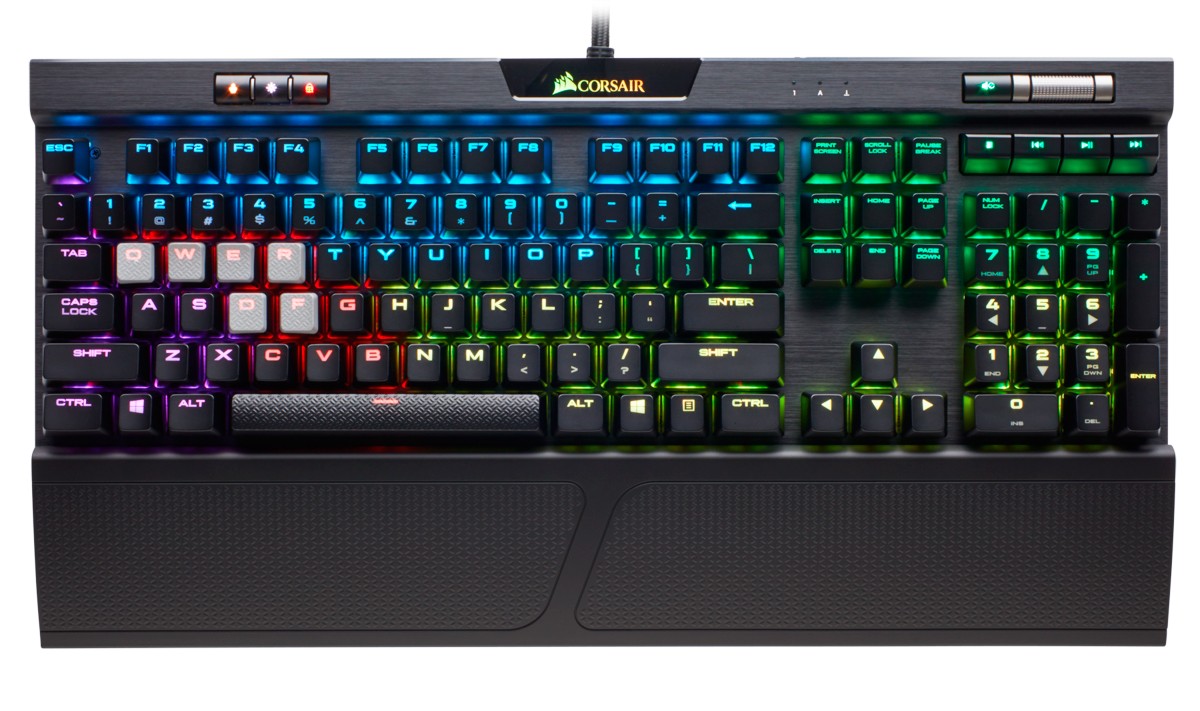 MMO PC gamers might not like the fact that they won’t have access to dedicated macro keys when they go the K7o route, but all is not really lost because the iCUE allows you to create your own macros and reprogram all the key functions on the board to your liking. These two options are what you can use to avoid having to suffer the disadvantage of lacking the extra dedicated macro keys.

The Viper supports 109-key rollover USB and the aforementioned light bars found on the side participate in all the lighting modes. In fact, a lot of these lighting profiles begin as well as end with these said light bars. You’re going to get side glows when in a dark place, however, as cool as they look they really don’t have any functional use and are mostly for the show. It lacks an on-board macro recording feature meaning the driver will constantly have to be kept in the system tray. The KalihReds, that are inspired by the Cherry MX Reds, are designed to work exactly how their Cherry MX counterparts do. With a total travel of 4mm accompanied by a similar actuation force of about 45cN, the current Kalih Red mechanical can’t be distinguished from the Cherry MXs in a blind test.

Okay, the Corsair will definitely take a toll on the pocket and its software is somewhat a little complicated in its own weird way, however, other than that, it’s practically a near-perfect modern-day keyboard. From the durable overall design style it dons to the many different switches it has on offer, the K70 Mk.2 by Corsair is both functional and gorgeous at the same time. Get the right switches and nothing can stop you.