In this article, we’re going to be looking at two headsets from the HyperX company. One has been there for quite some time now while the other was released not too long ago, however both are equally priced. The Cloud Alpha, which goes for less than 100 bucks, is what directly followed the HyperX Cloud 2 headset. It has somewhat of a similar overall design-style with several new and xciting additions. Not only does it have a detachable cable but it also has new visual touches, new pads, new earcups and new drivers. It’s incredibly comfortable to wear and it’s as functional as it is exceptional.

The HyperX Cloud 2, on the other hand, is one of the most famous gaming headsets out there. Also priced less than a hundred dollars, it offers plenty of value. Not only does it come with a carrying bag but you get an extra virtual surround-sound USB dongle as well as extra earpads. Truth, they’re both very good gaming headsets. HyperX don’t play when it comes to their gaming peripherals and picking between the two definitely won’t be easy. With that said, let’s take a closer look at both the headsets and find out which one is better. Hopefully, after you’re done reading this review you’ll know which one will best suit your needs.

The Cloud Alpha headset has been fittingly named, because it just might be one of the best gaming headsets on the already extensive HyperX lineup. This pair of headphones took everything that help make the Cloud 2 great and makes it even better. It sports an attractive and sturdy aluminum aesthetic, some subtle touches here and there to help make the device more suitable for travel and incredibly comfortable memory-foam earcups. While it has a few downsides, the HyperX Cloud Alpha headset is one of the greatest budget-friendly gaming headphones currently available on the market. 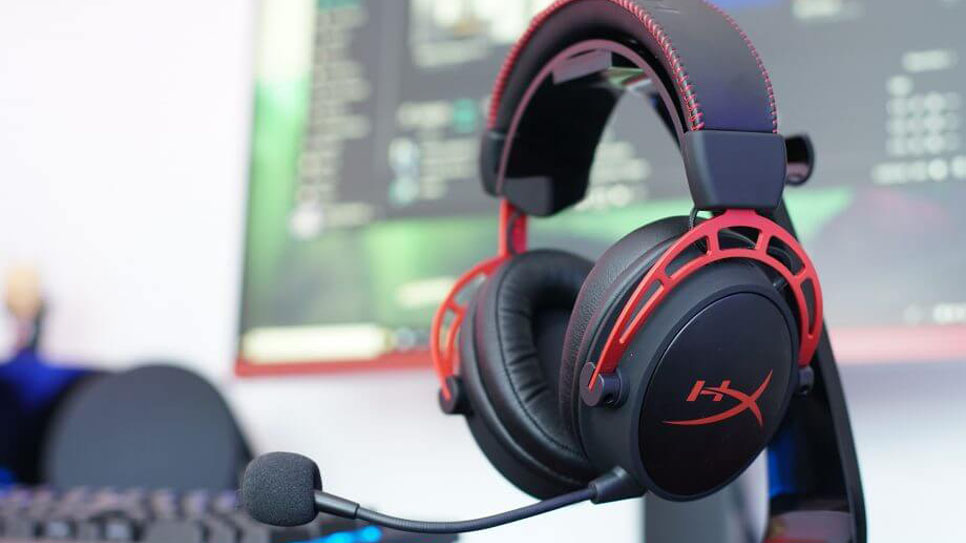 It’s one of the most premium-looking headsets on the HyperX roster, adopting the Cloud 2’s core design but sprucing things up a little. The thing that’ll hit you from the get-go is the perforated, red aluminum forks that are designed to keep the earcups in place. There’s also a brushed-metal component on the outside of the earcups. Yes, this is a headset that costs less than $100, however, you definitely can’t tell just by looking at them.

The microphone can be removed when it isn’t being used, like when you’re playing single-player games or when you’re just rocking out to your favorite tunes. Its 3.5mm cable can also be removed to allow for better storage during travel. Though, storage could’ve been a lot easier if there was a way you could lay the earcups flat, just like with the Turtle Beach 3 and SteelSeries Arctis 5 headset.

The HyperX Cloud 2 was released around four years ago and it retained the stylish and cozy overall design style its predecessor had while give you some extra immersion by adding virtual 7.1 surround-sound. What resulted is a good sounding pair of gaming headphones that has incredible comfort levels. However, the fact that it doesn’t have customization options and it has weak low ends might displease some of the hardcore audiophiles out there. 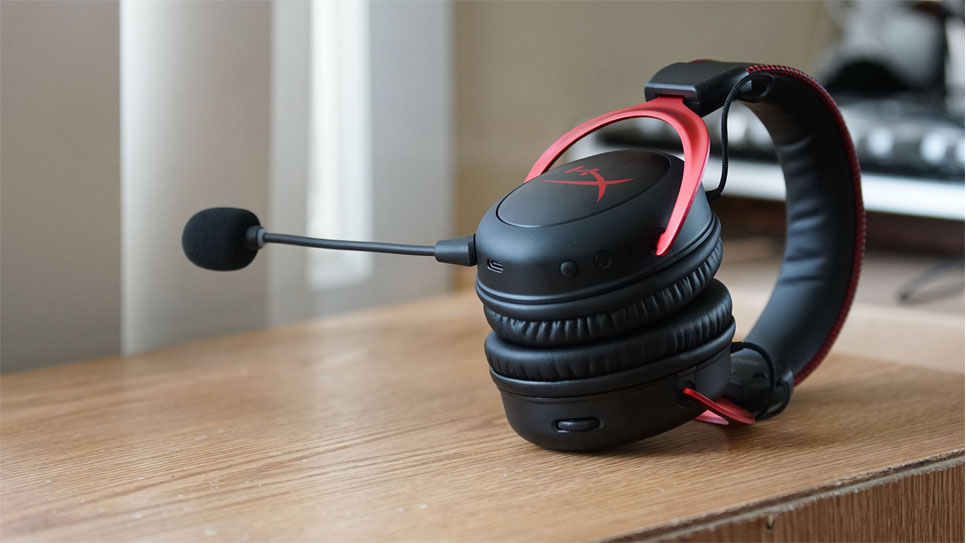 Anyway, the Cloud 2’s understated, stylish appearance helps make it a budget-friendly headset with one of the best looking overall design. The headphone’s leatherette-coated earcups and headband are attached to metal fork components on either side. This allows the earcups to adjust around one-inch up and down. The eracups themselves not only sport slick, metal-brushed outside exteriors but they can swivel back and forth as well. The top of the headset’s headband features an attractive HyperX logo.

The mic extends up to a generous six-inches or so, and features a large foam tip and highly flexible coil. The mic is completely detachable, which when removed helps transform the device into a really good-looking pair of gaming headphones. It also has a USB dongle included in the package that has controls for mic muting, 7.1 surround-sound toggling, game volume and chat volume. If you’re looking to use the headphones on amobile device, Xbox One or PlayStation 4, you can simply forget about the USB dongle and then use the headset’s 3.5mm jack to connect to the gadgets of your choice

HyperX are known for coming up with very comfortable gaming headsets, in fact, they’re world-class at doing this. Fortunately, the Cloud Alpha doesn’t disappoint in this department either. HyperX’s signature memory-foam, faux-leather earcups feel extremely cushy and soft, and its 10.5-ounce frame helps make it pleasantly light. You can wear the headphones for hours on end without having the need to take them off and breathe a bit. 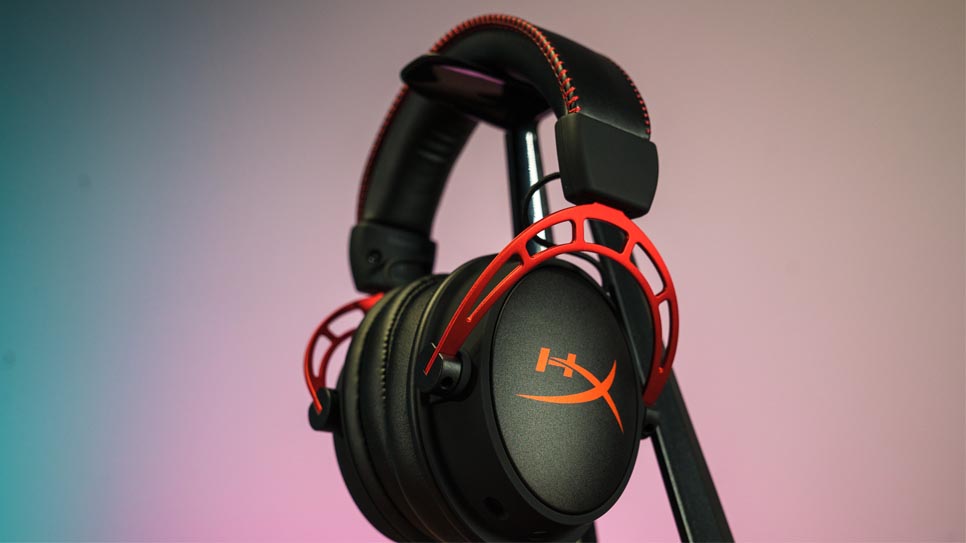 But, there are a few minor downsides though. Although the headset’s headband is easy to manually adjust and cozy, suspension headbands that conform automatically to one’s dome is kind of the in-thing right now, such as what the Cloud Revolver and the Arctis line by Steelseries have got going on. It would’ve been nice if the Cloud Alpha could’ve had the same seeing that its Cloud Revolver cousin already does. And while the Cloud Alpha’s earcups are extremely soft, they also feel a tad snugger than what you’d get on previous HyperX models, which, in turn, can end up making your ears warm occasionally.

The earcups and headband are incredibly cozy and comfortable. You can wear the headset frequently for even two days straight without getting the urge to remove all the time. The headset’s earcups fit snugly over the ears and never really feel too tight. Once you’ve gotten the right fit, at times you won’t even notice you have them on, even when you have glasses on. However, if you aren’t a fan of that leatherette feel around the years, then you can exchange the default earcup covers with the other pair of cozy, plush covers that come included in the package. The decision Kingston made to give gamers a choice between the two is a most-welcomed one, even though a lot of people will most likely just use the default leatherette covers. 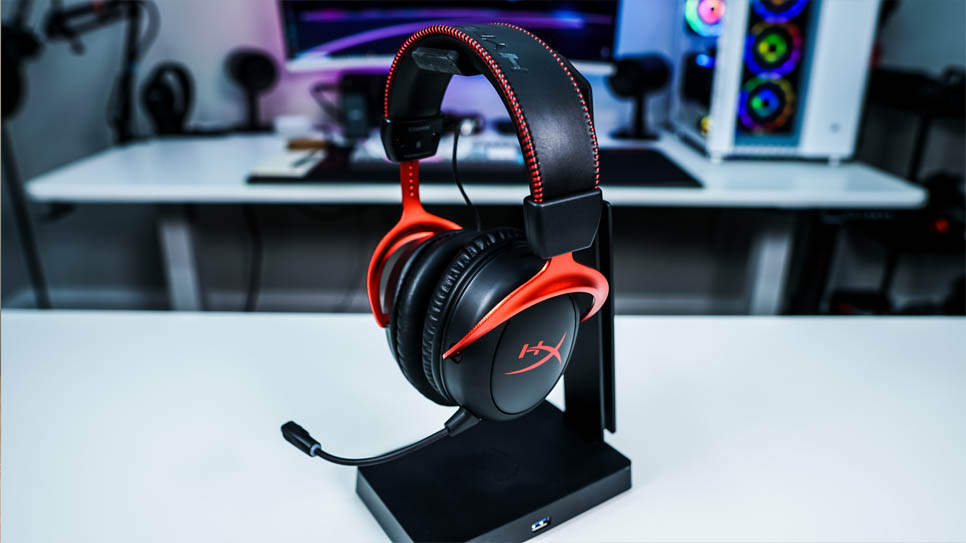 The Cloud Alpha headphones use the Dual Chamber Driver technology, developed by HyperX themselves. This technology is designed to help deliver less-distorted, clearer sound quality and to separate the bass sound from the highs and mids. This results in outstanding overall game sound that allows you to easily spot enemy combatants while also being able to enjoy crisp background sounds and big, bassy explosions. This HyperX headset makes a great companion for Injustice 2’s visceral sounds, highlighting all the guttaral punch and explosion lows as well as the piercing sword slice and crackling gunshot highs. You can even certain tiny background noises, like the subtle rustle of trees outside Arkham Asylum. 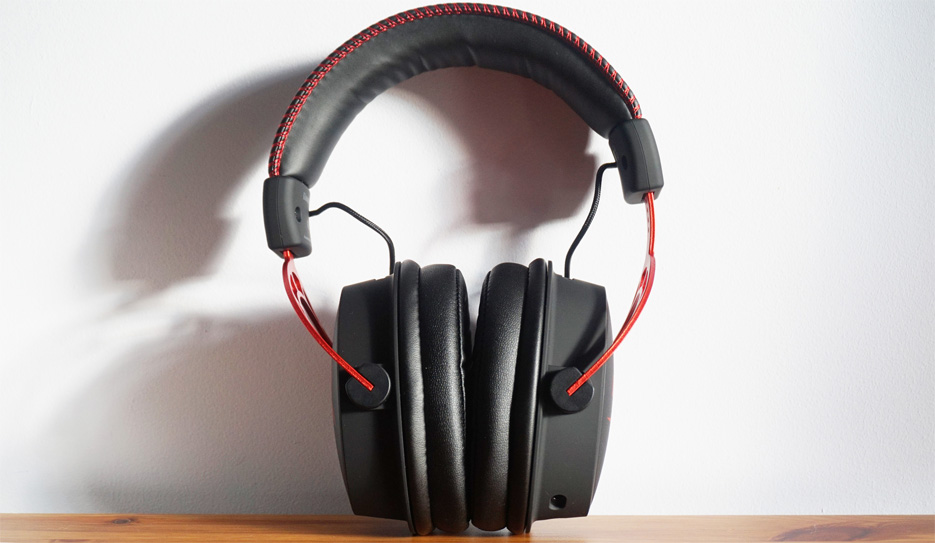 It’s also equally apt for shooter titles, where directionality is everything. The Cloud Alpha not only makes it much easier to hear enemy combatants coming in Overwatch, but it also does a fantastic job of balancing satisfyingly punchy gunplay with the sweeping orchestral soundtrack and rumbling explosions of Destiny 2. Even when you switch to Resident Evil Revelation’s more atmospheric action, you’ll have no problem locating where each undead, creepy growl is coming from. In Forza Horizon’s open-world racing, the hum of your vehicle’s engine will sound both satisfying and clear, and you can even make out slight tire noise changes when switching between sand, dirt and roads.

The sound output on the Cloud 2 is quite impressive, however, it isn’t as well-rounded as one would expect, and especially considering it’s a HyperX product. In most game titles you use them on, you’ll notice similar pros and cons. Overall, though, the Cloud 2 headset is an apt companion for most of titles out there. Every rifle burst provides a satisfying raffle and it’s easy to know where enemy gunfire is coming from in Titanfall. Although, there times in certain games where the headset doesn’t totally deliver in the low-end frequency department and, still in Titanfall, sometimes the sound of huge mechs firing missiles at each other simply didn’t have that bass-heavy boom sound most gamers are used to hearing.

The headset’s lack of low-end frequency isn’t felt too much in games like Assassin’s Creed Unity, where it’s less about frequent explosions and more about lush ambiance. You can distinguish the many conversations happening around the crowded streets of Paris, and you can also pick up a lot of the sonic details that arises when the character you’re using is stomping on wooden decks or swimming through rivers. When the time comes where you needed to start engaging enemies with your assassin’s blade, the title’s slicing noises sound really crisp and clear. 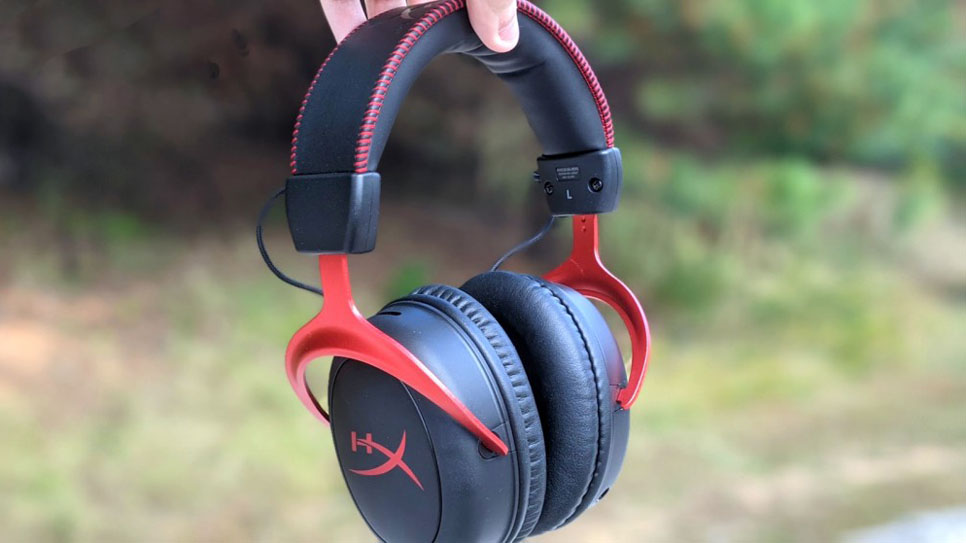 Switching on the headset’s virtual 7.1 surround-sound feature, sadly, isn’t that much of a game changer, however, it does help make a slight difference. This feature helps to highlight certain details better, like the chatty townsfolk and chirpy birds of the Assassin’s Creed world. It also does this for Titanfall’s ominous soundtrack and distant shootouts. Sadly, though, besides the surround-sound and volume controls that have been built into the headset’s USB dongle, you’ve got very little control over how it performs for each title. There’s also no software that can accompany this particular gaming peripheral, which means that you won’t be able to tweak individual parameters, like treble and bass, or even come up with your own unique sound profiles.

The HyperX Cloud Alpha has 3.5mm cable, roughly 4-feet long, that provides a lot of slack for a Nintendo Switch or console controller. It also has a handy inline remote control that can be used to mute the microphone and adjust the headphone’s volume on the fly. And unlike on the other HyperX headsets that came before it, it can be removed. This makes travelling with the headphones so much easier. It also features a PC extension cord in the package that not only gives you around 3-feet or so of slack, but also dedicated microphone and headphone jacks as well, making it perfect for almost any gaming desktop setup.

The Cloud Alpha’s mic sounds decently clear in Twitch streams and voice recordings, though for a microphone that’s touted as noise-cancelling, it picks up a lot of background fuzz. You can still use it for hosting quick streams or chatting with your pals, however, don’t expect it to be able to allow you to record high-quality podcasts or anything of the sort.

The Cloud 2’s microphone performs better than most would expect. You’ll be able to hear your friends and colleagues very well when chatting on platforms such as Skype and Zoom. There’s very little background fuzz that the other person on the other end will hear and you can make out your voice even when the mic is a little bit farther away from your face.

The Cloud Alpha generally feels way too premium for something that costs less than a hundred bucks. It provides you with supremely comfortable earcups and great sound quality within a sturdy, attractive design. While the company could’ve done a lot better in the microphone department, the headset’s overall great performance helps make it one of the best budget gaming headsets currently available today. Although, it still has some very serious competition. If you’re the type that doesn’t need RGB lighting then you shouldn’t mind that it doesn’t have this feature. If you’re looking for engrossing sound with max immersion inside a cozy and sleek overall aesthetic, then the Cloud Alpha is definetly something you should get your hands on.