Bigger isn’t always better as far as HyperX is concerned, and you can see this notion in their keyboards. They’ve used a fairly spartan mindset to approach peripheral design. Even if you break the bank and get their most exorbitant product, you’ll still end up with a piece of hardware that’s minimalist in nature. In fact, the HyperX x Ducky One 2 pushes this minimalist notion even further.

This new installment is touted as a collaboration between HyperX, who bring the switches, and Ducky, who are responsible for the basic design. They’ve managed to create something that’s both consistent and fun. So, if you’re into Ducky’s boutique keyboards and HyperX’s high-performance switches, then there’s definitely something here for you.

The Cooler Master SK621 is also a 60% mechanical keyboard. It has an overall luxe design, customizable controls and multi-colored backlighting effects. The SK621 focuses on offering creative professionals and gamers the functionality they require without having to sacrifice the artistry they want and crave. For most people, why they primarily go for mechanical keyboards is to try and avoid the cramped, flat keys you’ll usually find on an average PC or laptop. This is why these keyboards make particularly strange propositions.

With that said, the primary point of a 60-percent keyboard is often portability, and that’s what both the Cooler Master and One 2 Mini seem to be concentrating on. In that department, they’ve both done exceptionally well.

The One 2 Mini measures in at 11.9×4.3×1.6 inches and is a rather minuscule gaming keyboard. Being that it’s a 60% nature keyboard, it helps free up a lot of desk space which, in turn, will give you extra space for your gaming mouse to shine. Those that hold ergonomics in high regard may want to strongly consider using 60% keyboards such as this one. It allows users to keep their hands closer to their bodies allowing them to exert less effort when working because the keyboard has a shorter distance from one end to the other.

The One 2 Mini’s small build makes it very portable and its detachable USB-C makes it easy to take on the go. Also, its USB Type-A gold-plated connector that’s used to plug into the PC feels solid and firm. Despite having so little room to work with, Ducky and HyperX still managed to come up with a very fun and exciting overall design. The keycaps are manufactured using double-shot injection (which means 2 pieces of plastic material were stuck together) making them very durable.

The Cooler Master SK621 measures in at 11.5x4x1.1 inches and weighs about one pound. It’s light and small enough to carry comfortably in a backpack or laptop bag. Unfortunately, though, this portability doesn’t come without a trade-off. In order to achieve this compact 60% keyboard layout, the designers had to do away with the number pad, as well as several other landmarks you’d find on a full-size keyboard. A lot of the dedicated functions the likes of Page Up/Down and Home, and some multimedia playback controls, have been placed under alphanumeric keys. Others have been relocated to new positions and have been reduced. 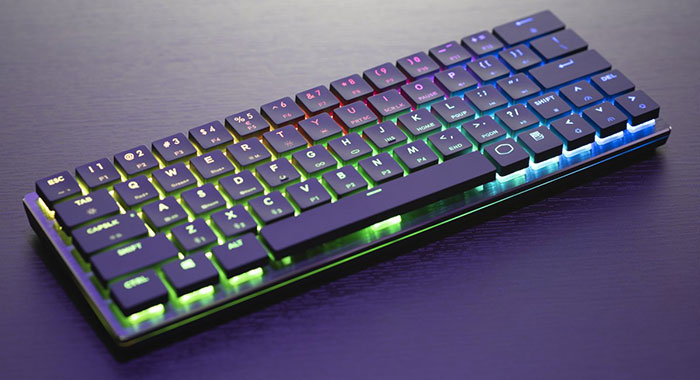 Cooler Master, however, has really concentrated a lot on the keyboard’s overall aesthetics. The keyboard has gold trims around its chassis, RGB backlighting, floating keycaps and an aluminum top-plate. The attention to detail is also seen in the accessories. It features wired connectivity, a velvet tote sleeve and a USB-C cord for charging. But, despite the emphasis on eye-catching aesthetics, the SK621 keyboard still looks like it has been built to last and feels both stable and sturdy too.

The One 2 Mini uses HyperX’s Red switches and, just like the Cherry MX Red switches, they also have a linear feel to them. There’s no bump or tactile sensation when the keys are pressed. The switches actuate at 1.8mm and have a total travel of 3.8mm. HyperX key switches have an 80million keystroke lifespan, which is a little less than what the Cherry MX Red switches have to offer. Two stabilizing cross stems are used to frame the switches, and the spacebar, shift and enter keys all have this as well. The spacebar has a much firmer feel than all the rest of the other keys but this is something you’ll notice more when gaming rather than when typing.

In real-life use, when editing long articles and the like, the 60% design limitations might start getting to you at some point. Why? Well for starters, having to live without arrow keys might help slow down productivity. Yes, you can hold Fn and press L, K, J or I to activate them but this will slow down your typing one way or another. This is another place where the 60% feature falls short.

With the SK621 keyboard, like many other compact keyboards, typing on it will take a little getting used to as well. The switches themselves feel fantastic, with a springy rebound, satisfying clicks when stroked till the bottom and decent travel. They provide that audio and tactile feedback most mechanical keyboard lovers adore. However, key discovery on the SK621 requires a little patience and time because of certain keyboard reconfigurations.

The SK621’s chiclet-style keys and its linear Red switches aren’t for everyone. These flat switches make it a little more difficult to orient fingers by feel, and its 3.2mm key travel and 1.2mm actuation point, while luxurious, is much shallower than what you’d find on other full-sized mechanical keyboards. Combined with the keyboard’s already compact nature, you may end up finding it a bit tight when typing and your fingers might start getting tired after long writing periods.

You’re probably going to type slower on such keyboards, and with many more errors at that. However, that’s almost the norm as far as most 60% keyboards are concerned. It’s harder to type on a keyboard that has a relatively small surface area.

A 60% keyboard will, of course, give your gaming mouse a lot more room to work with, and having more deskspace is something most gamers will really appreciate. MOBA and FPS players, specifically, will greatly appreciate this form factor, however, newcomers might have to slightly adjust to that baby One 2 Mini keyboard feel. Furthermore, if you’re one that uses arrow keys when gaming, then you might have to do some small remapping as well. Although, the HyperX Red switches are very good for repeated hitting because the straight down movements call for little effort to actuate. 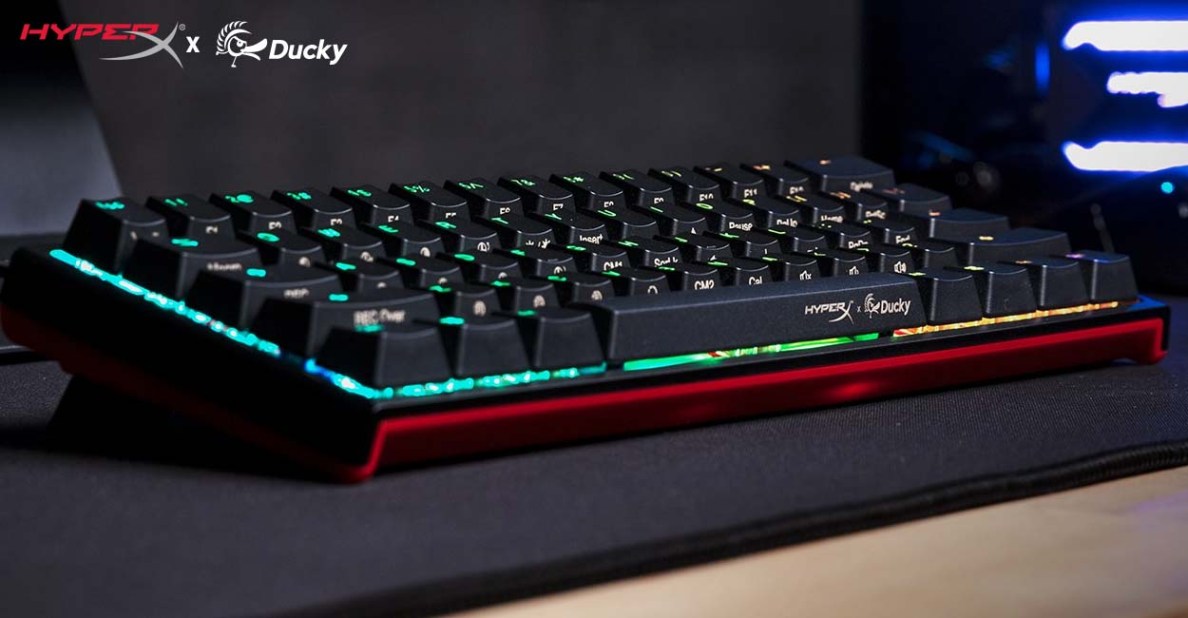 There’s a very good reason why Red switches are considered advantageous, as far as fast input is concerned. Those that game competitively will appreciate HyperX’s Reds that boast of less travel than their Cherry MX Reds counterparts, which is a difference of 1.8/3.8mm to 2/4mm.

The most noticeable thing about the keys on the Cooler Master keyboard, when it comes to gaming, is that they’re very quiet. In fact, they’re way quieter than the Red switches found on the One 2 Mini. It has a solid build quality in both how it performs as well as how it looks, and if you like chiclet keys then this is definitely the keyboard for you. The keycaps aren’t completely flat and have these subtle contours that many fingertips will find comforting. Sadly, though, they’re not optimized for gaming but rather for typing.

The One 2 Mini is short on a Numpad as it is on software. Instead, the keyboard is what controls all its features. The writings on the keycaps dictate most of the functions, however, others may require more complicated activation. What this means is that you’ll have to keep the manual close to you when using this keyboard because you’ll probably not be able to easily memorize the more advanced features it has. The One 2 Mini also has 6-macro profiles that use Ducky Macro 2.0 technology, and the Caps Lock and Fn button features can’t be reprogramed as well. But, you do get 3 layers and the instructions in the manual are good enough to help newbies or novices set up macros. 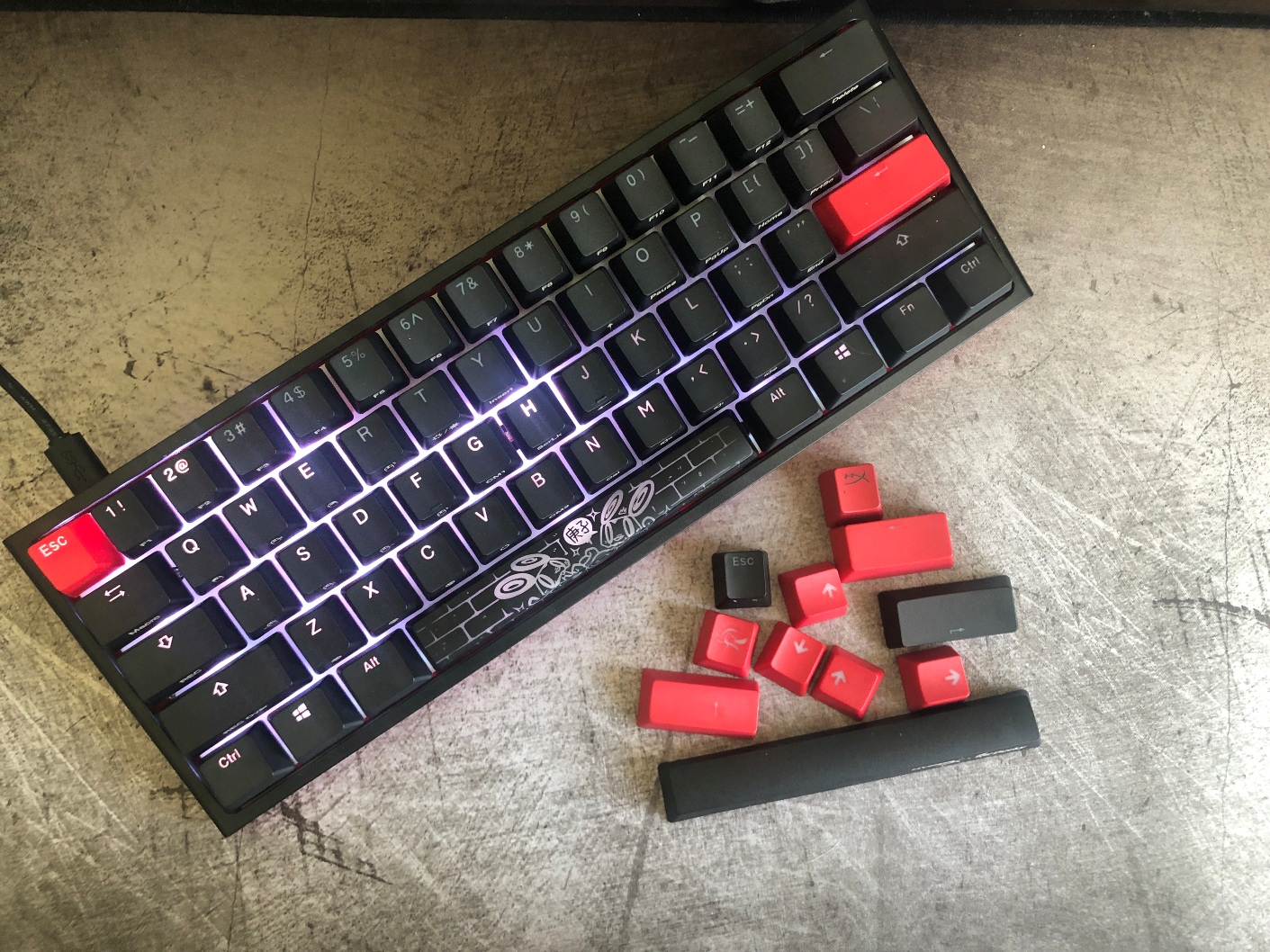 Oh, and you get 2 RGB profiles that have per-key customization capabilities in addition to preloaded RGB effects. Each LED’s blue, green and red levels can be adjusted via a combination of keys. Numerous controls are brought forth by the Fn layer, including the ability to left and right click, scroll or move the cursor in all 4-directions. However, this might just be something that only competitive gamers get to really appreciate. You also have the option of tweaking debounce time from the 10ms default to 5ms, 15ms or 25ms.

Cooler Master has some solid keyboard software that you might want to consider installing on the SK621, but you’ll have to get the right version first. You can actually modify the RGB lighting and most of the other keyboard settings via keyboard combos, which have been dubbed “On-The-Fly Shortcuts” by Cool Master. If you prefer using software interfaces for a detailed Macros or precise color setups, then the Portal software by Cool Master should do the trick. Just remember that even though the SK621 is a relatively new keyboard, you still need to use the V1.01 software and not the V1.5.7. Cool Master will show you what supports what on their downloads page so this shouldn’t worry you too much. 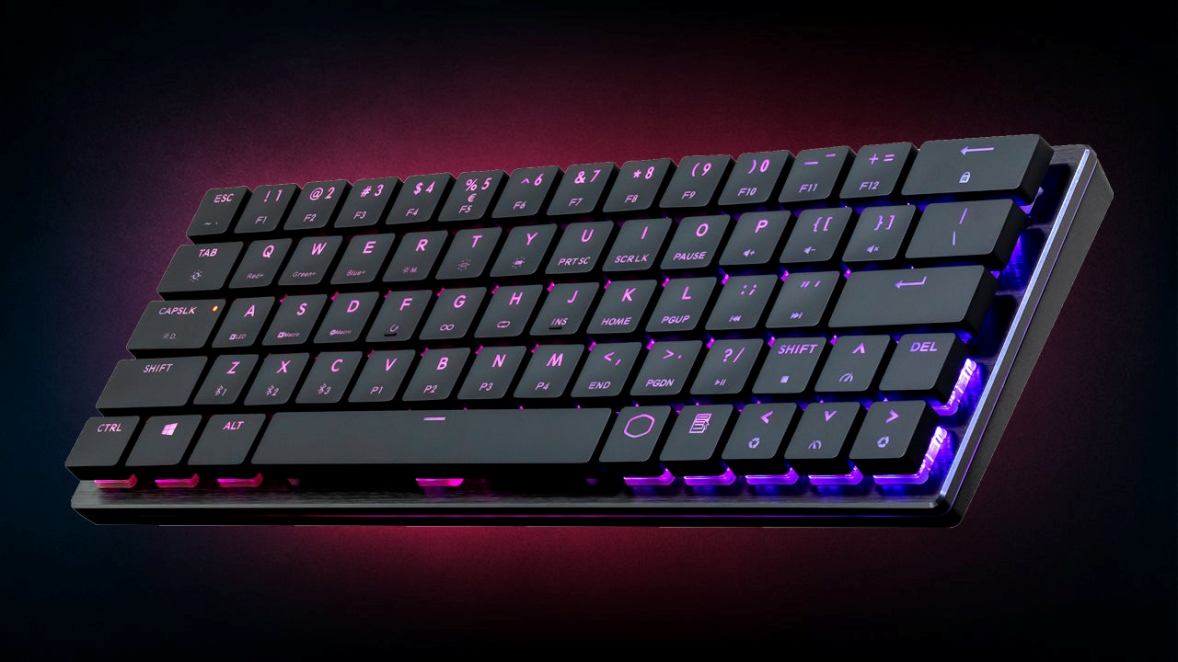 The SK621’s on-keyboard control options are substantial, to say the least, and this quite a nice feature considering the keyboard is designed mainly with portability in mind. Furthermore, Cool Master goes one better by actually labelling their keys for shortcuts, so you don’t have to memorize all of them. Unlike with the One 2 Mini, this is something you won’t have to worry about with the SK621 keyboard. You won’t have to keep the manual close by with the Cool Master SK621 keyboard.

If you’re in search of a top-quality 60% mechanical keyboard, then not many come better than the One 2 Mini nor the Cool Master SK621. They’re both excellent choices with well-textured, desirable keycaps and plenty of RGB lighting for such small devices. The One 2 Mini, in particular, is ideal for those of you that like red and black aesthetics. If you want a keyboard that stands out then the One 2 Mini is definitely right for you. Furthermore, its fast and linear actuation also makes it a perfect option for the competitive gamer as well.

With that said, the Cool Master keyboard also has a very interesting overall aesthetic and does stand out in its own right too. If Chiclet-style keys are your thing then look no further. Both options aren’t the best when it comes to typing, but the SK621 is slightly better when it comes to this.

Unfortunately, we have to pick the better one between the two. So, the winner goes to the HyperX x Ducky One 2 Mini. If you have to choose between the two, then you might want to strongly consider picking this one.