Mechanical keyboards are a game-changer and they’ve managed to single-handedly revolutionize the eSports world. Quite frankly, they’re incredibly innovative keyboard products that have been part and parcel of the computer hardware realm for a while now. In fact, these days, many hardcore PC gamers won’t know how to operate effectively without them. Anyway, in this article, we’re going to be taking a close look at some of the best mechanical gaming keyboards currently on the market, which are’ the HyperX Ducky One2Mini and the Logitech G Pro keyboards.

If you’re of the opinion that a tenkeyless keyboard is a more streamlined device, in turn, making it ideal for gaming, then you should pay close attention to what the One 2 Min has to offer. Why? Because this isn’t your average, regular-old mini mechanical keyboard. The One 2 Mini is a 61-key mechanical gaming keyboard that hasn’t got some nine productivity keys on it as well. Some of these productivity keys include Prn Screen, Delete and Home buttons plus the navigation keys. Tenkeyless keyboards are a big hit on the worldwide gaming scene and the HyperX x Ducky isn’t one that looks like it’s going to disappoint as well. It’s positively compact profile, mechanical switches and extensive customization settings is basically everything a true gamer would need.

Logitech’s G Pro X is one of those compact and elegant mechanical boards that have creative central concepts accompanied by an overall colorful all-round theme. This keyboard product provides users with extensive customization properties even allowing them to replace all the keys if they so wish. True, you may have to reach deep into your pockets if you want to get this device, however, it’s well worth it considering you’ll be getting something that will offer you performances that are actually way above-average.

The Ducky One2Mini is a beautiful mini mechanical keyboard product that measures 12×4 inches. It only has sixty-one keys and is arguably the smallest mechanical gaming board you’ll find out there. It’ll seamlessly and comfortably fit almost anywhere you decide to put it. In fact, you can buy the HyperX x Ducky and still have a lot of space leftover on your workstation or desk to add another standard keyboard for productivity purposes. In fact, you may even actually need another regular-size keyboard to supplement your HyperX x Ducky. This board is the by-product of a Ducky and HperX collaboration. Haven’t heard of Ducky before? That’s understandable, Anyway, it’s a Taiwanese manufacturer that is known for its good-looking minimalist gaming keyboards that use of different types of mechanical key switches. 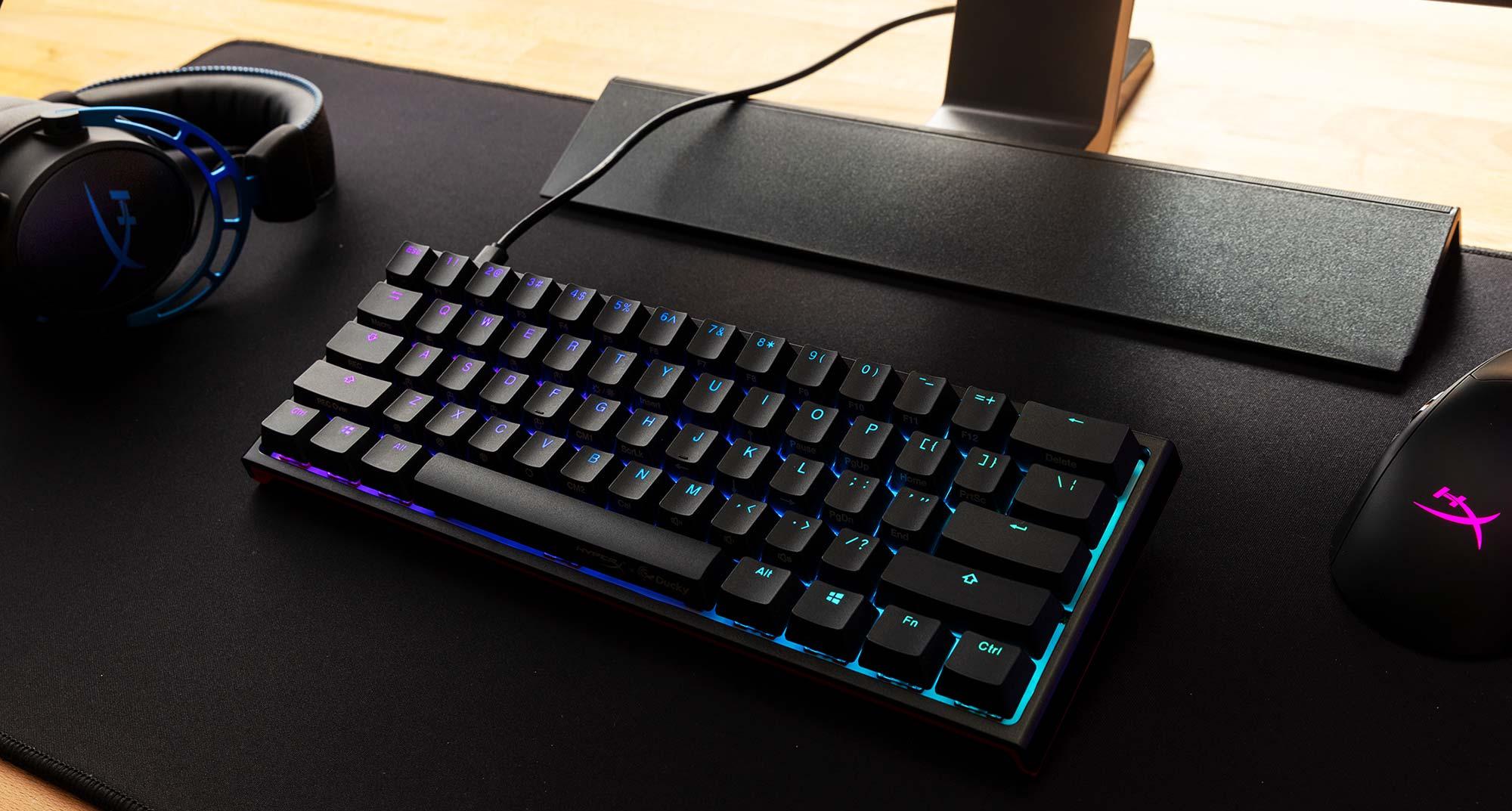 Like a lot of the other products on the Ducky roster, the One2Mini gaming board is sleek and elegant yet understated and simple with swappable keycaps. It’s not the flashiest keyboard out there, however, it’s certainly not the dullest there is as well. The keyboard has a plastic-based, red-and-black colored chassis that comes with different RGB illumination zones which help give the board a striking appearance that’s, at the same time, not too obnoxious. Anyway, if you’ve never used a tenkeyless or mini keyboard before, you should know what you’ll be getting into with a purchase like this. Normal tenkeyless boards will often exclude the numpad column and discrete media key features. However, the Ducky also excludes all the Fn Keys located at the top. But, it doesn’t stop there. You also won’t have the 9 key features usually adjacent to the function keys, which are Prn Screen, Home, Delete and navigation key features.

The Logitech g Pro is a tenkeyless mechanical board that has got a black-colored chassis alongside full RGB lighting. You won’t find any extra keys on this device as well and it only has 2 key features located right at the top which you can use to control the Game Mode feature and brightness levels. It has a detachable USB cable which helps make it even more portable. This a big plus for gamers that are constantly on the go with their keyboards. Logitech had no keyboard products on their roster that allowed to completely switch out all key functions before the G Pro X. Allowing users to do this means that they can get the switches that best suit their needs. 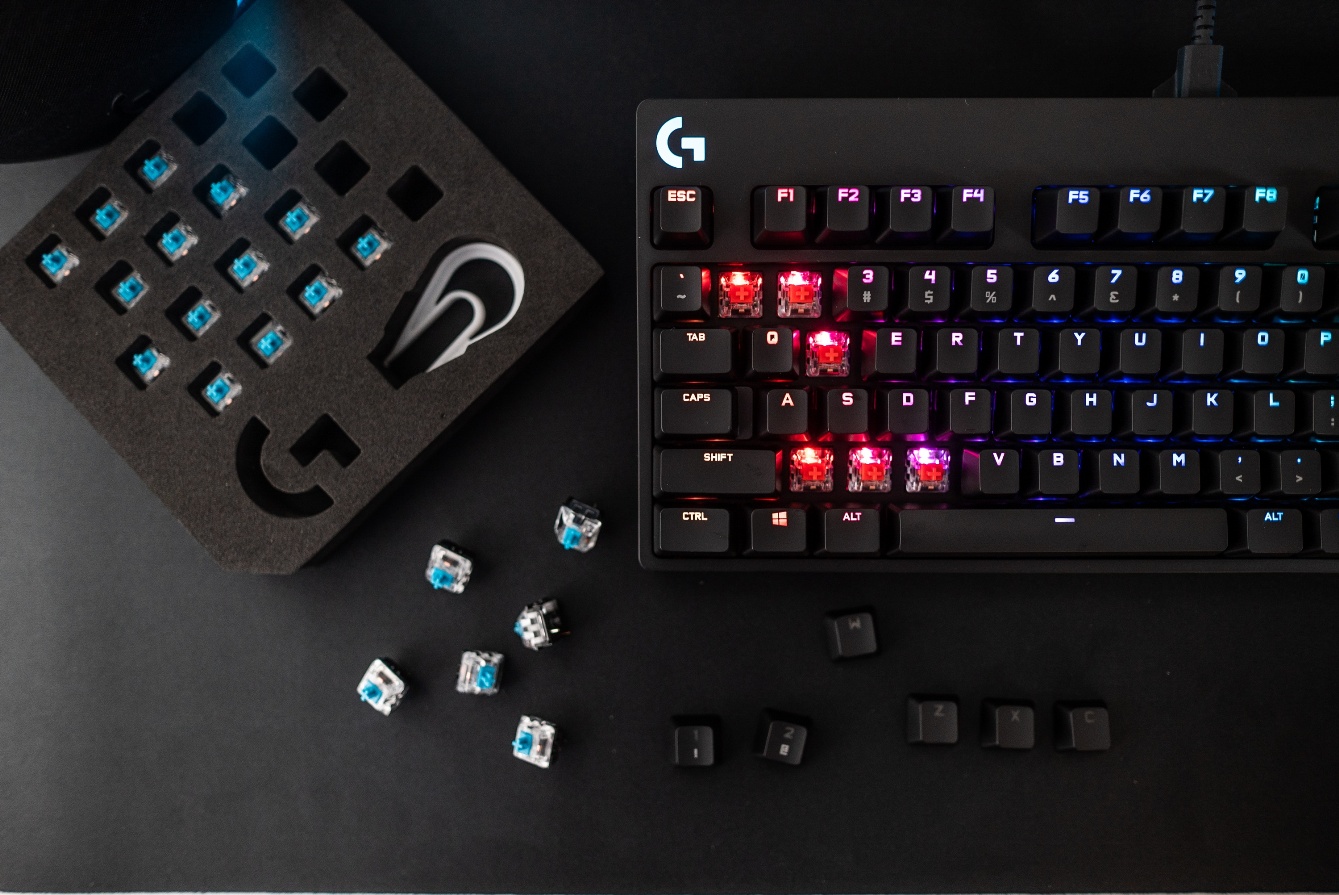 If you’ve never purchased a keyboard product that has been manufactured by Logitech and the G Pro X is the first one you’re considering, then you’re in luck. Why? Because this option lets you choose between three types of GX mechanical switches. You can get one that either uses tactile, noisy GX Blue switches, quiet and tactile GX Brown switches or quiet and linear GX Red switches. Though there’s still more. You can also buy these GX switches separately, each set containing 90 switches and priced at around $90 a piece.

The One2Mini keyboard has HyperX Red mechanical key switches. These switches are quiet, linear and feel very comfortable under the fingers. However, even though they were largely inspired by Cherry MX Red key switches they still have a long way to go before they can be considered as good as their German-based counterparts. That being said, they still provide great typing and gaming performances. Okay, truth is, the typing experiences it provides are still kind of below-average and really can’t be compared to what you’re going to find with the Logitech G Pro keyboard.

Like we mentioned earlier, going the G Pro route means that you have three different GX switches you can choose between. But, there’s more. Logitech gives its customers the option of buying additional key switches separately. The offer sets of ninety key switches each going for around ninety dollars or so. You can use them when you want to customize your board even further. These GX switches which the company manufactured in-house themselves feel a little stiffer than what you’d get from Cherry MX Reds, which they got their inspiration from. However, that’s not to say these switches are uncomfortable or anything like that. Although, you won’t get used to them right away.

The Ducky One 2 Mini has no software that drives, and this could be a good or a bad thing depending on how you look at it. Most users won’t like using a complicated piece of software and things can get even more frustrating when that complicated software product is powering a keyboard that doesn’t have any extra key functions. Now, seeing as how the Ducky does everything it can not to have extra keys, imagine how hard things would be if they included a complicated software product into the mix.

Furthermore, to compensate for the lack of a software program and extra keys, the Ducky integrated in-built controls which, honestly, still does more harm than good. Anyway, you can create macro settings, change color profiles and switch through presets by manipulating certain key functions. Theoretically, all this sounds fine and dandy, but in practice, achieving any one of the things we just mentioned can sometimes prove incredibly difficult.

Programming macro functions is tedious, cumbersome and hard to optimize when there’s no visual interface to help guide you. Anyway, in as much as there so many important function keys that have been excluded from the board, they aren’t really all gone. They are there as keyboard shortcuts and users can access them by pressing Alt and certain Fn Keys at the same time.

The eSports community is the audience being targeted by Logitech when it comes to the G Pro X keyboard. This keyboard product contains a removable USB feature for better portability. Also, the fact that Logitech provides you with the option of purchasing separate GX key switches if you don’t get the keyboard you’re looking for, don’t sweat it. You can get what’s currently available at the moment, say a G Pro with GX Blues, and if you wanted one that was using Reds, you can buy GX Blues (if those are what you wanted) separately at around ninety bucks and then switch them out yourself. Pretty awesome, no? 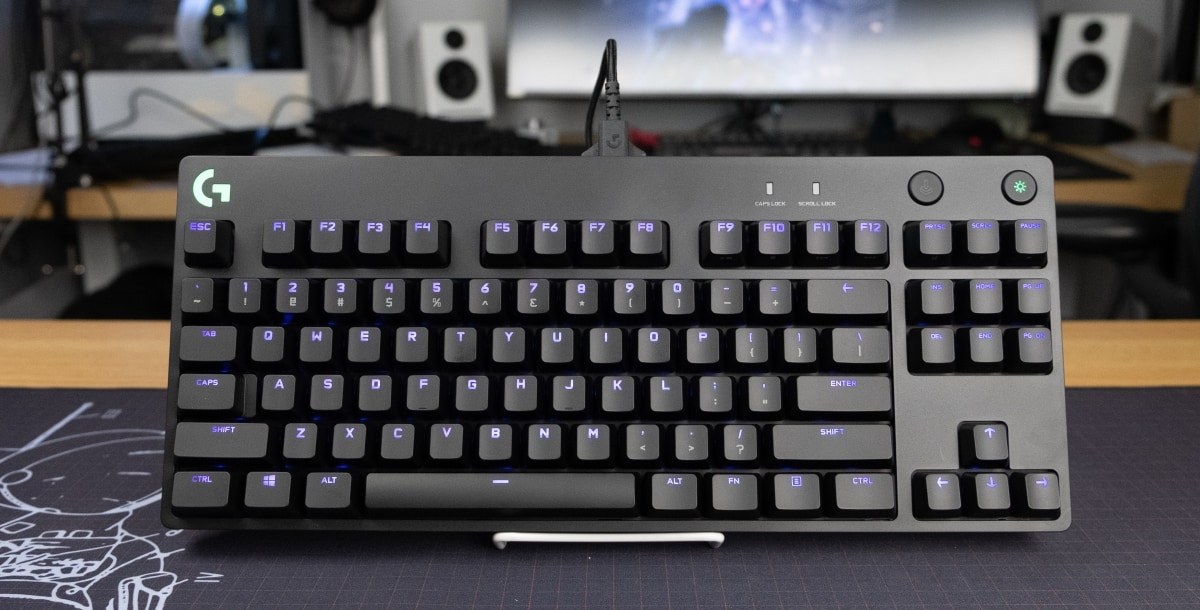 Logitech has a software product they’ve created in-house called the G Hub. This is what it uses to power its G Pro X mechanical board. This is a software product that’s not in any way complicated and it’s pretty easy-to-use and straightforward. It’s what you’ll have to use when you want to create profile presets for certain individual apps, programs and games. Alternate function commands can be programmed and RGB backlighting profiles can be changed using the G Hub as well. One thing that’s kind of a big bummer, though, is that you can only reprogram a few keys on the board and not all of them.

Most people that want the Ducky One2Mini often want it because they heard it provides users with excellent gaming performances, and they’re not wrong to do so. This keyboard won’t give you any issues if you’re using it for gaming purposes. The fact that it has all the movement and action keys means that you won’t have a problem running and hacking down Samurai warriors with your Viking ax in For Honor, climbing dangerous ravines in Tomb Raider and commanding large armies in Age of Empires. The HyperX Red mechanicals parse commands instantly and they’re very responsive too.

Ducky’s biggest downside is it lacks Fn Keys which can sometimes be extremely useful in certain game titles. Furthermore, even though you have keyboard shortcuts that can remedy this, they require the use of both hands to initiate and this is very hard to do when playing games that require fast reflexes. In games where speed is a factor, making use of these shortcuts is almost impossible. That being said, we’re not classifying this as a total deal-breaker because not all games will require you to have access to Fn keys.

You can expect fantastic gaming performances when you go the Logitech G Pro X route. Not only are the GX mechanicals very responsive but they’re also incredibly fast too. Whether you’re going to be using it to chop down Knights with your Samurai sword in For Honor or whether you’ll be taking down your targets in Hitman with it, the switches won’t disappoint. Given Logitech gives users a choice of 3 different GX mechanical switches, gamers and typists alike should not have a problem getting their hands on exactly what they need or are looking for. Although truth is, this device can’t really be considered a productivity keyboard device, especially when mundane, day-to-day typing tasks that require a Numpad and such are involved. 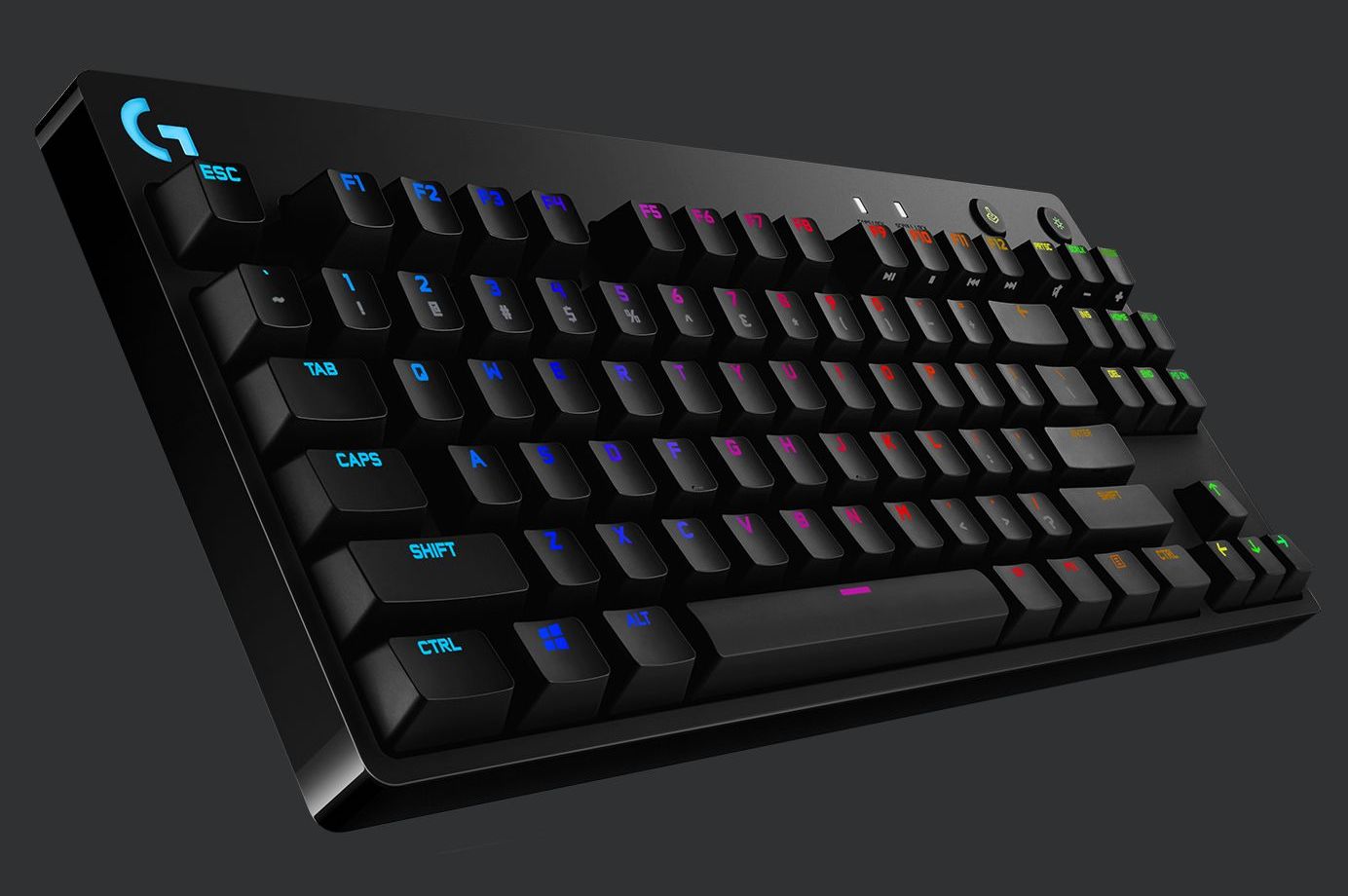 If you’re a fan of the tenkeyless mechanical keyboard and are looking for something that can offer slightly more than that, then you should really consider putting a majority of your focus on the Ducky One2Mini device. It may not be an ideal productivity option but it’s perfect for gaming. The Logitech G Pro X has more or less the same features as the Ducky does but offers slightly better gaming performances. We really can’t say which is better between the two so we’ll leave it as a tie.