Most gamers these days are of the notion that tenkeyless gaming peripherals that don’t have a numpad, are more streamlined and better gaming tools, especially for the players that travel a lot.

Now, for those people that feel even tenkeyless versions are a bit too big as well, you’ve got the option of the Ducky One2 Mini. This is a 61-key keyboard that also excludes arrow keys as well as the 9 productivity button features, which include Home, Delete, Print Screen and so on. The RazerBlackwidow Lite, on the other hand, is a tenkeyless keyboard that focuses on splitting the difference between being a productivity peripheral and a gaming accessory. While it still has that hall hallmark Razer functionality and design, it doesn’t have the things that make a gaming keyboard stick out in an office setup, such as extra macro keys or RGB lighting.

Enthusiasts have now, for years, been talking about how awesome mini keyboards are, and both the two options in this article have everything most gamers would want: a positively small profile, streamlined customization options, RGB lighting and mechanical keys. There are the same in many ways, however, let’s take a look at the few differences they have.

Okay, giving credit where it’s due, the One2 mini is an absolutely gorgeous looking gaming keyboard. This sixty-one key peripheral that measures in at 11.9×4.3 inches is one of the smallest mechanical keyboards you’re bound to find out there and it can fit comfortably inside any bag or on top of any desk. As its name suggests, the Ducky One2 Mini device is a collaboration between Ducky, the boutique keyboard provider, and HyperX, the famous gaming manufacturers. The One2Mini is similar to other Ducky products in the sense that it’s understated but still elegant. Although, it does come with an array of swappable keys as well if you want something a little more flashy.

The One2 Mini has a red and black chassis made of plastic material that’s striking but not too obnoxious. It also has several different RGB lighting zones. Oh, and for those of you that might not be familiar with mini gaming keyboards, remember that it doesn’t have a numpad region, which means no space for discrete media key functions. However, the One2 Mini goes even a step further and lacks the function keys on the top row and the 9 adjacent buttons. That’ll take a lot of getting used if you’ve never even handled a tenkeyless device before. With that said, this device isn’t the only one to have gotten rid of these keys, so there lack thereof isn’t such a big con.

If you know about the RazerBlackwidow, which you should by now, the Blackwidow Lite retains a lot of the Blackwidow’s most recognizable features. It has the elevated keycaps, plain black chassis and Razer’s very own mechanical switches. Although, this tenkeyless variant also eliminates some of the interesting things its full-size counterpart has. For starters, you won’t be getting a numpad, of course. Okay, this might not sound so important, however, Razer wants the Lite to be considered a productivity device and not just a gaming accessory. Sadly, though, numpads are incredibly useful in the productivity department.

The BlackwidowLite’s compact size also means the lack of discrete media key buttons, which happen to be highly useful for those office users that need to have access to their music being one button away. It’s a little strange why Razer insisted it be a smaller profile yet they wanted it to be a productivity device as well, yet we all know that tenkeyless games are often largely designed for gaming purposes. Lastly, the Lite also doesn’t have a wrist rest, which is there in the Blackwidow Elite package. This is another thing that doesn’t help strengthen their productivity case because most touch typists need a place to rest their wrists.

The HyperX Reds is what you’ll find in the One2 Mini. These are quiet, linear switches that are quite okay overall, however, they don’t match the Reds from Cherry MX, from whom they got their inspiration from. Nonetheless, they’re good for both everyday typing and gaming. Yes, it might not provide a great deal of comfort when typing, especially because it feels a little cramped and it’s relatively easy to accidentally press adjacent keys, but you’ll type a lot faster on this device compared to how you would on a traditional, everyday keyboard.

The Blackwidow Lite keyboard uses Razer’s orange switches, which happen to be both relatively quiet and tactile, much like their Cherry MX Brown counterparts. A recent redesign helped make them a bit more responsive and less stiff than they were before. Even though they might not be as good as Cherry switches, they’re still very durable, comfortable switches that are way better than traditional membrane models. The most interesting thing about the Lites’s keys is that not only do they come with keycap pullers, but they also come with bags full of O-rings as well. Oh, and O-rings are these tiny rubber bands that help make the spring back on keycaps faster and decrease volume.

One of the things that many people love about the One2 Mini gaming keyboard is that it doesn’t have any software whatsoever. How now, right? Well, lacking any kind of software is generally way better than having to deal with complicated software. This is even more particularly true when the said device lacks any extra keys. So, you can imagine how catastrophic it could have been to have complex software in something that’s going out of its not to have extra keys.

Sadly, though, the One2 Mini keyboard went wrong when they included in-built controls to compensate for lack of software and the like. The manipulation of a complicated series of buttons will allow you to switch profiles, change color patterns, record macros and even give you the ability to play light-based gaming titles. In theory, all this might sound really good, however, getting these things done can prove extremely difficult. There are about ten different backlighting settings, with varying individual color levels as you go. Furthermore, fine-tuning the keyboard’s RGB lighting is quite complicated, and it even resets when the device is shutdown.

With that said, the HyperX Ducky has plenty of functionality for those willing to take the time and really understand how to use it. 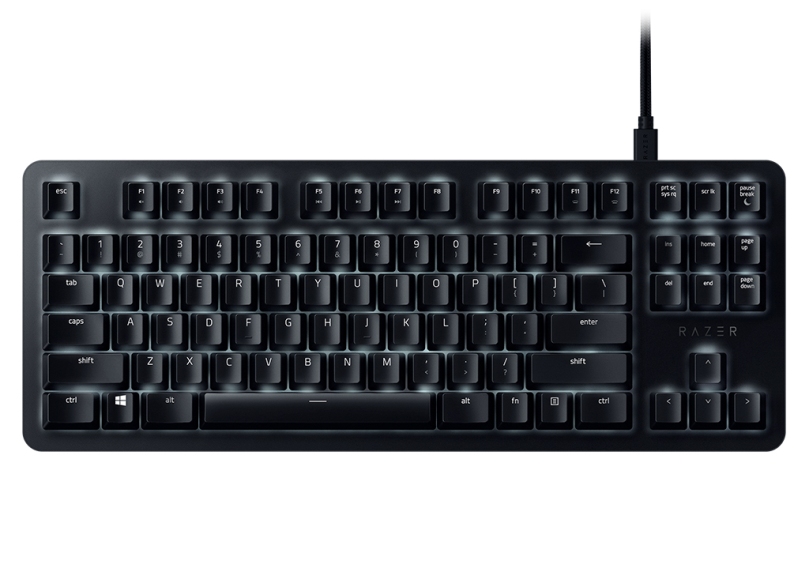 Like most other modern-day Razer gaming keyboards, the Blackwidow Lite is powered by Razer’s Synapse software. Okay, this software has many good and bad reviews and it’s still very hard to come up with sweeping judgments concerning it. With that said, when it does work it works extremely well, and it’s not problematic on the Lite keyboard. The Synapse software can be used to adjust backlighting settings, setting up individual profiles and even the reprogramming of all the keyboard’s keys if that’s something you’d like to do. Although, you’ll not need the Synapse that much, however, it’s good to know you have that option at your disposal, especially since this reprogramming of keys can help you forget that you’re using a tenkeyless design keyboard.

Many people that are specifically looking for a One2 Mini gaming keyboard are most likely doing so because of its gaming capabilities. When it comes to the gaming front, this keyboard has almost no issues. Since the action and movement keys are all present, you’ll have a fantastic time running and taking down enemies in Doom Eternal, completing quests and missions in Final Fantasy XIV, scaling ravines with Lara Croft in Tomb Raider and commanding vast legions in Age of Empires. The keyboard’s mechanical keys are comfortable and will convey your commands instantaneously.

The one glaring issue is that function keys in some games are very useful, whether it’s activating class skills or analyzing character commands. This setup requires both hands if you want to use keyboard shortcuts to access these commands, which is basically impossible in titles where time is a factor. Granted, it isn’t necessarily a deal-breaker in all games, however, it’s something that shouldn’t be taken lightly.

Since the Blackwidow Lite keyboard is touted by Razer as a hybrid gaming and productivity device, it’s only fair it’s judged on how well it handles both these tasks. Of course, productivity is the one that’s hardest to judge between the two; after all, almost all functional keyboards can effectively manage the day-to-day office tasks. The Lite keyboard, at least, is considerably more responsive and comfortable than the average membrane keyboard.

The media bar is something the user misses more and more once they start using the device and the lack of a numpad actually reduces the keyboard’s productivity capabilities, which is sad considering that’s something Razer really concentrated on. But, as far as raw typing is concerned, the Lite manages to handle itself well, and the keyboard’s subtle lighting and unobtrusive appearance will work well in most office setups.

The Lite’s gaming performance, on the other hand, is exactly what you’d expect from a device by Razer. Precise, accurate and responsive. It won’t give you a problem when playing games like Thonebreaker, StarCraft: Remastered or Overwatch. Whether you’re ordering the soldiers of Zerg to destroy a Terran horde or switching between the special abilities of Ashe, the Lite gaming keyboard will parse your commands correctly and quickly.

Those that aren’t familiar with mini gaming keyboards might not like the One2 Mini that much. Not only does it slow down productivity and hamper typing, but it also makes gaming slightly more difficult than it necessarily has to be. However, if you’re interested in trying out a 60-percent gaming keyboard, then this definitely for you. The functionality is both robust and unintuitive, the lighting is colorful and the keys are comfortable enough. The One2 Mini definitely has its own unique appeal, however, it’s still kind of a tough sell considering for the same price you can get your hands on a top of the line mechanical tenkeyless gaming keyboard

Now, the Blackwidow Lite is actually one of these high-quality tenkeyless gaming keyboards we’re just from mentioning. In fact, not only is it aesthetically pleasing but it;s also easy on the wallet and fingers as well. Truth is, in this fight, the Ducky One2 Mini doesn’t stand a chance against the Blackwidow Elite. It’s better in every way and if you have to choose, then you might as well go for the latter. Oh, and that’s a decision you definitely will not regret.