Over the past decade or so, mechanical keyboards have become king. Gamers know this all too well. Not only are mechanical keyboards extremely durable, but they’re responsive and accurate as well. That solid feel and distinctive click after every keystroke you get from mechanical keyboards is something that’s glaringly absent in their membrane counterparts. If you’re in search of gaming peripherals that can provide you with this, then take a look at what the Roccat Vulcan 129 Aimo and the Kingston HyperX Alloy Origins has to offer.

When HyperX first broke into the gaming scene, its main goal was really straightforward. They wanted to provide affordable top-quality gaming headphones that have been stripped of all pretenses. However, since then, the company has expanded operations and has added keyboards and mice to the equation, to good effect at that. However, over time, the cost of their products has started to slowly go up and now many of them have premium price tags to match their premium products. One such product is the Kingston HyperX Alloy Origins keyboard. This full-featured, full-size mechanical gaming keyboard contains full RGB lighting features, a strong, firm chassis and comfortable key switches.

Vulcan, in Roman mythology, was a blacksmith to the gods. Because of this, the thrones, jewelry and weapons he forged needed to be both functional enough and aesthetically pleasing to a deity. All this is what the 120 Aimo is. Yes, they don’t come cheap, but what they can do justifies that hefty price tag. An elevated key design-style with springy, slim keycaps helps make the peripheral both responsive and elegant. A couple of design and software quirks stop the Roccat 1120 Aimo from sitting at the top of Mt Olympus. All in all, the keyboard is kind of like a preview of how superb performance married to striking aesthetics can bring about a new inventive product

Whether you’re looking to get the Alloy Origins keyboard as a gaming device or productivity tool, the peripheral looks great in almost any setup. This is in large part because of its small, compact and understated overall design-style. The HyperX Alloy Origins gaming peripheral is one of those more elegant, sleek keyboards out there and it comes with an aluminum-based black chassis. It doesn’t occupy a lot of room, or desktop space, measuring in at 17.4×5.2×1.4 inches which allows it to seamlessly and comfortably fit into almost any scenario. 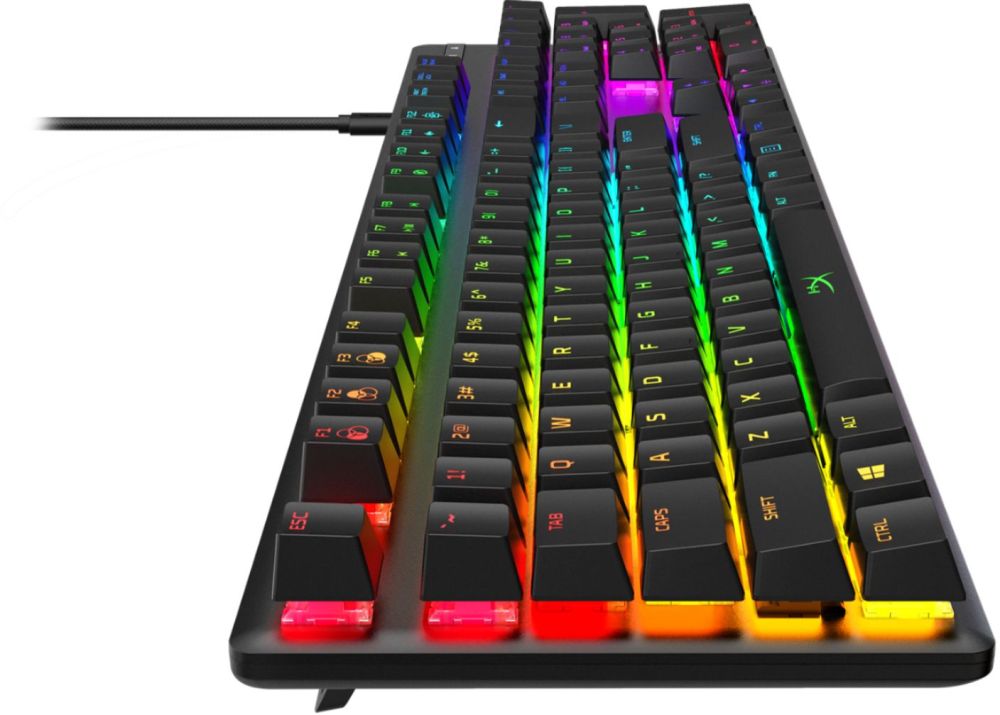 This device is basically your run-of-the-mill full-size gaming keyboard, however, with two interesting features that help separate it from the pack. The first thing is the 3 function keys it has to help the user switch between onboard presets. Whether this is something you really need will depend on how many PCs the keyboard will end up being connected to. If your going to be using it on more than one computer, then having dedicated buttons that’ll help activate different onboard profiles is actually a super helpful feature.

The second great thing about this board is that it has this tiny LED display located on the top-right that’s there to help the user keep tabs on Game Mode, Num Lock and Caps Lock functions. It is both a functional and attractive feature, and it’s even a mystery why more gaming keyboards aren’t including this in their arsenal.

The Vulcan 120 Aimo gaming peripheral combines elevated keycaps with an aluminum-coated chassis giving it that striking overall look. The RGB illumination can be seen through all the keys on the board, and not just through a small letter on the cap. When the device is fully lit up, you’ll barely be able to keep from just staring at it. Furthermore, it’s accompanied by a wrist rest that both feels and looks to seamlessly integrate into the total package. Photos don’t do justice to the Vulcan 120 Aimo unusual, eye-catching look. Everyone around you that sees is bound to want to have a closer look and inspect the device a bit further. 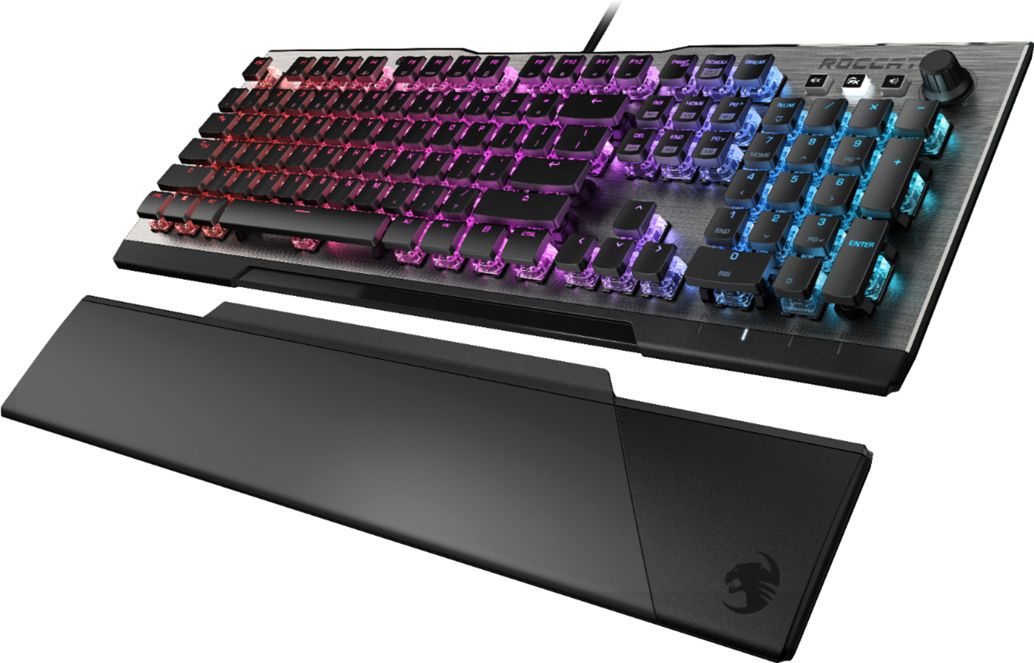 The keyboard measures in at about 18×9 inches with its wrist rest attached and 18×6 inches without it. That’s considerably big, and there’s a bit of wasted space on the sides of the board. It also, sort of, has discrete media key functions. It has a dial and mute button, which can be used to control the brightness or volume settings. Rewind, fast-forward, pause and play are all button shortcuts. They should’ve used a full media bar instead. However, it had consistent light settings customization capabilities and the volume dial works like a charm and proves and extremely helpful addition.

One of the reasons why the Alloy Origins board costs as much as it does is because it doesn’t employ the use of Cherry MX key switches. Instead, it uses HyperX’s proprietary switches which the company manufactured in-house. These switches are the HyperX Blues, the HyperxAquas and the HyperX Reds. The Blue key switches are tactile and clicky, the Aquas are tactile and quiet and the Reds are linear and quiet. The ones that feel the most similar to Cherry MX switches are the Hyper X Reds. Their resistance is sufficient enough for satisfying keystrokes and quiet enough for the device to make sense in an office setup. Also, they technically have slightly less actuation force and key travel than their Cherry MX Red counterparts, which gives them a stiffer feel.

Unlike most of the Cherry MX Browns, the Titan Switch Tactile switches aren’t mechanical key switches, as such, covered by dome-shaped keycaps and nestled into depressions. The switches, instead, stick out for everyone to see, covered by thin, small caps that put very little distance between the switch and the user. The keys have a really cool overall look, although, those angular caps will take a little getting used to.

Though still in a beta state, HyperX’sNGenuity software is what’s used to power the Kingston HyperX gaming keyboard. There’s a lot HyperX still needs to improve with this software of theirs, especially when the creation of game-specific presets is concerned. The NGenuity really doesn’t allow the user to do much, and all you can do with it is customize RGB illumination settings and then assign these customizations to different games and applications. It doesn’t reprogram all the board’s keys nor does it allow you to program macros. This makes it a fairly bare-boned software that really doesn’t match up to what its competition has on offer.

What makes things even worse is that it’s hard to even set up these said lighting profiles. Okay, if all you want is a preprogrammed color pattern or a solid color pattern, then that’s not too complicated to set up. However, if you want to create special colors or effects in different “zones”, then that may just prove a lot harder to achieve. Instead of just selecting a few keys, you’ll have to layer effects on top of each other and then choose different key functions for each one of them. It’s way less efficient and much more complex than what you’d find with, say, Razer’s Synapse or Logitech’s G Hub software.

Roccat’s proprietary Swarm software is what’s used to run the Vulcan 120 Aimo gaming peripheral. Assuming it doesn’t give you a problem to run, the Swarm software is pretty straightforward. But, updating the program, downloading the required software, connecting the board and patching up firmware can prove incredibly tedious tasks to accomplish. This software self restarts quite a lot and sometimes even doesn’t install properly before being rebooted which, in turn, means you’ll most likely have to go through certain procedures multiple times. Once you manage to bypass all this, however, Swarm does what it was designed to do. 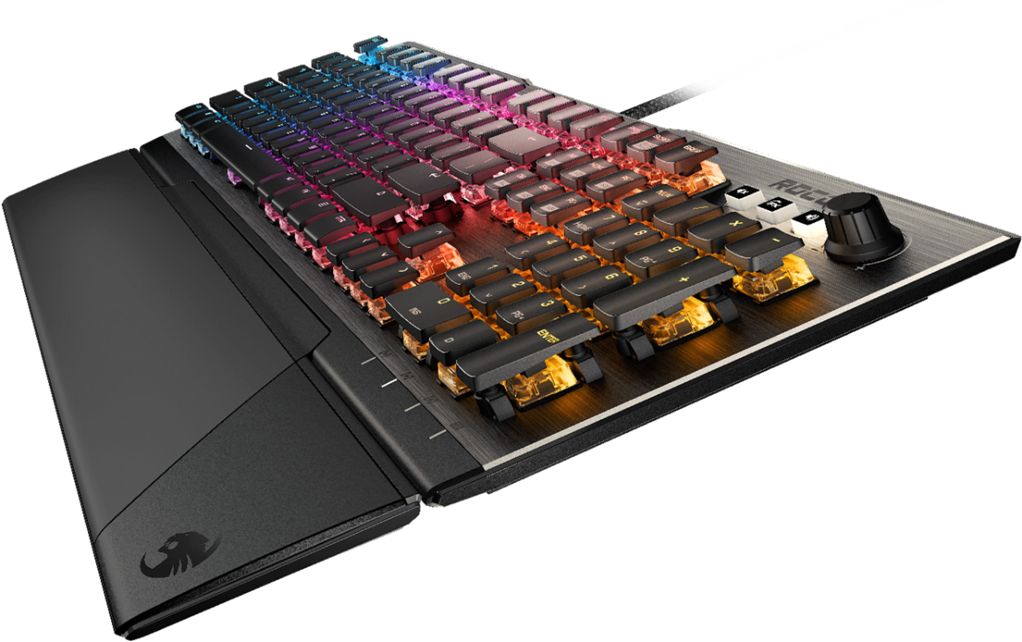 It can be used to reprogram all the key functions on the board, which happens to be a really nice touch. Also, it allows the user to customize and tweak the backlighting settings. Additionally, it has the Aimo option which helps one configure lighting profiles based on the application or program they’re running. Aside from these two things we’ve just mentioned, though, the Swarm can be used to program macros functions as well. With that said, there’s still a lot more this software can offer, especially when compared to what Logitech, Corsair, HyperX and the like have going on.

Profiles on the HyperX Alloy keyboard, unfortunately, don’t work as seamlessly as one would expect. Even if you’re able to get an app or program to recognize your profiles when you launch them when you go back to the desktop the board won’t revert back to the default profile. The NGenuity is just a bit too arcane and not polished enough. As far as gaming is concerned, though, when you run it through Final Fantasy, Tomb Raider, For Honor, The Witcher 3 and Overwatch, you can expect it to manage those titles perfectly. The HyperX Alloy generally hands all game genres pretty well, providing the user with precise and responsive keystrokes for high-octane first-person shooter games to the demanding skill rotations in MMO games.

You can ran the Roccat Vulcan 120 Aimo through titles like World of Warcraft, Tomb Raider, The Witcher 3, StarCraft: Remastered and Overwatch and all you’ll find is a keyboard that performs sublimely without a hitch. You can use it to play all the popular PC game titles. The responsive, springy keys are a perfect match for all genres, from blasting your way through Protoss bases to conjuring healing spells as the character Moira. This device even has a few applications that’ll, especially, interest MMO gamers. What, you ask? The fact that it’s considerably easy to program macros functions.

Okay, the fact that the Kingston HyperX gaming keyboard doesn’t use Cherry MX keys will sting a bit, however, the in-house key switches developed by HyperX themselves aren’t that bad. Fortunately, though, the Roccat Vulcan doesn’t use Cherry MX switches as well, which helps put both keyboards on a level playing field. Furthermore, being a new RGB mechanical gaming keyboard with such a relatively low price tag makes this peripheral too hard to ignore. With that said, the compelling marriage of functionality and form Roccat has managed to achieve with the Vulcan 120 Aimo make it arguably one of the best gaming keyboards the company has ever manufactured. Not only is the Vulcan attractive and well-designed, but it also offers tangible features that’ll help users in games that require repeated, rapid key presses. This one goes to Roccat and the Vulcan 120 Aimo. Probably that’s why the Vulcan is the blacksmith to gods, all he makes is perfection.