Logitech has been manufacturing high-quality gaming mice for several years now, and this has helped give rise to the Logitech G900 Chaos Spectrum which happens to be a near-perfect mouse. Logitech threw in everything but the kitchen sink when it came to the G900 Chaos Spectrum, with buttons galore, swappable sides and a striking overall design. Anyway, suppose you’re looking for a gaming mouse that’s the complete opposite of this. Something lightweight, simple, smooth and costs less than $150, then maybe the G Pro Wireless is what you should be looking for. 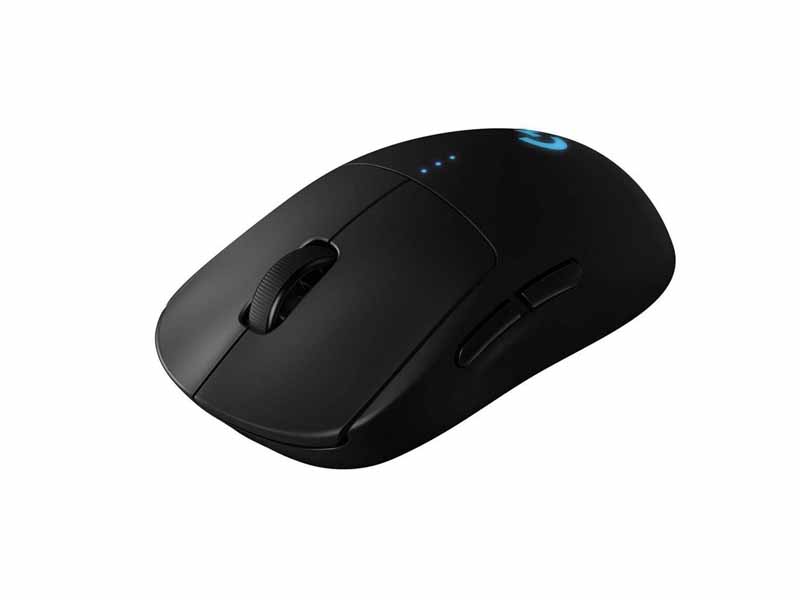 While this gaming mouse both feels and looks very different from its G900 cousin, the performance it offers is just as exceptional. This sleek, small gaming mouse has a top-notch sensor and flawless wireless performance, however, with no extra weight and a stripped-down, simple design. The same things that make this mouse desirable to esports tournament gamers is what might make it tough to sell for the people that just want a standard, solid wireless gaming mouse.

That being said, the G Pro gaming mouse is still exactly what Logitech set it out to be. While it doesn’t come cheap, especially when you consider you can get something like the G900 for around $110 or so, the G Pro will most likely be perfect for the hardcore PC gamers in search of excellent wireless gaming mouse performance for high-octane and competitive multiplayer games.

When most people first heard about Logitech’s new G Pro Wireless gaming mouse, they expect to be basically a simple, wireless version of its predecessor the original G Pro gaming mouse. However, that mouse is actually already there and it goes by the name Logitech G305. The G Pro Wireless, instead, is a totally brand new design, which really can’t be compared to the other gaming mice available in the Logitech mouse catalog right now.

This wireless gaming mouse is a relatively small one that measures about 4.92×2.5×1.57 inches. Although being on the tiny side it’s still comfortable enough on either claw or palm grip. It has a somewhat of a perfectly ambidextrous overall design with 2 thumb buttons on both sides (by default), a clickable scroll wheel, a right button and a left one. Also, dots-per-inch (or DPI) sensitivity can be adjusted with a button that’s found at the bottom of the gaming mouse. On other mice, this button is often found below the scroll wheel or above the button on the right, however, Logitech decided to switch things up and do something new. 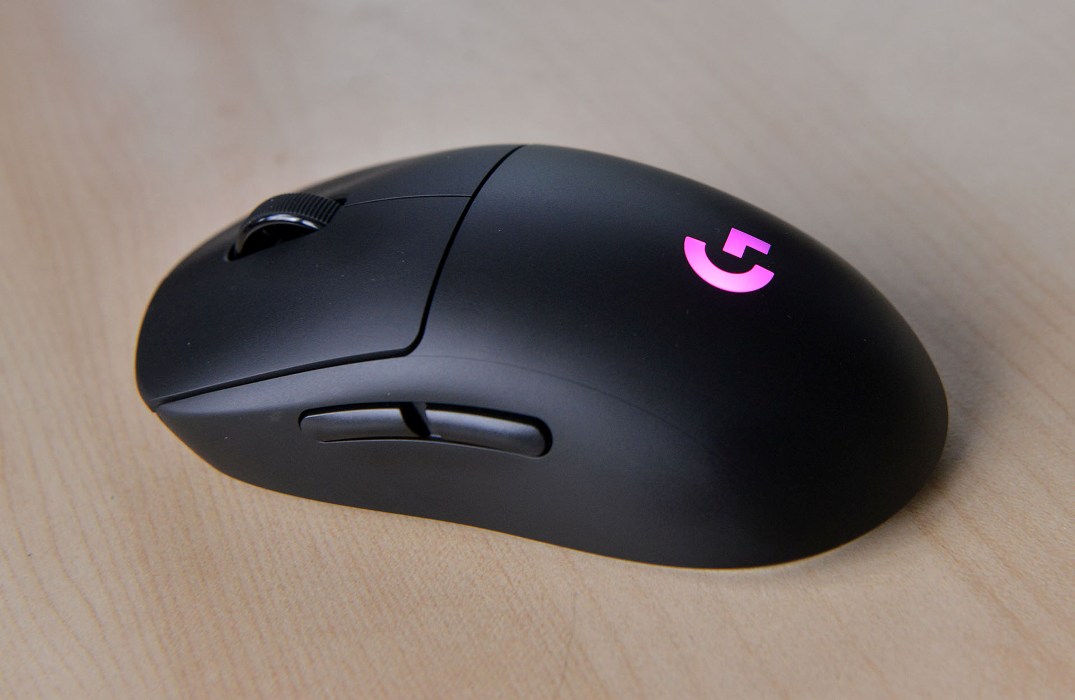 It’s still not too clear whether true PC gamers are going to appreciate this decision they’ve made, but there is actually some logic behind it. The G Pro Gaming Wireless mouse was primarily designed for competitive multiplayer gaming. When you run Fortnite, Starcraft, Overwatch and the like, there’s a high chance you already know which faction or character you are going to play, which DPI settings you’ll need on the mouse and which control setup will best suit you, right? Of course, things can be programmed in a way whereby DPI is cycled via thumb buttons. Otherwise, DPIs can be swapped between matches or after one is done with the program.

All in all, this is an all-round smooth wireless gaming mouse that doesn’t have any unnecessary protrusions. This means no textured grips or finger rests, which also means that it can also be comfortably used by left-handed gamers as well. In fact, thumb buttons can be swapped out for smooth panels as well, depending on handedness. As such, this Logitech wireless gaming mouse can have 0 to 4 thumb button features, and changing configurations shouldn’t take the user more than half a minute.

Oh, and the mouse’s USB dongle can be stored inside a small compartment found beneath the device. Although you can also swap out that storage space for Logitech’s Powerplay battery, making it a charging mouse pad that can connect mice wirelessly as well.

This wireless gaming mouse can use either Logitech’s new G Hub software or the standard Logitech Gaming Software, depending on what you prefer. The Logitech Gaming Software is simple, reliable and robust but, sadly, both feels and looks a tad bit outdated. The Logitech G Hub, on the other hand, is, yes, shiny and slick, however, it still has a couple of bugs that need to be ironed out. So, you’ll need to choose very wisely in this regard.

That being said, both software products are functional and allow users to control a lot of the Logitech G Pro Wireless. You can customize RGB backlighting for the 3 DPI-indication dots found at the front and the G logo located at the palm-rest as well as button commands and DPI levels. Unfortunately, the dots can’t be seen all that often. 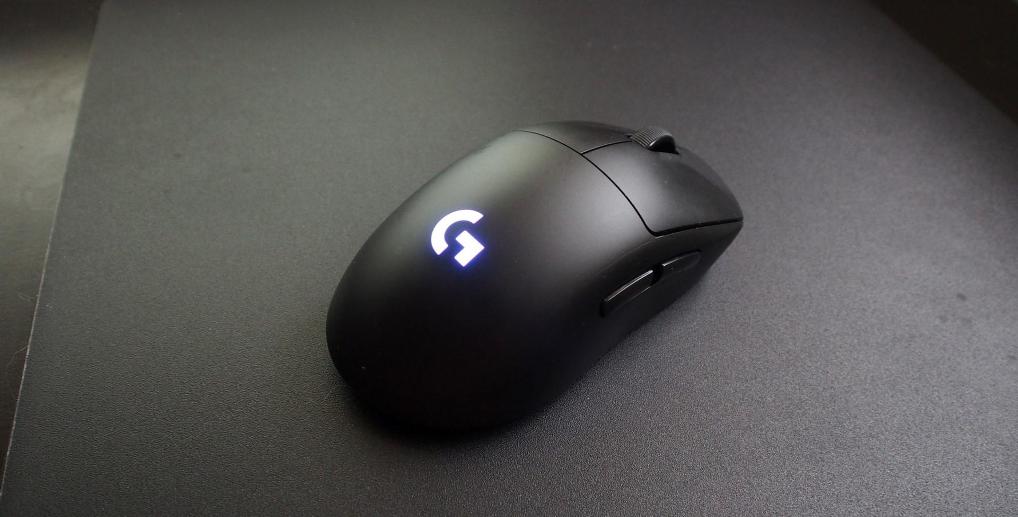 Logitech claims that their mouse can last around forty-five hours before the battery dies, depending on the lighting profiles being used. In practice, the battery averagely drains by around two percent every hour of use, which means that the projection the company gave is probably correct. Your play can continue while it charges thanks to the fact that it comes with a long, braided charging cable. Also, its wireless reception is downright flawless.

This gaming mouse also has an impressive click latency. You won’t experience any delays whether you’re using it wirelessly or wired. The receiver can be plugged into the USB adapter, and then this connects to the cable. This ensures the receiver can be placed closer to your mouse instead of on the PC, which then allows for better performance.

As far as the performance of such a mouse is concerned, there are three main things you need to consider. There’s how its wireless works, how well it tracks and how comfortable it is.

Logitech has done great on the last part because when it comes to comfortability, the mouse is absolutely superb. The company has done an outstanding job managing to come up with something that’s light and small yet still feels incredibly comfortable on both hands and in all kinds of grip styles. Furthermore, it makes this all happen while still being ambidextrous. 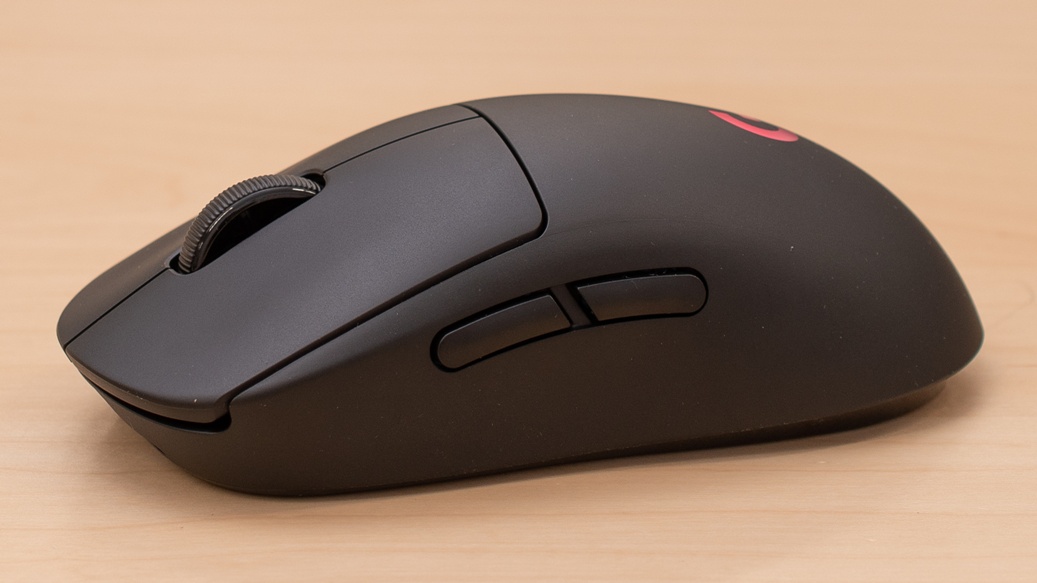 Weighing in at just about 80-grams, it’s extremely lightweight for a wireless gaming mouse, which makes it easy for the user to move it around fast for long periods of time. Additionally, with 125×63.5×40 mm dimensions the mouse is perfectly suited to both claw and fingertip grip styles. It still has enough bulk and heft at the rear end to allow for the palm grip style for users that have small hands. However, those that have bigger hands might find this bulk to be a bit small.

Another place where Logitech has done extremely well is when it comes to the mouse’s tracking performance and HERO sensor. Assuming you couple the device with appropriate mousemats, keeping in mind that optical sensors usually don’t play nice on reflective surfaces such as glass and stone, the G Pro performs superbly. It’ll respond exactly how you expect it to. In the wireless department, this wireless tech is the first of is kind that offers true wired0like responsiveness. Compare it to some of the other gaming mice products on the Logitech roster, say like the G403 wireless, and you’ll clearly get to see how much more superior and sharper the wireless tech on the G Pro really is.

This wireless gaming mouse from Logitech is a near-perfect product. Okay, while no gaming mouse can really ever be unilaterally perfect for all PC gamers, this is literally the closes thing to it. Not only does the device have a truly ambidextrous overall design but it also gives users the option wireless connection without having to sacrifice performance as well as without having to have a heavy design or a short battery life as a compromise. Also, the tracking the HERO sensor provides is simply just out of this world. 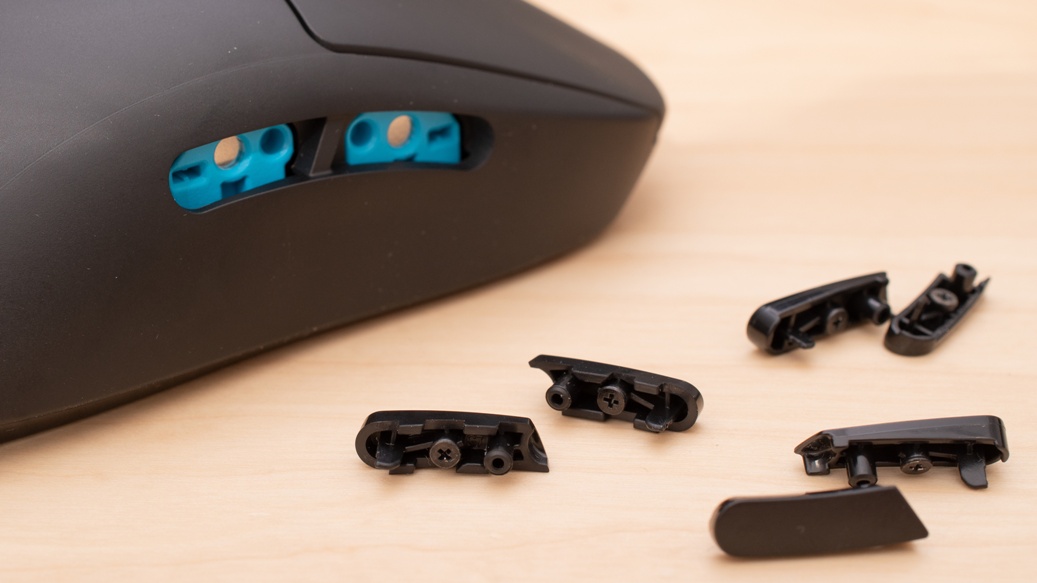 The only two potential downsides are that, one, the DPI switch isn’t at the top of the gaming mouse and, two, its considerably hefty price tag. The DPI switch being below the mouse is a bit annoying because of the switching between doing regular desktop work and gaming In the price department, yes, you do get your money’s worth from the modular side button functions, its high-quality wireless technology, the excellent sensor and wired/wireless hybrid functionality, however, it overall just doesn’t feel or look like a premium gaming mouse product, for instance, say what you’d get with the Razer Mamba and the like.

Bottom line, yes you could get something way cheaper, such as the G305 or G603 gaming mouse, however, if you’re in search of something that’s going to stand out on a competitive esports tournament scene, then this mouse is definitely for you.

Can you use it while it charges?

Its battery isn’t replaceable. However, not only does it charge extremely fast, but the mouse can be used while it charges. It has an incredibly flexible cable that allows for charging while you game. A wireless charging mousepad will ensure your mouse always stays above 95%

How long does the mouse take to charge?

It takes around two to four hours to fully charge the device. You can do it for longer if you want, however, that might have some detrimental long-term effects and it’s recommended you don’t exceed the four hour mark.