Logitech’s G933 Artemis Spectrums were once one of the best headsets you can find some time back. Maybe around 2015 or so. With superb sound quality, a comfortable fit and fantastic wireless connectivity, it was one of those dependable and easy recommendations, even though it was kind of on the pricey end. Now, a few years later, Logitech has released its lesser priced G935 model, which is actually a subtle upgrade of the G333 that has tried to keep all the best things about what its predecessor had, and all at a relatively lower price tag. 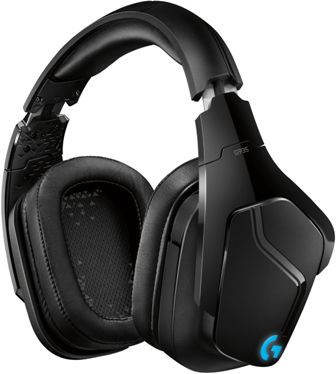 The Logitech G935 Wireless headset, just like its G933 counterpart used to be in its heyday, is one of the best wireless gaming headphones currently on the market. Not only does it fit well and sound good, but it’s also compatible with very many other systems out there. This headset, at the same time, still has a couple of features that are kind of unnecessary, like its bulky design and RGB lighting.

That being said, a few oversights and missed opportunities aren’t enough to compromise what’s actually a very strong overall product. Not only is the Logitech G935 wireless a headset, at this price range, that’s well-worth considering, but if you choose to get it, you’ll definitely be getting all your money’s worth. Read more and see why.

The Logitech G935 is considerably big wireless headset that measures about 7.4×7.7×3.4 inches. However, it’s not that heavy and weighs about 13.4 ounces. Just like it’s G933 counterpart, it has a black-colored plastic chassis that’s partially shiny and partially matte. The headband and both the ear cups are adorned with geometric patterns, which is actually what helps give it that authentic and distinct “gamer” vibe, although without over doing it. It’s square-shaped ear cups are what make it look different from your more traditional and standard gaming headset, however, there unusual shape doesn’t really make it better or worse.

The G935 gets props right from the start for having its USB dongle feature hidden under the magnetic cover of the left-side ear cup. This is nice because wireless dongles often tend to get lost if they aren’t stored properly in a sensible place. Like many other headsets on the Logitech roster, the G935 model also contains a retractable, well-hidden mic in the left-side ear cup, of which you can store very easily when you aren’t using it. Behind the left-side ear cup is where you’ll find the volume control dial, microphone mute button, three programmable keys and the power button. It easy to see why all these button functions have been crammed together, however, it might have been a tad bit easier for users if they were evenly spaced out between both the ear cups.

At first glance, the Logitech G935 Wireless headsets are much more colorful than they initially look thanks to the glowing ‘G’ symbols on both ear cups as well as the LED strip on the headband. Not everyone likes or is fascinated by RGB lighting on headsets, considering you can’t actually see the lighting yourself once you’ve got the headset on, however, they’re colorful and bright in case you want the people looking at you from the back not to get bored. 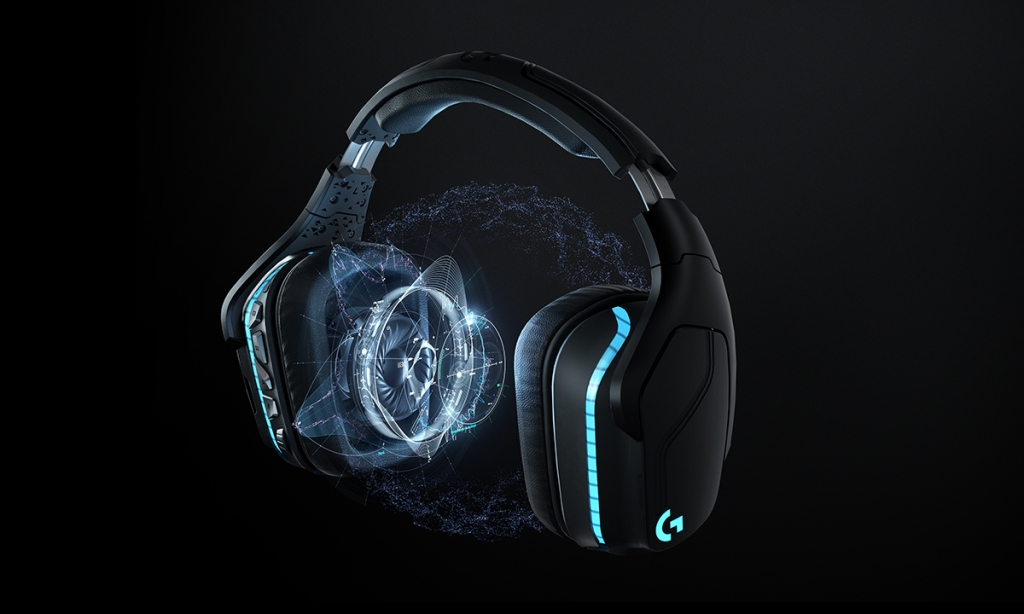 The Logitech G935 has a padded headband and leatherette ear cups, both of which feel very breathable and supportive. Neither the ear cups nor the padded headband press down too much, which means that the headset can be worn for hours on end without giving rise to any ill effects, even though you wore them with glasses on. The earcups’ unconventional shape prevents them from perfectly sealing the ears, however, that also means no sweaty ears, which is somewhat of a fair trade, no? 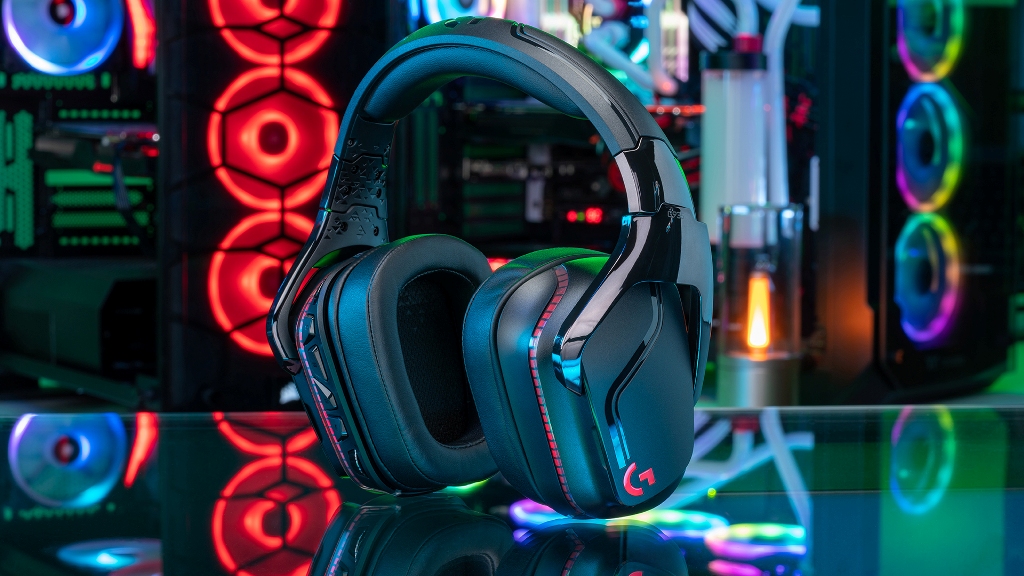 The Logitech G935 headphone works very well with PCs, however, if you’ve got a Nintendo Switch or PlayStation 4, as well, then the headset’s value triples. The wireless dongle feature makes connecting to a Switch, Xbox One or PC pretty easy. Its 3.5mm audio jack cable can be used to connect to Xbox One and other mobile or hand-held platforms, although you won’t get very rich sound quality like this.

Anyway, once you’ve gotten the headphones all set up the way they should, the sound is perfect. From the back and forth dialog of Mary Jane and Peter Parker in Spider-Man to the crashing open seas in the Witcher 3, this new Logitech headset provides users with a delightful balance of treble and bass, as well as sound effects and vocals too. Okay, it doesn’t provide the richest nor the best soundscape, but what it does provide is more than enough for something that costs this much.

Another good thing about this headset is that it does very well with music as well. The bass, by default, might just be a little too much on the quiet side of things, however, other than that, it handled everything from Baroque to rap to rock with relative ease. Almost every genre of music comes through with a balanced and clean sound. Furthermore, it can also be a good everyday listening devices, provided you’re down with having to use the 3.5mm audio jack feature.

Due to the size and overall design of the Logitech G935, however, you may not want to necessarily use this product as replacement for your daily music headphones. If you don’t have a problem blocking everything and everyone out, and have plenty of space in your backpack or bag, then maybe you can make something like this happen. With that said, the gadget will still always look a bit odd if worn anywhere that’s not your gaming nook, bedroom or living room. What we’re basically sating here is just keep it in the house. 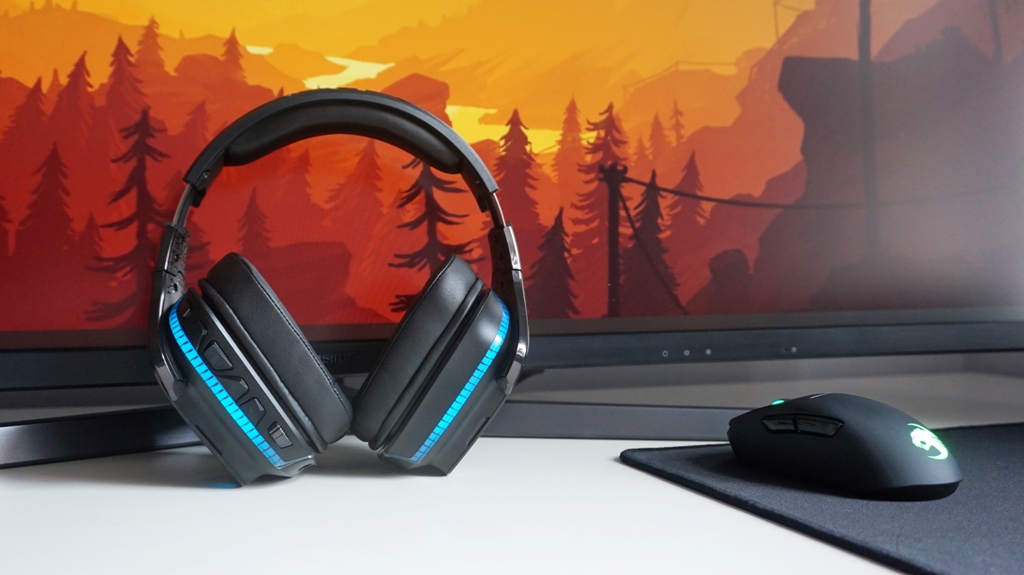 If you want to use the G935 wireless headset to its fullest potential, then you’ll need to think of installing Logitech’s G Hub software. There’s a lot you can do with this program when it comes to customizing experiences, from setting up different illumination patterns to tweaking sound options. Although, arguably the best feature of them all, in the G Hub that is, is the 7.1 DTS surround sound as well as the many different equalization profiles. With that said, however, these many different profiles really don’t offer considerable advantages between flat profiles and default stereo sound.

As far as the lighting is concerned, it does not actually really add much in all honesty, however, it can be synced easily with other Logitech gaming peripherals, if you happen to be the type that likes unified setups. Anyway, more importantly, the microphone sounds fantastic. It broadcasts vocals clearly and loudly. There’s a little bit of reverb from time to time and it can end up picking background noises sometimes, however, it’ll do job just fine, and is even ideal for casual conversations and online gaming.

While the Logitech G935 Wireless looks a tad bit old-fashioned, it’s actually a rock-solid wireless gaming headset that has been reasonably priced. It has flawless wireless features, a comfortable fit that can allow you to wear the headphones for long periods of time and sound quality that can’t be faulted much really. Okay, the SteelSeries Arctis 7 may just be the better option for wireless gaming headsets at this price point, however, the fact that Logitech have proven to be so dependable over the years means that you can trust them to give you a quality device that can stand the test of time and prove its worth in the process.

Does the Logitech G935 Wireless have Bluetooth capability?

This wireless headset has 2 operation modes. Wireless Off and Wireless On. It doesn’t have Bluetooth compatibility per se.

How do you reset the headset?

First, connect the headphones to USB power. Then, on the microphone side, carefully remove the side plate making the internet structure visible and bare to you. Once you’re through with this, get a tiny pin, find the hardware reset button, press and then hold the press for about two to three seconds or so.

How do you connect the headset to Xbox?

The headset can be connected to your Xbox console through the controller using a 3.5mm audio jack cable. In fact, this is how you’ll connect it to most other mobile and hand-held platforms as well.