People often misuse “the best” all the time. They often tend to use this phrase to mean “pinnacle” or “epitome”, when, in fact, the true definition is merely embodiment. In that spirit, we’re to tell you that Razer’s DeathAdder V2 device is the pinnacle of wired gaming mice. It’s basically the gold standard, an example of what all gaming mice should be. That being said, there are still a few things that Razer could have done better. 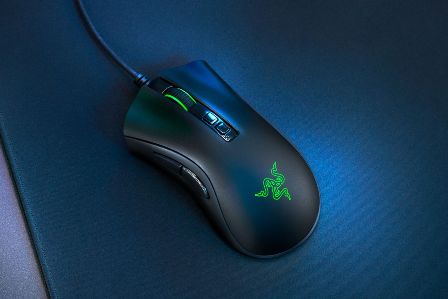 The Razer DeathAdder gaming mouse has been on the market, in some form, shape or way, since around 2006. In that time, at least ten million units have been bought. The Razer DeathAdder V2 gaming mouse, like its predecessors, has pleasant RGB lighting, textured finger grips, a considerable amount of extra button functions and an ergonomic shape. This new version also glides across surfaces more easily and has a more sweat-resistance top on its face as well.

There’s not much wrong with the new DeathAdder V2, except maybe for the availability of gaming mice in this price range that are more innovative and ambitious, as well as a piece of software that’s a little confusing. Razer has managed to turn an oldie into a goldie, and has demonstrate why these gaming mice have been going strong for nearly fifteen years now. 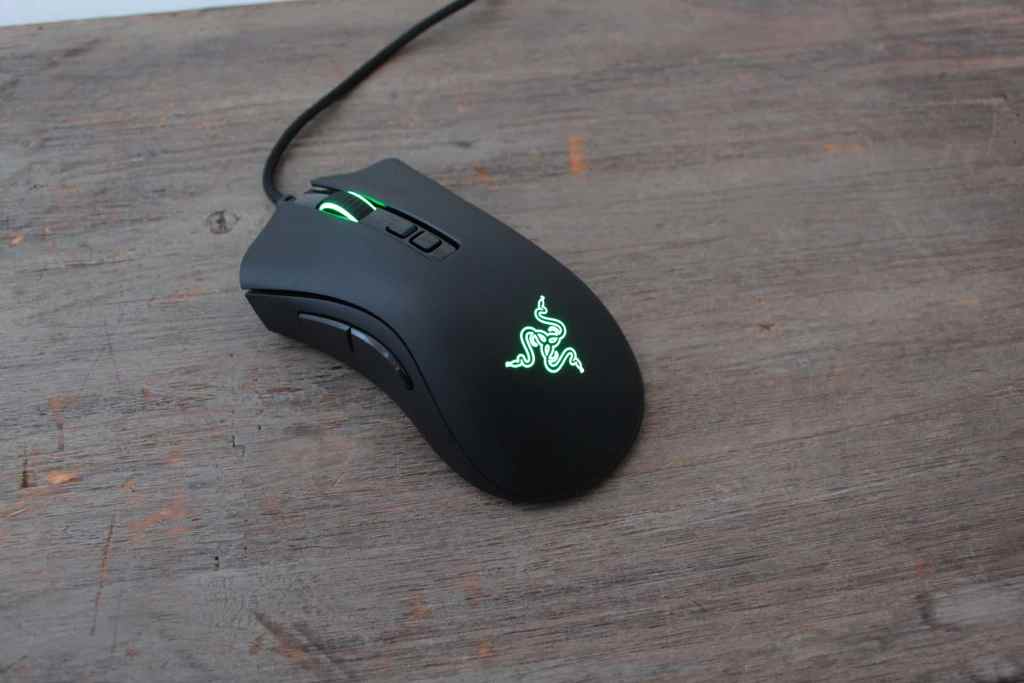 The Razer DeathAdder V2 device is a right-handed, ergonomic gaming mouse with a curved, high profile on either side accompanied by four extra buttons. There is a left-handed DeathAdder for those of you that use your left hand, however it’s based on a much older and somewhat dated design. Anyway, this time around, Razer have used a more hydrophobic material to construct this mouse making it a lot easier to tightly grasp when having those long gaming sessions. The mouse’s gliding feet beneath it are also manufactured using a new type of material that allows the device to glide with less friction.

It has pretty much a similar button layout as found on the ones that came before it; two thumb-button functions found in a tiny semi-circle, a clickable scroll-wheel feature, a right button and a left button. The only one big difference with this new model is that the 2 DPI (dots-per-inch) sensitivity button functions are not connecting rectangles, rather they’re 2 tiny squares that are around 1/8 of an inch apart from each other. This helps make clicking them easier, however, you might get a little slower at switching between them. Overall, the design is quite okay, though they still can do a lot more to improve things. 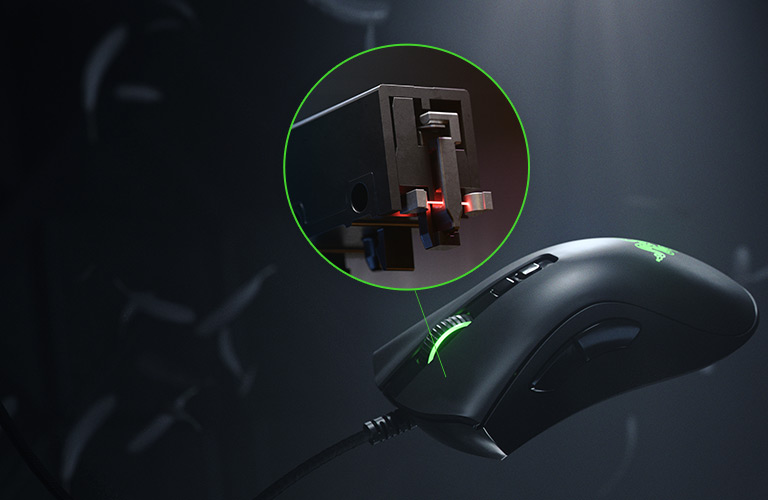 The Razer DeathAdder V2 mouse has one feature in particular that’s pretty cool. It allows you to store up to 5 onboard profiles now. Awesome, yes? This come be very useful for LAN parties, high-octane tournaments or any other scenario where your regular-old computer just doesn’t cut things. Otherwise, this new installment is very much like its other DeathAdder predecessors, with the Razer logo embossed on the device’s palm rest and the RGB backlighting on the scroll-wheel.

To control the mouse’s lighting, as well as many other important features on the device, you will have to get your hands on Razer’s Synapse Software. This program that’s rich in features has a plethora of options, particularly for those people that intend on creating their own illumination patterns or those that are interested in syncing the gaming mouse with smart light bulbs. It’s pretty straightforward to reprogram buttons or adjust lighting with the Synapse software. However, if you want the mouse to synchronize with other Razer devices you might have or if you want to come up with specific profiles for individual game titles, then the procedure can get a tad bit more complex.

The Synapse program has no less than 8 tabs and each of them can as much as 4 sub-menus. This bit of software is a comprehensive one, however, not necessarily one that’s easy to use. Although, it deserves a little more credit for managing to be way more stable than it once was in the past. Razer’s new DeathAdder also has a brand-new Focus Plus optical sensor, which is capable of reaching DPI levels of almost 20,000. Okay, yes, maybe you will never need to have it set that high, however, the sensor is also both precise and accurate, even when just at the low DPI levels. 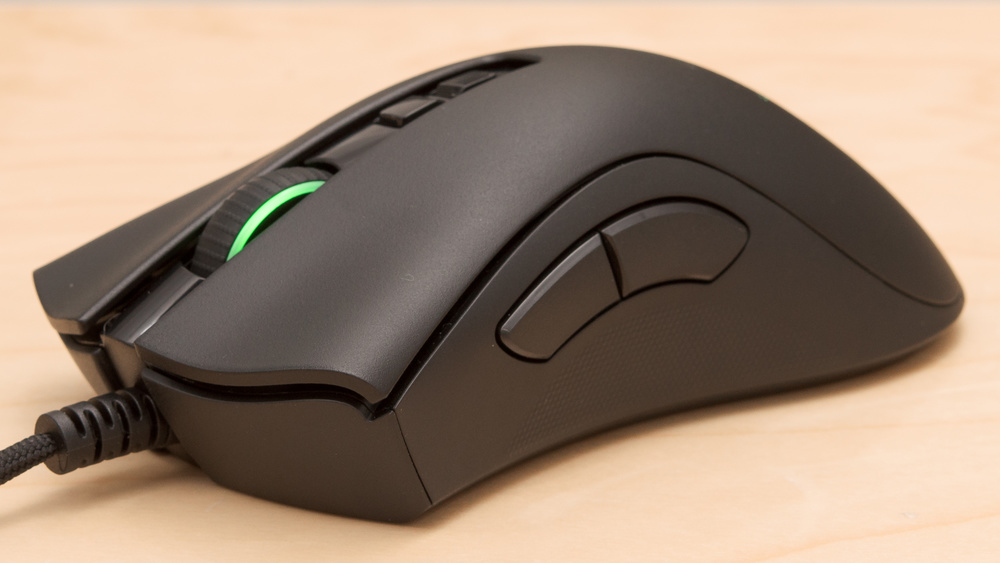 If you ran the new DeathAdder through popular titles such as World of Warcraft, Thronebreaker: The Witcher Tales, Age of Empires, Overwatch and Tomb Raider, you can expect a device that’ll perform excellently through each and every one of the genres. Commanding your legions to go attack and conquer was as easy as guiding the Queen Meve character through the Lyrian countryside. Shifting DPI functions on the fly was pretty simple as was reprogramming button functions.

Because this gaming mouse has such a responsive sensor and an extra 5 onboard profiles, it can actually be a very good gaming mouse to use in tournament play. First-person-shooter enthusiasts might prefer gaming mice that have “sniper” thumb-button functions, while the massively multiplayer online gamer might not see the need for more thumb buttons.

After more than a decade, it’s a bit hard coming up with fresh new descriptions of the Razer DeathAdder. Until now, though, it’s still one of the most consistently good and versatile wired gaming mice out there, and this V2 model is no exception. Yes, for an extra ten dollars, you can get your hands on one of Logitech’s top-of-the-line gaming mouse, the G502, and, yes, for ten dollars less you can get the Corsair 65 that’s slightly more specialized. However, the new DeathAdder V2 gaming mouse has almost no deal breakers. Ride with Razer another fourteen years.

Will you need to install additional drivers and software to use the DeathAdder V2?

The standard mouse functions can be used by simply plugging the DeathAdder into any available USB port on the PC. However, if you want to enable the mouse’s advanced features like Chroma lighting customization, profile setting and macro recording, then you’ll need the help of Razer’s Synapse software. Basically, yes, you can use device without having to install additional software programs, but you can’t use it to its full potential without it.

How are settings changed on the new DeathAdder V2?

If you want to change your DeathAdder V2’s settings, including lighting, keybinds, macros and the like, then you’ll have to employ the use of the Synapse program once again.

How is the DPI changed on the Razer DeathAdder V2?

If certain button features have been assigned to the “On-The-Fly Sensitivity” function, when you press and hold down those said assigned buttons while you move the scroll-wheel down or up a bar will be displayed on the lower-right of the computer screen and this is where you can adjust the sensitivity settings of the mouse by steps of fifty DPI.