Almost everyone in the eSports gaming community is suddenly trying to do everything they can to get a good-quality mechanical keyboard product. If you’re a big-time gamer or volume typist, then you’re probably considering letting go of your membrane key switch ideas and are leaning towards joining the mechanical keyboard bandwagon. In fact, the market is even so saturated with such devices nowadays it can get confusing when it comes to picking one. But, luckily that’s why such articles exist. We’re here to help make things slightly easier for you. Below are two keyboard products that certainly won’t disappoint.

Is there really anything on this planet Earth of ours that travels faster than light? Nothing you know of, right? Anyway, there’s one thing that’s recording speeds close to that. This thing is the new optomechanical switch, manufactured by Razer themselves. These new types of mechanical key switches are what helps complete the Huntsman Elite package. Not only were these relatively new keys made in-house, but they’ve also not been included in all Razer products. The Huntsman Elite keyboard was one of the pioneer devices to enjoy them. Razer says that these incredibly comfortable keys of theirs will stay relevant in the eSports gaming scene even ten years from no. There not many companies that can say they’ve done it better than Razer when it comes to these mechanical switches.

The MasterKeys MK750 is one of those high-end, well-appointed gaming keyboards. Although, its features are matched by most of its many other competitors out there, including the Huntsman Elite by Razer. Anyway, the MasterKeys 750 has everything one would ever need from a high-quality gaming keyboard. There only two features that it lacks that you’ll find in most of the other popular boards on the market. For starters, you won’t have access to a USB or audio pass-through. Secondly, you don’t have entire sets of replacement keys.

If you want a membrane and mechanical keyboard hybrid, then the Elite keyboard is just what you need. Truth is, it has the same outward look as the Ornata keyboard, also a mechanical/membrane hybrid designed by Razer themselves. Its chassis that holds its elevated keys is made from aluminum material and this small key elevation gives the board that distinct, clean and sophisticated appearance. It’s an aesthetically-pleasing gaming peripheral that manages to catch the eye yet still keep an understated appearance. Though, if you’re getting because you want the trademark striking gaming appearances Razer is so accustomed to, don’t worry. It also offers this. However, this doesn’t mean you can’t purchase it for the office workstation. It’ll comfortably fit into those setups just fine, and that’s not something most mechanical gaming keyboard products can claim to achieve. 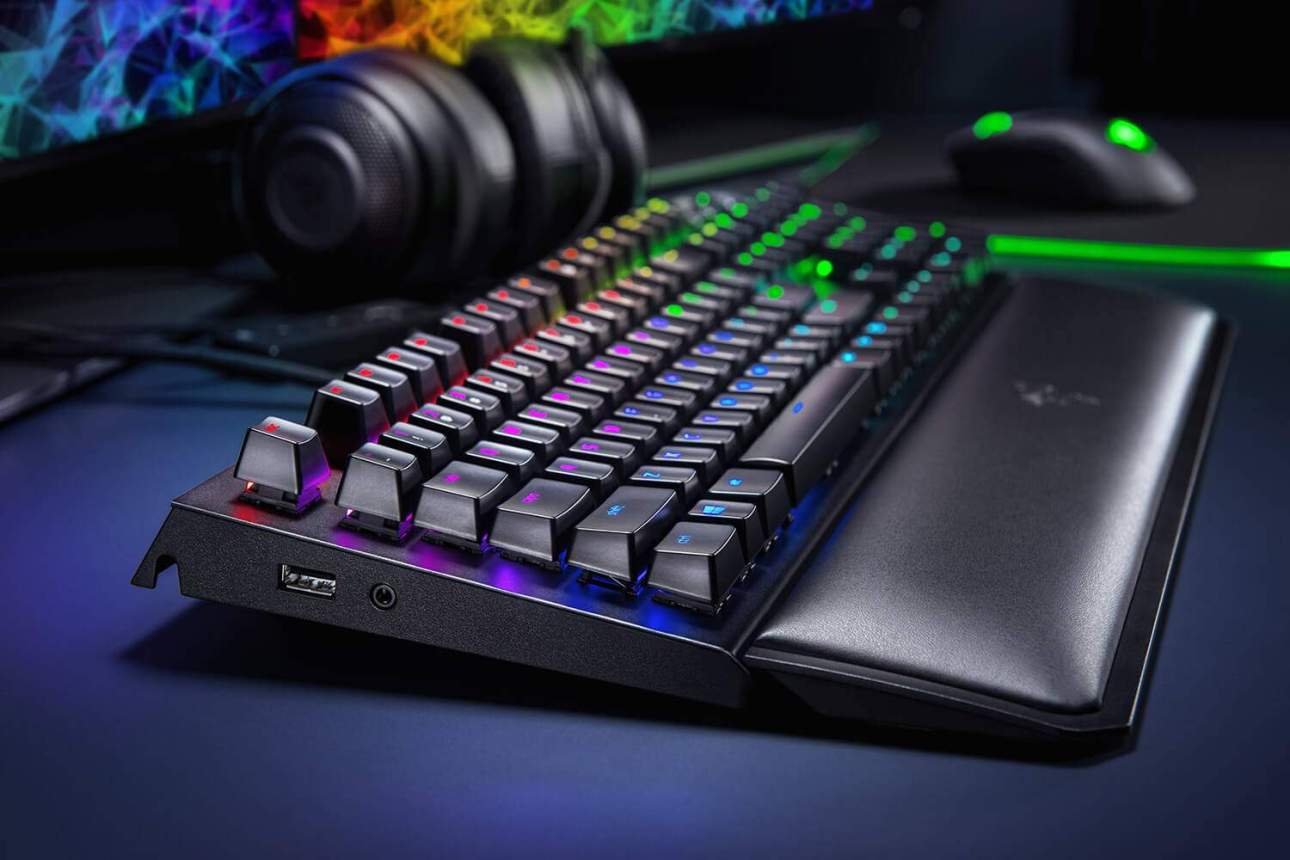 Why the Elite board one-ups many of the mechanical gaming keyboards on the market, including the ones on Razer roster, is in large part because of newly-included discrete media keys. These circular and rather good-looking key functions are designed to make it easy for you to play/pause/rewind/forward audio content. Volume controls, on the other hand, are controlled by the ridged dial. Although, this same feature can also control the backlighting of the board. Nowadays, not many gamers, especially the ones that take part in high-octane eSports tournaments, will want a keyboard that lacks these, now essential, media keys. In fact, if your keyboard doesn’t have such, then it can be hard sometimes to call it a premium product. Razer got the memo and decided to start incorporating them into some of their new keyboard products.

The MasterKeys MK750 board has a floating key switch design and keeps tight bezels. It has an anodized aluminum top-plate and a slightly-sparkled nice finish. It uses the famous Cherry MX mechanical switches, and you can choose from either Cherry MX Browns, Cherry MX Blues or Cherry MX Reds. Though the wider keys feel a little heavy. When typing, you’ll hear a thocky, rich sound from generally all the keys, which is something that isn’t common on top-tier, high-end gaming keyboards. It’s a full-sized keyboard with a PU leather, memory-foam palm rest, RGB lighting, discrete media key functions, on-board controls, a removable Type-C USB and cable management troughs. Cooler Master even decided to add extra RGB illumination zones along the front and sides of the board they’ve branded “light bars” which make the peripheral loo that much cooler. 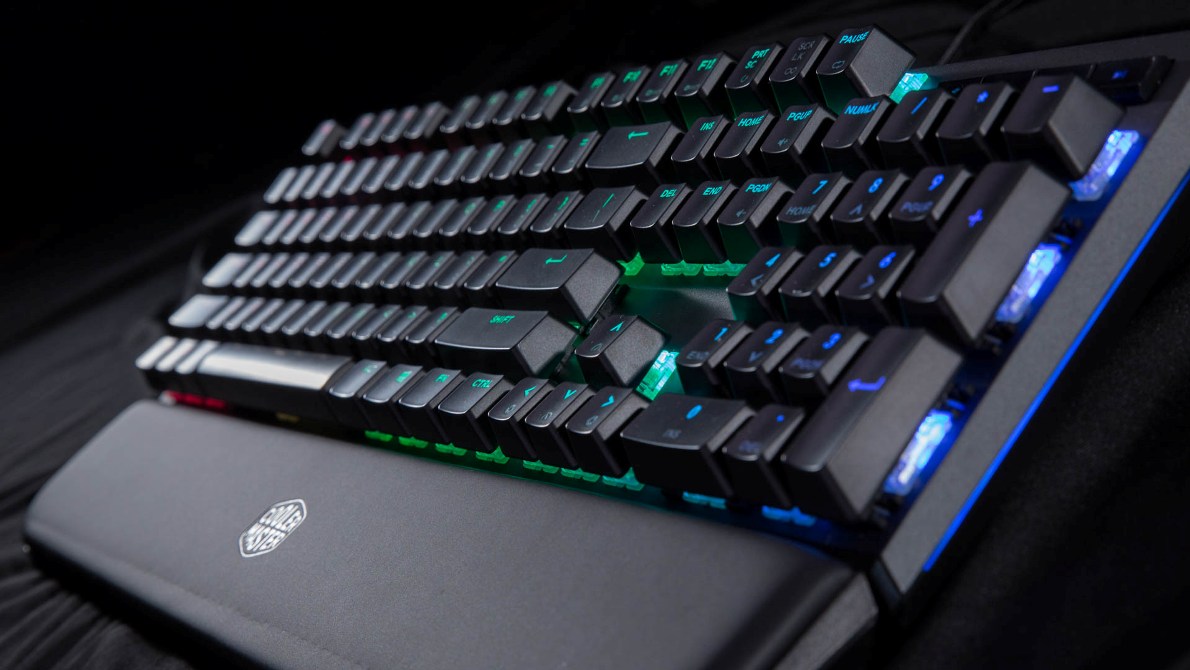 The standard bottom row on the MK750 has an important detail that helps take the device to the next level. In fact, it’s kind of a jab at Corsair considering the fact that they’re well known to look down upon standard bottom row layouts, which makes it hard for one to employ the use of aftermarket keycaps. Cooler Master even incorporated this shot they made to Corsair in a lot of their marketing materials. However, more importantly, it’s a heads-up to the enthusiasts that are considering the MasterKeys MK750 but want to switch out the keycaps later on. All in all, the device has a nice modern, sophisticated and clean overall look

Arguably the best thing about the Razer Huntsman Elite is the purple optomechanical switches. The purple switches, underneath the keycaps, are linked to metallic springs alongside plastic cylinder-like objects that stand behind them. These plastic cylinder-like objects is literally where most, if not all, the action is. The keyboard’s actual key switch is basically there for feel mostly. Rather than instigating electrical connections using traditional mechanical forces, similar to what other standard mechanical gaming keyboards use, optomechanical switches by Razer make sure that connections being made are through infrared lighting. When you actuate Razer’s optical keys, light rays are what’s used to transport signals to the hardware. The same procedure is used to ensure these signals reach your computer as well. 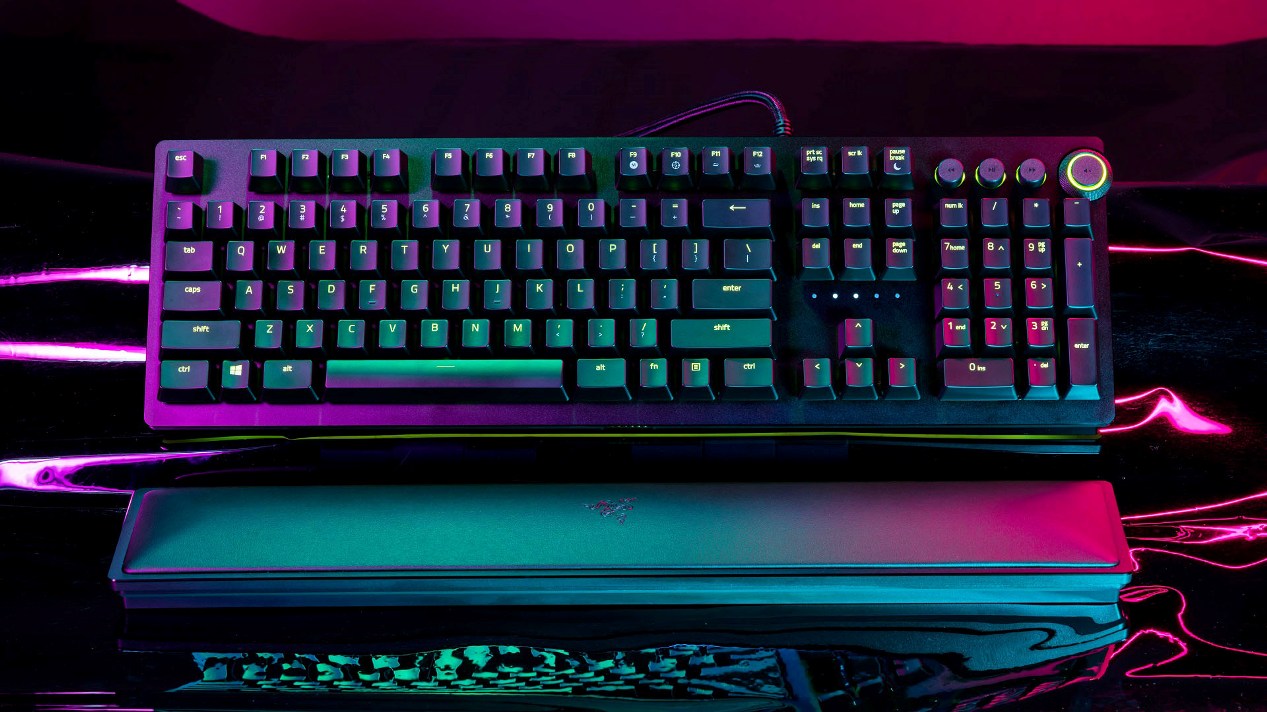 The MasterKeys MK750 has lasered, ABS plastic keycaps with nine replacement keycaps. The keycaps themselves are PBT double-shot products with translucent legends that are purple-colored Cooler Masters. Lately, people have been going crazy for the aftermarket/custom keycaps and many bigger OEMs, such as MSI, HyperX and Corsair, have started getting in on the action. The only issue is maybe the board should have just come with the PBT caps rather than the black-colored ABS ones. We think they probably went this route because they thought people like the black-on-black uniform look. Also, maybe they didn’t want the board to cost more than it does and that’s why they opted not to go all PBT caps. 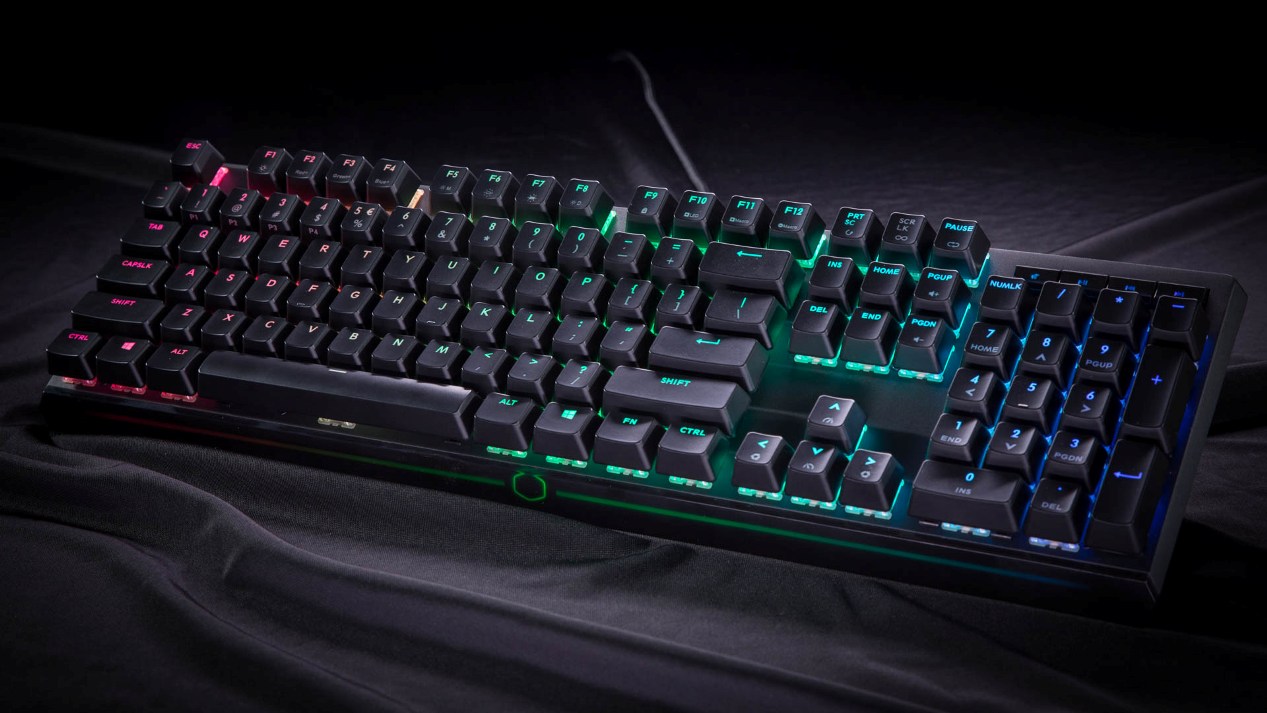 The Synapse 3 product, a piece of software that Razer itself created in-house, is what drives the Elite gaming peripheral. Fortunately for users, Razer managed to out-do itself with this particular product. Not only does the Synapse 3 actually perform way above-average, when you first run the product it’ll go about explaining what all the screens do. There’s no doubt this is very helpful, but just like with most things in the world it has its downsides. For instance, for you to complete relatively easy tasks, such as reprogramming key functions and the like, you’ll have to look through several different screens. Anyway, the Synapse actually works well on the Huntsman keyboard and it’s the reason why it’s so easy to change the keyboard’s illumination settings. Though, there’s more. This program is also what will allow you to create your own macro key functions. 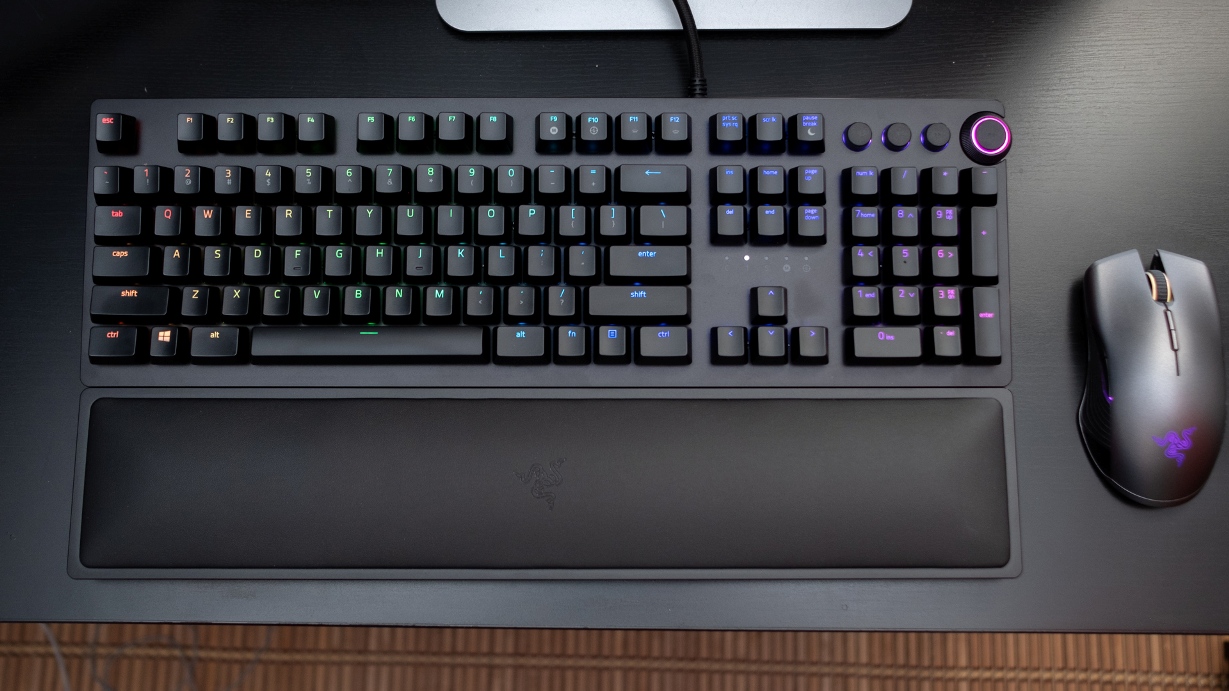 Developers at Razer are usually fond of including some built in profile settings for certain titles. Games like Overwatch and Diablo 3 trigger these in-built profiles on the board. Okay, yes, these said in-built settings are actually not that bad and can even be considered a nice touch, however, Razer doesn’t really direct you to the games that can trigger these features. Furthermore, if you happen to be the type that is fond of creating and using their own profiles settings then you’ll have to keep in mind that coming up with such on this board isn’t easy.

The software, that you’ll need to download, will allow you to customize the RGB backlighting as well as create macro key functions. You can bind these said macros to given keys, edit all recordings and title macro key functions. You can pick modes, punch in color codes and choose layers as well. The GUI found on the software is what will help when it comes to key bindings. All you need to do click the keys on the GUI and then save. Furthermore, you’ll also be able to import or share profile settings using Prf files. Oh, and remember that all these settings will be saved onto the board and not the PC itself. Lastly, this software also supports quite a number of languages. These include Swedish, Portuguese, Spanish, Russian, Italian, German, French, Korean, Japanese and Chinese (both simplified and traditional). 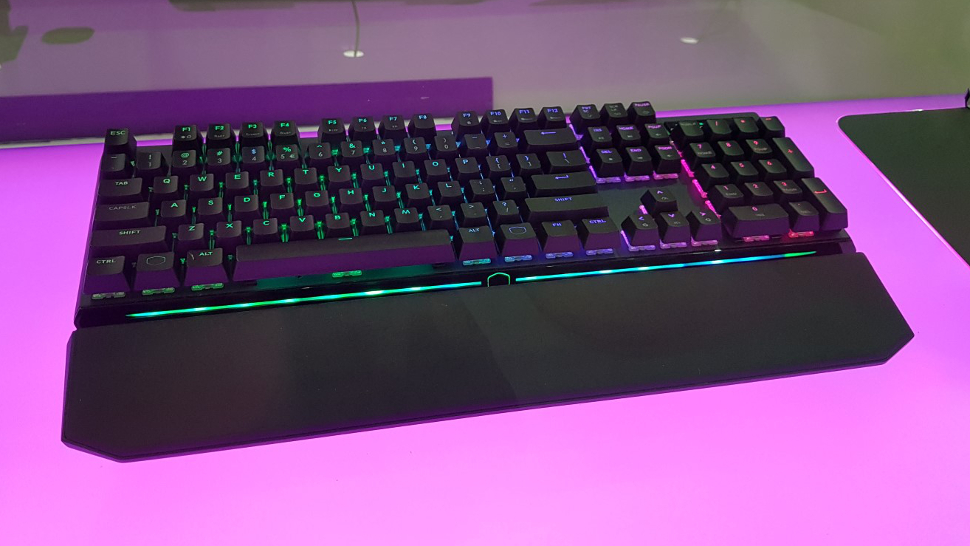 Razer are always boasting about how fast their optpmechanical key switches are and they’re constantly saying how superior they are to the standard, run-of-the-mill mechanical key switch. Although, the truth is, you really still can tell for certain which switch is actually faster, especially as far as gameplay is concerned. However, the one thing about them that’s 100% certain is that they’re actually outstanding performers. They work super well. Running around the huge maps in Fortnite and Overwatchusing a gaming keyboard has never been easier. If you know about the Razercompany, then you know that the decision-makers here would rather let the whole business go under before they release to the world products that offer below-average performances. Fortunately, it doesn’t look like they’re starting to with the Huntsman Elite keyboard

Even though the Masterkeys MK750 allows you to download software, it also provides you with certain onboard controls. These onboard control features fall into 2 categories; macros and shortcuts. The user gets five different profile settings, which they can toggle through by pressing the Fn key plus 4, 3, 2, 1 or Esc. You can also switch through color profiles by pressing the Fn key plus F4, F3 and F2. If you want to record and manage the macro keys, the Fn key plus F1 starts the recording while PrtScplus the key saves the macros. When it comes to gaming, you can be sure that this keyboard won’t have a problem running most of top-tier titles out there. But that’s not all though. It’s also quite a good productivity tool. Yes, it may not be the best at the latter but it does enough to be considered one

If a keyboard with the fastest mechanical key switches is what you’re looking for, then most of your focus should concentrated on the Huntsman Elite peripheral. There not many gaming boards out there that can claim to have faster switches than this device. However, with this product, besides getting really fast mechanical switches, you’ll also be buying something that looks really gorgeous. But then again this is a Razer product so pleasing aesthetics kind of go without saying, no? Anyway, honestly speaking, this board is almost a perfect gaming peripheral. If full-size, high-end gaming board that use Cherry MX key switches is what you want, the MasterKeys MK750 will give you just that. It has all the design elements, software controls and features that most of its competitors have, including the Huntsman Elite. In fact, it’s hard to really say which one is better between the two and it’s for that reason this one here is a tie.