Razer’s optomechanical switch sets are still some of the best things they have to offer, and they do very well for both gaming and typing. This novel key switch by Razer ensures signals are sent at lightning speeds. They also give the ability to reprogram every key as well as play around with the RGB lighting settings.

If optomechanical switches are something you’re considering but you don’t have the desk space for a full-size gaming keyboard, the Huntsman TE is what you should be concentrating on. Sadly, though, the missing num-pads limits its productivity potential. Otherwise, some of the most interesting parts on the Razer Huntsman Elite, such as the wrist rest and media bar, were left out of what’s basically a miniature version of it.

Anyway, let’s look closer at some of the differences they have, shall we? 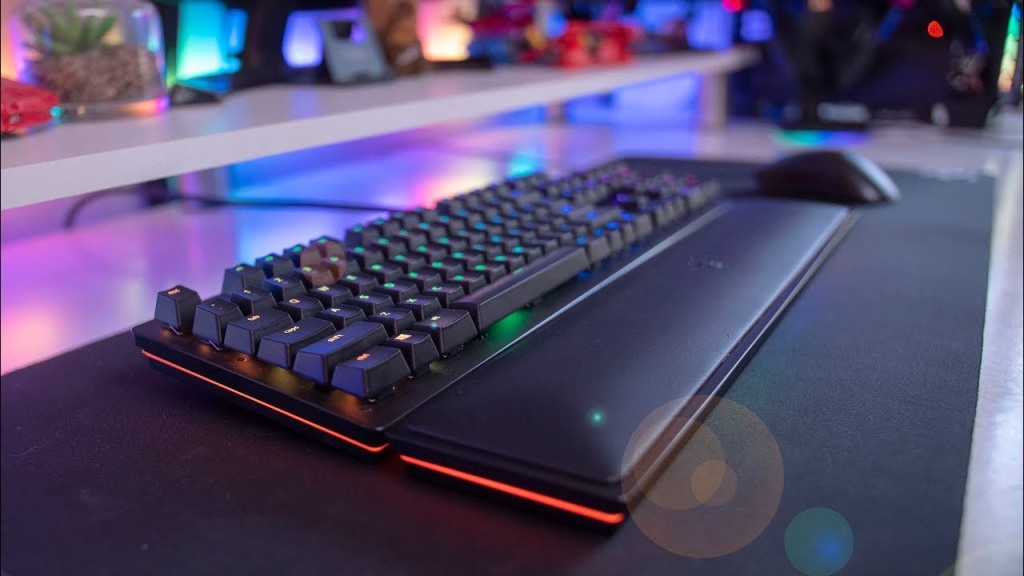 The Huntsman Elite is an attractive gaming keyboard that has a design that’s both a bit more understated and a bit more striking than its other Razer counterparts. In fact, it’s one that can get away with being in an office setup, which is something you can’t say about most gaming peripheral. Anyway, what makes it better than many of its Razer gaming keyboard counterparts is the discrete addition of media controls. These circular button features can fast-forward, rewind, pause or play music or audio files, and volume can be controlled via ridged dial in the same area.

The keys on the Huntsman Elite keyboard stand slightly elevated above the device’s aluminum chassis giving it a very distinctive and futuristic look. It measures around 18×6 inches without its wrist rest support and 18×10 inches with it. Although the wrist rest is very comfortable, with a firm plastic chassis and blush foam fabric, it’s still considerably sizable and ends up taking a lot of space. A magnetic connection will help make sure that the keyboard and wrist rest sit nicely in place, regardless of whether the user keeps the laptop flat or decides to prop it up.

The Huntsman Tournament Edition is a sleek, small and pretty plain gaming keyboard. Measuring in at around 14 x 5.5 inches, this keyboard does not take up a lot of space and doesn’t have extra keys to bog it down. It has a plain black plastic chassis, with a tiny Razer logo embossed above the arrow keys. It lacks that flair Razer is well-known for, however, that does not mean that it isn’t pleasing to the eye, either.

One of the most interesting things about the Hunstman TE is its removable cord. Like most tenkeyless keyboards, the Huntsman Tournament Edition’s USB cable is removable, which allows gamers to store it in their suitcase or backpack without fear of damaging anything. Also, this cord is a USB-C connection and not a traditional micro-USB. We’re not certain of how much of a functional difference it makes, but it’s still good to see that Razer is trying to embrace a new and more efficient standard. 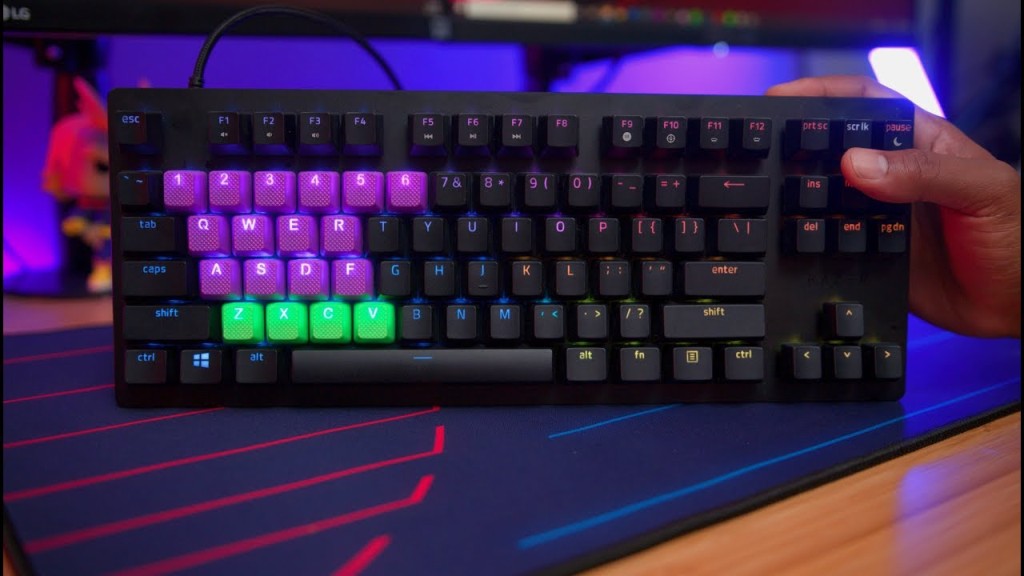 The main highlight on the Huntsman Elite keyboard is the purple optomechanical switch by Razer. If a keycap from the Huntsman Elite is pried off, what will be revealed is an unusual mechanism that consists of a purple switch with a metal spring attached to it alongside a clear plastic cylinder. Instead of making electrical contact via mechanical switches, like a traditional mechanical keyboard or typewriter would, optical switches use infrared light.

When Razer optomechanical switches are actuated (actuation force of 45 grams, 1.5mm of actuation), a light beam signals the keyboard’s hardware, which is then transmitted to your computer as usual. However, it’s still hard to say whether this has practical effects on typing or gaming. Remember, yes, signals may move at lightning speeds, however, one doesn’t interact or process stimuli with their keyboards at relativistic speeds. If we did, one Fortnite session would end up taking 100,000 years to resolve.

The Huntsman Tournament Edition uses linear optomechanical switches, which are very similar to Cherry MX Reds. The keys have to be depressed all the way up before their commands are accepted, and they are theoretically a little more quieter than tactile switches. In practice, linear switches are actually much more comfortable,.but they aren’t that quiet though. It lacks that clicky machine-gound sound its tactile counterpart has.

Every time a key is pressed you’ll hear an audible tap each time, which can be a distracting factor if the keyboard is in an office setup. However, to be fair, you would never hear it if you were at a gaming tournament or convention but it’ll still be most likely one of the loudest gaming keyboards you’ve ever handled. 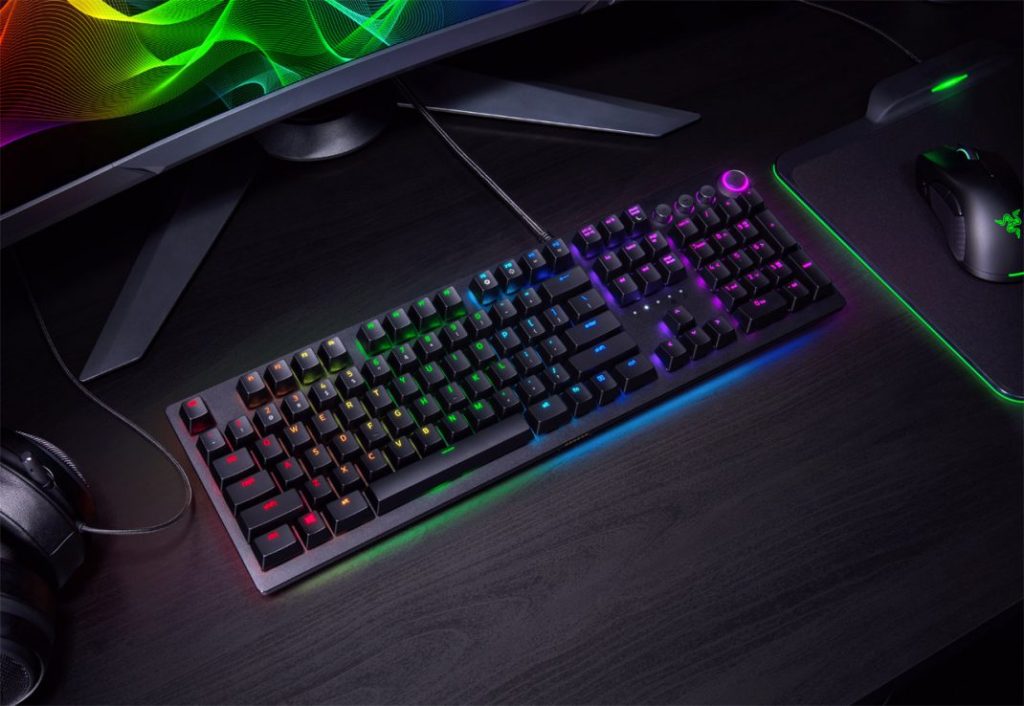 The Synapse 3 software by Razer is what powers the Huntsman Elite gaming keyboard. Although the program explains what each individual screen is designed to do when first run and is and is pretty looking, it forces you to click through so many screens to do things that are relatively simple, such as reprogramming buttons or setting up profiles. Anyway, at least it’s functional. You can use it to link performance and lighting profiles with individual games, and alter RGB lighting as well as program macros fairly easily.

Razer’s mercurial Synapse software is also what powers the Huntsman TE as well. It allows you to do more or less the same things you can do with the Huntsman Elite. Sometimes, the Synapse doesn’t work so well in other Razer devices but in the Huntsman TE it works just fine.

However, perhaps the most interesting thing about the Tournament Edition, though, is that alternate sets of key commands can be set up. While this peripheral lacks extra keys, it gives the user the ability to program entires new sets of key commands which will be revealed whenever a designated button is pressed. This essentially means that the number of keys at the user’s disposal can be doubled. 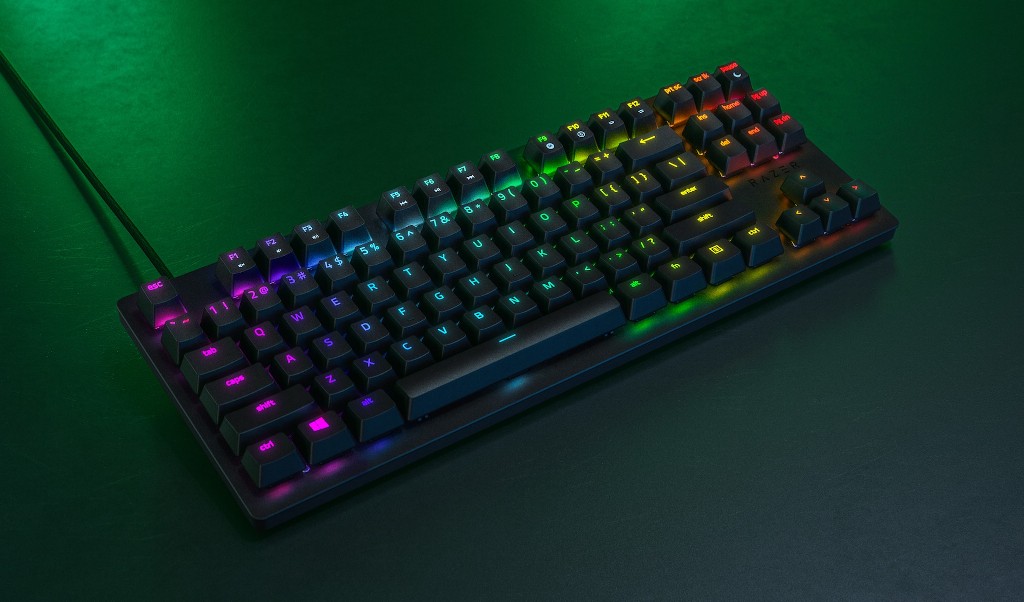 It’s a bit hard to say for sure whether Razer’s optomechanical switches operate better than the traditional mechanical switches when it comes to gaming. But, if anything, they certainly do work extremely well. For one, you can effortlessly roll through Overwatch’s battlefield as McCree, activating your special abilities as you gun down enemy combatants. In StarCraft (Remastered), you can build bases thanks to keyboard shortcuts, leaving you gaming mouse free for more important pressing tasks.

On titles ranging from World of Warcraft to Baldur’s Gate, the Huntsman Elite really excels. Fans that are familiar with Razer devices know that the company would rather die and close its doors than to release a keyboard product that did not offer fantastic in-game performance. The Hunstman Elite keyboard is no exception.

As many other Razer devices do when it comes to gaming, the Huntsman Tournament Edition does extremely well, and you can expect it to faithfully execute your every command you give it instantaneously. Whether you’re ordering workers to build more homes or swinging Brigitte’s flail, you’ll never have to wonder whether the Tournament Edition is going to execute the command you give it.

Though, there’s one caveat. While optomechanical switches do indeed parse commands much faster, it extremely difficult testing such in real-time. All we can really do here is go by what Razer claims their machines can do. 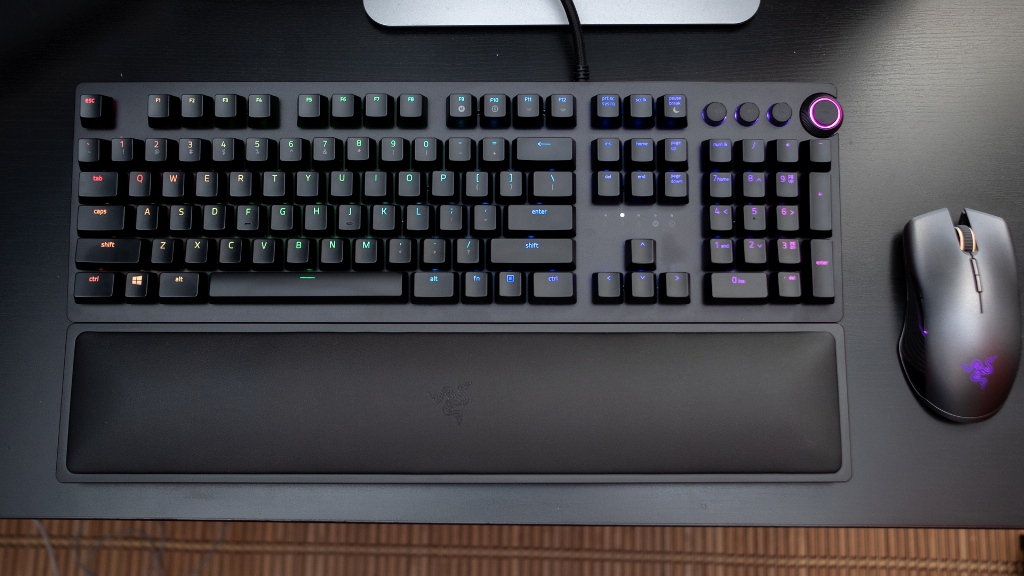 The Huntsman Elite gaming elite is an ambitious product that manages to deliver plenty of what it promises it will. It’s both comfortable and gorgeous, and the switches on it seem to match the enormous potential they have. In fact, Razer claims that these types of switches can last two times longer than the more traditional mechanical switches you’ll find out there.

The Huntsman TE keyboards also provide very clear value propositions. For starters, with this option, you’ll be getting some of the fastest mechanical switches available in the smallest overall package. This peripheral has a specific audience it’s targeting and Razer have tailored all the keyboard’s features to them. With that said, it still might be a bit hard to convince true gamers to go for this. However, esports enthusiasts that love gear by Razer and want to try out a novel key switch can give this device a go.

If you really have to pick between the two, then your best bet would be to go with the Razer Huntsman Elite.