Mechanical keyboards are still very much the in thing right now. Long-haul coders, hardcore gamers, etc are opting out of membrane-based keyboards and going for their more clicky-clacky counterparts. Today, we’re going to take at two top-drawer mechanical gaming keyboards and pit them head-to-head.

On the other hand, they say nothing on the universe travels faster than light. Well, the novel optomechanical switches found on the Razer Huntsman Elite keyboard use just that. The Huntsman Elite is one of the pioneer keyboards that got Razer’s new optomechanical tech. These switches aren’t only comfortable but supposedly also going to still be relevant for the next ten years or so.

Picking between these two top-notch gaming keyboards won’t be easy, that’s why this article is here to try and make things a little easier for you.

German manufacturers Roccat have pretty much cornered the in-your-face gaming keyboard market. Their Suora FX is a colorful gaming keyboard that has a slightly skeletal finish and has more or less the same advantages the Vulcan 100 Aimo does, including its durable design and impeccable performance. Most gamers out there will absolutely love this peripheral. A 1000Hz polling rate and advanced anti-ghosting make sure that the user’s frantic button pressing is registered all the time. Additionally, you can fully customize individual key lighting using Roccat’s software.

The design of the Razer Huntsman Elite, for the most part, looks a little like the mechanical/membrane hybrid, the RazerOrnata. The keys are slightly elevated above the keyboard’s aluminum chassis, which gives the peripheral a distinctive and futuristic overall aesthetic. It’s a really good-looking gaming keyboard and the design-style it has going on is generally a bit more understated and a bit more striking than many other of its Razer counterparts. It won’t seem out of place in office setups, which, as you know, is no small fete for most gaming peripherals out there. 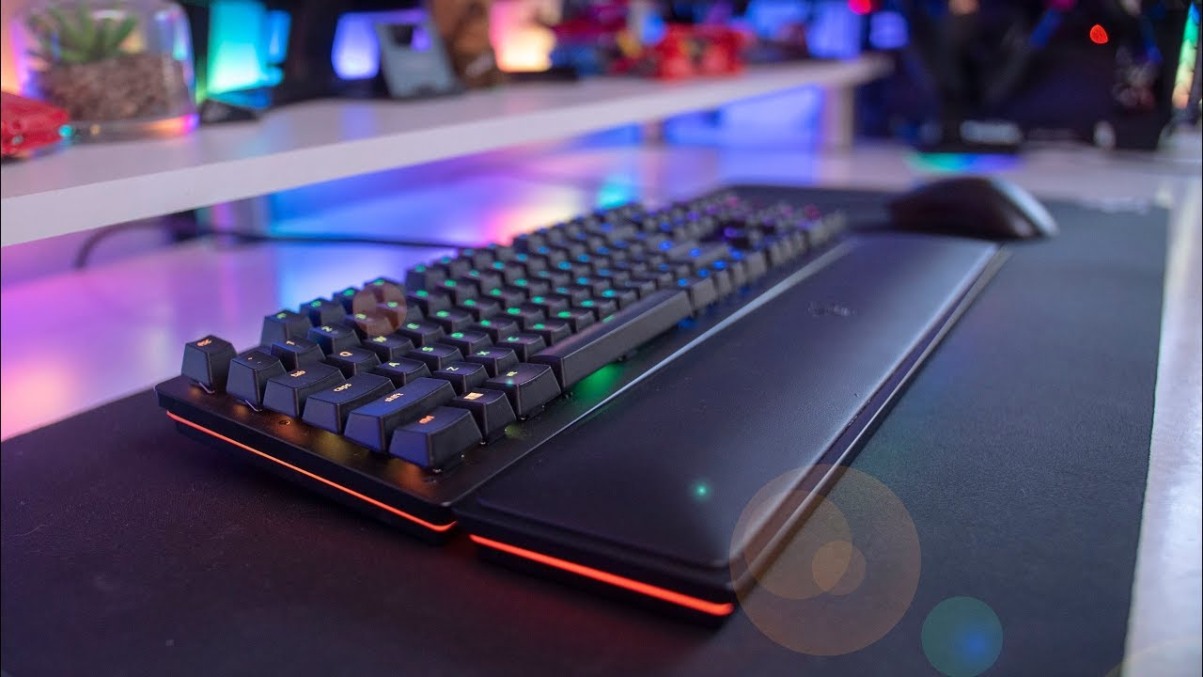 What makes the Elite way better than many other Razer peripherals that have been released is the inclusion of discrete media keys. These pretty and circular button functions can be used to skip forward, skip backward, pause and play audio tracks, and the ridged dial feature is for volume control (but can also be used to control illumination, which is quite a nice touch). Discrete media keys are something you can’t omit these days if you want to be considered a premium gaming peripheral. It was a long time coming for Razer but they finally got there. It one-ups the Suora because unlike its counterpart from Roccat, the Elite comes with a sizable wrist-rest which is made up of a very comfortable foam fabric. The keyboard and wrist rest are held firmly together by a magnetic connection.

When it comes to design, the RoccatSuora FX is kind of between the funky Roccat Vulcan 100 Aimo and your regular-old gaming keyboard. The keys are on a flat aluminum board that doesn’t have any casing covering up the switches. But, the caps come all the way down to around the keyboard’s edges so there not that much overall exposure. Plus the keycaps can also snap off pretty easily. In fact, they come off rather too happily, so you should practice care when transporting it around. Besides that, at least there no gaps that collect debris and dust particles.

Although the Suora FX keyboard lacks dedicated media key features for things like pausing, skipping and rewinding tracks, the F9 key through to the F12 can double up and provide this functionality. Furthermore, at least it has some volume controls (which are located at the keyboard’s top right corner). They aren’t as funky as the dial controls you’ll find on the 100 Aimo, but they’re good enough. Sadly, though, it doesn’t give you extra ports for connecting other peripheral devices. But, that’s not all. You also don’t get a wrist rest either with this package. So, if you’re someone that’s looking to use the keyboard as both a productivity tool and for gaming, you’ll have to invest in your own palm-rest when going the Suora route.

The purple optomechanical key switches by Razer are the Huntsman Elite’s star attraction. Under the hood of the keycaps, you’ll find purple switches attached to metal springs with plastic cylinders attached at the back of them. In fact, the cylinder is where the real magic is and, not the actual switch, which is mostly designed for feel. Instead of making electrical connections using mechanical force, the way a traditional mechanical gaming peripheral would do, optomechanical switch devices employ the use of infrared light. When Razer’s optical switches are actuated, rays of light are used to send signals to the Elite’s hardware, which then finally delivers this data to your computer as usual. 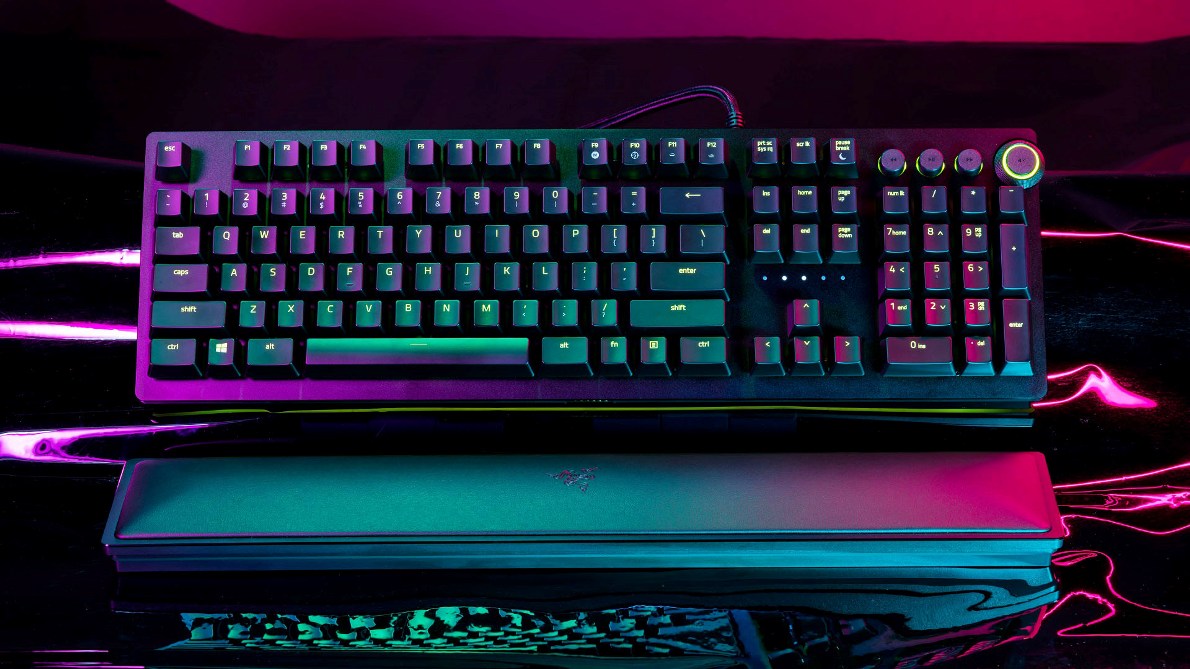 No matter how hard you smash in your regular mechanical switch, it’s most likely not going to hit the speed of 186,00 m/ps, which happens to be the speed of light. But, the keys on the Elite come close.

The RoccatSuora FX keyboard uses TTC switches, which are basically just another clone of the Cherry MX switches just like Greetech, Gateron, Kailh, etc. However, this isn’t saying that’s a bad thing. The keycaps aren’t so different from the stock keycaps you’ll find on today’s standard Cherry MX-based mechanical keyboard. It has a laser-etched legend on its then ABS UV-coated plastic caps and an OEM profile. The keycaps have a sort of floating overall design to them. Although this makes them a lot easier to clean, it may cause a lot more light to bleed. So, the floating aesthetic can be seen to be both a good and a bad thing. 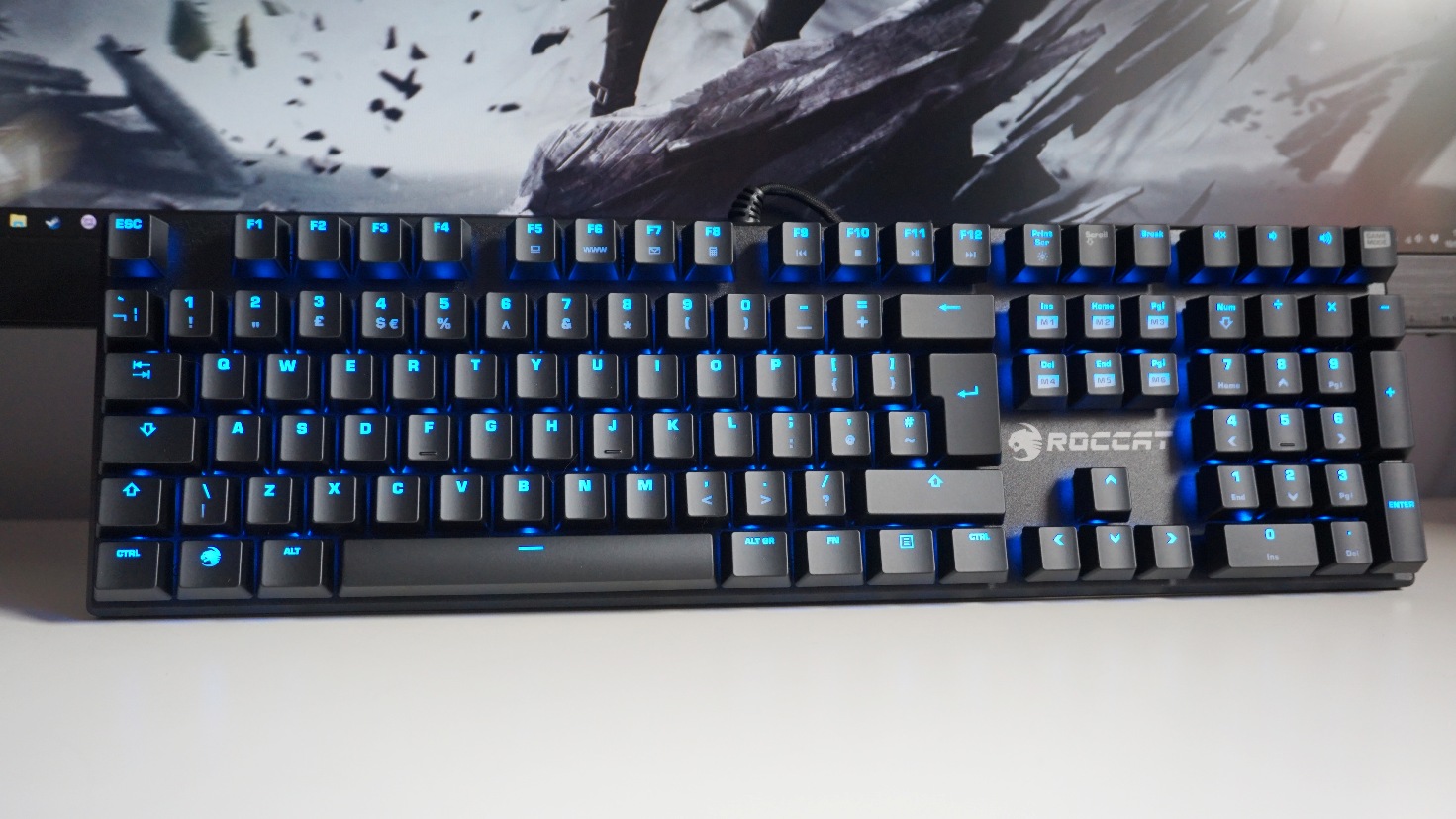 The Sura FX’s keycap fonts don’t have such a “gamey” aesthetic, compared to what you’ll see on other gaming peripherals, and Roccat has seemed to strike a decent balance between making legends and fonts a sufficient size hence allowing for backlighting without making it appear too gaudy. However, the primary legends are all above the secondary ones and they won’t be backlit evenly when the LED feature is on top.

Razer’s Synapse III is the software that powers the Huntsman Elite peripheral. It’s an incredibly gorgeous program that explains to the user what all the screens are designed to do when it’s first run, which is really helpful. The downside to this, however, is that you’ll be forced to go through many screens to get simple things, like reprogramming keys and creating profiles for apps and games, done. Nonetheless, the program functions very well and can be used to customize RGB backlighting and program macros as well as link lighting and performance presets with individual apps and games. 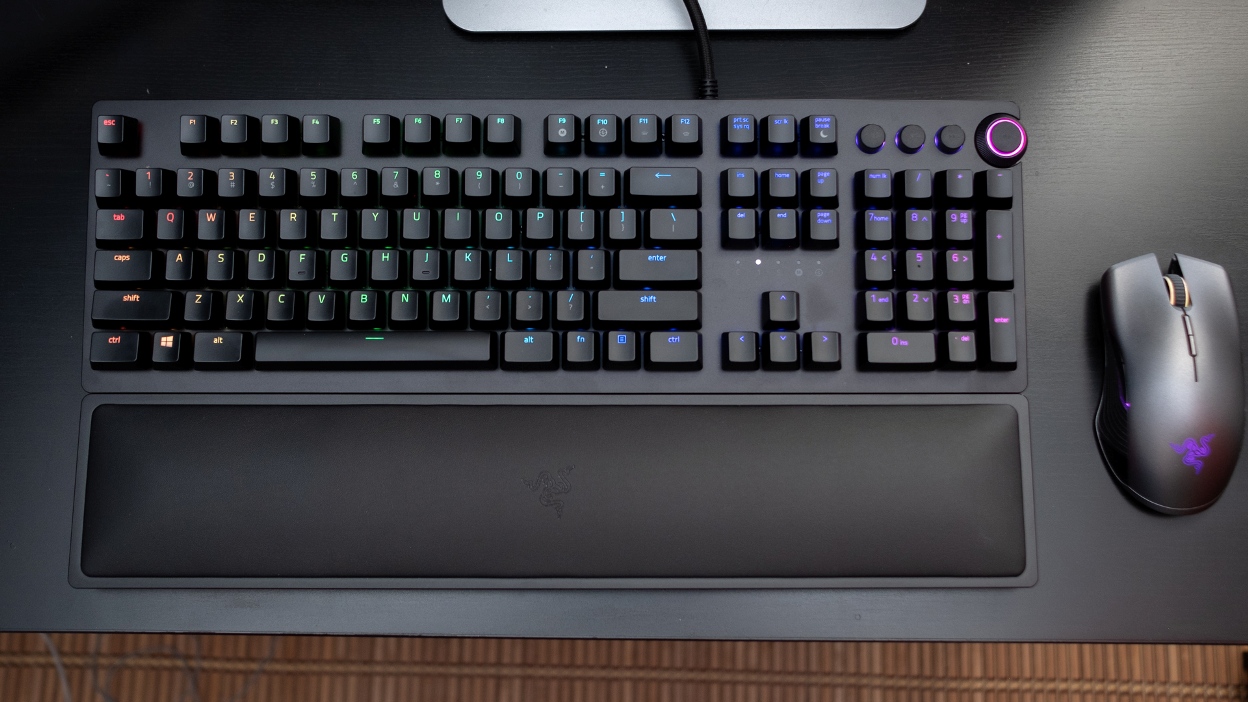 The in-built lighting profiles on the Razer for popular games is a little weird though. Certain games titles, such as Doom, Diablo III and Overwatch, default to customized, intricate lighting presets directly from the developers and/or pros at Razer themselves. Granted, they’re usually delightful and pretty in several unexpected ways, for instance; how the character you pick in Overwatch will determine the color scheme. But, it’s unfortunately very hard to determine which titles have in-built color presets and how to reprogram them, if you’d rather come up with your unique designs.

Get the Swarm software by Roccat and have full control of the RoccatSuora’s general configuration and lighting. This application allows you to set up as much as 5 separate color profiles, designating hues to individual keys. Every key is capable of supporting 16.8-million colors, which means that everyone can find the color that suits them best. Switching between these color profiles can also be done quickly and relatively easily, and they can be assigned to specific apps as well. The F1-F4 keys are what you can use if you want to quickly cycle through lighting presets on the fly.

The Swarm also allows you to reprogram each key on the Suora FX keyboard if that’s something you might want to do. In addition to that, it also gives you the ability to program macros as useful shortcuts. Each key can have both a primary and secondary function, which is activated when the keyboard is on Game Mode. This can be quickly switched off with one simple tap of a button located on the top right The simple, straightforward layout makes the Suora FX so much better.

It’s difficult to tell whether the Huntsman Elite’s optomechanical keyboards perform better than their more traditional mechanical counterparts during gaming. The one thing that’s certain is that they do actually work incredibly well. You can glide across the Overwatch battlefield map as the McCre character, activating special skills as you shoot down your enemies. Those that are familiar with Razer know that they’d rather completely shut down operations before they released a peripheral that didn’t offer its users fantastic in-game experiences. Their Huntsman Elite peripheral is no exception to this.

Mechanical switches are well-known to make for extremely satisfying gaming and typing experiences. And the keys on the Suora FX help strengthen this popular belief. These colorful keys instantly spring back to place as soon as the finger is lifted, and all this without making too much noise either. Okay, this is nowhere near one of the quietest keyboards out there, and it definitely can’t be used in a room where others are sleeping, but it isn’t any louder than most of the other standard mechanical gaming keyboards in the market.

With that said, this firm, sturdy feature feels good whether you’re typing an essay or taking down foes in an online death-match. Each keyboard key is well-spaced and well-sized, so touch-typing won’t be that hard. After just a small amount of time with Roccat peripheral, your fingers will be gliding through the board with ease with rarely having to look down at what you’re doing.

Just like the Roccat Vulcan Aimo 100 that came before the Suora FX peripheral, this device is a well-built and well-designed gaming keyboard that’ll suit all types of gamers. The overall design-style is both slick and tough, performance is dependable and you can customize general functionality and lighting to your precise likings. No doubt, the Suora FX keyboard is a fully customizable and feature-packed board that’ll provide you with strong performances.

But, you can forget about Cherry MX switches or any other of the more traditional mechanical keyboard switches out there, the optomechanical switches by Razer are no doubt one of the fastest switches you can get your hands on right now. Meanwhile, the Huntsman Elite is most likely the closest thing you’ll see to a keyboard that has been perfectly laid out. Of course, it’s not all roses and it’s far fro perfect because it requires you to put in a lot of energy and not having two USB ports isn’t a small inconvenience. Also, Razer might want to slightly improve the wrist rest’s ergonomics.

With that said, you’d rather splurge on the Razer Huntsman Elite rather than many of the several other top-shelf, premium peripherals out there, including the RoccatSuora FX itself.