While gaming headphones that cost around $100 blend attractive designs and good audio quality really well, the headsets that are priced in the range of between $45 to $65 always have something they’ve sacrificed and put on the chopping block. The Razer Kraken, being in the 45 to 65 range is, sadly no exception. The HyperX, on the other hand, provides fantastic audio quality for both music as well as gaming for the price of about 100 bucks. HyperX has built a reputation for providing quality gaming peripherals at very competitive prices, and the Cloud Stinger is one of them. This article will highlight some of their differences and judge which is generally better. 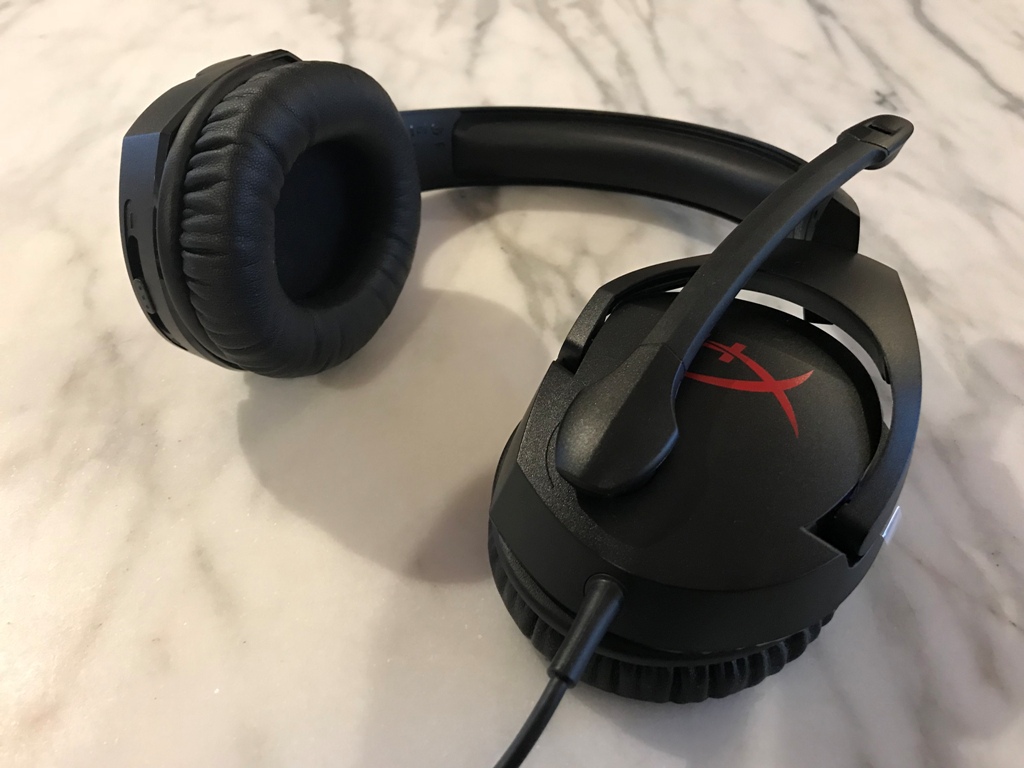 The HyperX Cloud Stinger has a rather conservative overall design. It’s got a black-colored plastic chassis accompanied by a padded headband that has an expandable, notched steel bar beneath it and huge, over-the-ear foam earcups. The right side earcup is where almost everything is; a flexible boom microphone, a charging port and a power button. The left earcup only has the volume dial. Although the microphone isn’t removable or retractable, it does, however, automatically mute itself when pushed upwards, complete with that subtle telltale click. It also has a wireless dongle features that will allow you to plug ii into a PlayStation 4 or PC.

Okay, the truth is, the Cloud Stinger isn’t the most good-looking or eye-catching gaming headset out there, in fact, far from it. However, it has a solid, smart overall appearance that won’t surprise you much. A removable or retractable microphone would’ve been nice, so would a dongle storage space, seeing as that tiny attachment can easily get lost. Another thing that’s a bummer is the fact that it doesn’t have a 3.5mm jack as well. Yes, while it isn’t the only wireless pair of headphones to omit this feature, it still helps in severely limiting the headset’s capability. 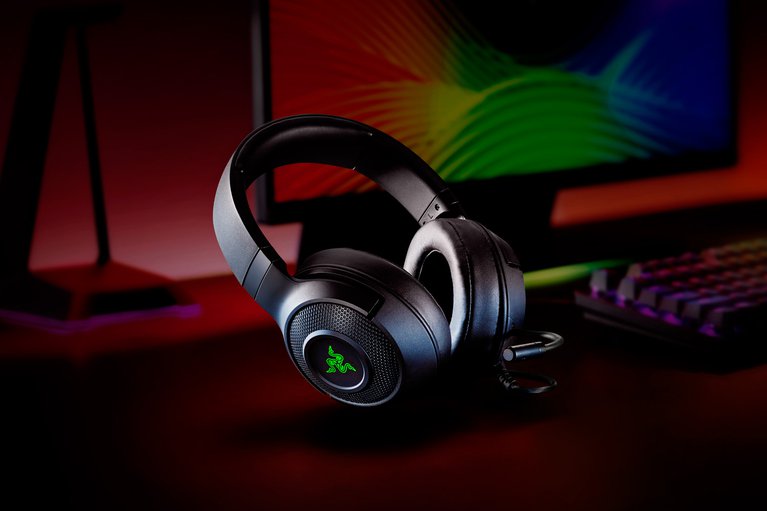 Save for one confusing flaw, the Razer Kraken X is arguably one of the best-looking pair of headphones Razer has come up with. Unlike older Kraken designs and the incredibly bulky ManO’War, the Kraken X headset has a much more traditional look to it, and is a lot less silly as well. The headphones weigh around 8.8 ounces and measure about 7.5 x 6.5 inches. It sports a black-colored chassis that has subtle honeycomb pattern designs and the Razer logo embossed on each earcup. It’s got a padded headband with notches that can be used to customize the fit between both sides. It’s generally all pleasantly elegant and no-nonsense.

A lot of all the headset’s extra features reside on the left-side earcup. Here, you’ll find a volume dial and the microphone-mute button. Both are not too bad, although maybe the volume dial could’ve been a bit higher and slimmer. However, there’s kind of a huge problem that arises in the microphone department.

High-end gaming headsets usually have a retractable or removable microphone. Low-end headphones, on the other hand, often have boom microphones, that can be slid out of the user’s sight when not being used. The Kraken X headset’s microphone is a flexible one that doesn’t fold upward, doesn’t retract and doesn’t come off. Basically, this mic is going to be in the user’s peripheral view whenever they’re using it. This means that it can prove very distracting sometimes if not folded up in a specific conformation. Of all the many potential solutions to the microphone conundrum, Razer seems to have gone for one that just might be the least intuitive of them all.

Though, beyond that, the Razer Kraken X is an incredibly versatile headset. By default, you can connect it to almost anything through its 3.5 audio jack feature. But, the headphones also come with a splitter function for folks that want to separate the audio/microphone inputs for a gaming setup. Its default cable is a little short. The splitter cable, however, is much longer. 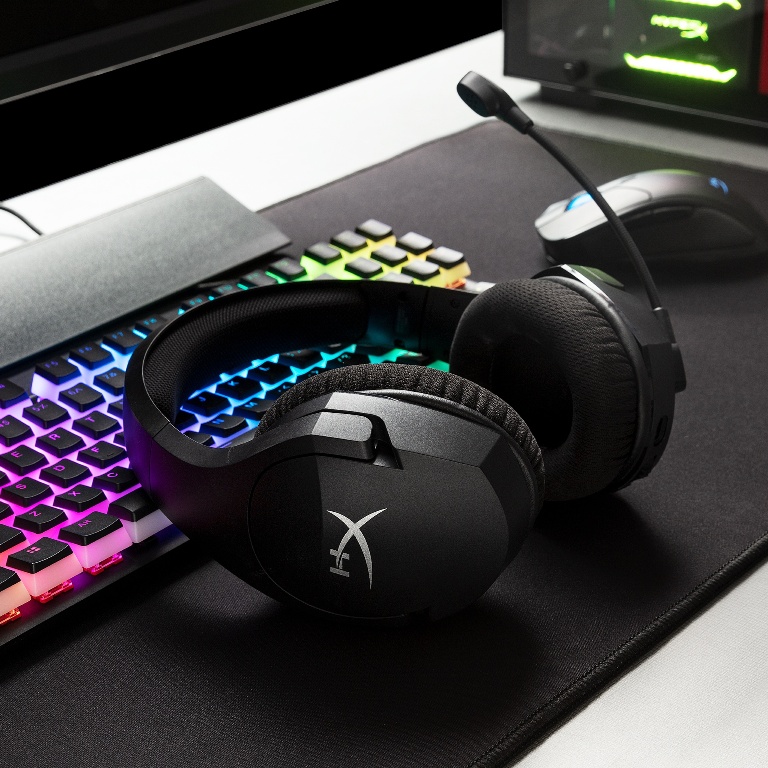 HyperX designed its Cloud Stinger headset primarily for PlayStation 4, which generally means it works best when paired with that system. The headset offers a nuanced and rich sound quality, and it does a wonderful job of balancing sound effects, voice work and music. Whether you’re listening to the riveting back and forth between Spider-Man and Mary Jane or whether you’re destroying enemy combatants in Star Trek, this headset will provide you with both clear and crisp sound. The soundscape might skew a little on the treble sound, however, considering the headset was designed specifically with gaming in mind, that isn’t such a terrible thing.

With that said, the sound quality you get from a PC connection is almost equally the same. It sounds superb when used to play StarCraft: Remastered and Destiny 2. It’s actually very easy on one’s ears and allows the user to concentrate more on what’s happening in the game.

When it comes to music performance, all genres sound robust and well-rounded, from Bob Marley reggae tunes to Coldplay rock tunes. As highlighted earlier, though, the headphones still favor the treble side even when being used to listen to music. Anyway, because it doesn’t have a 3.5mm audio jack feature, you can’t connect it to handheld devices or phones, which means you can’t really replace them with your day-to-day listening device. 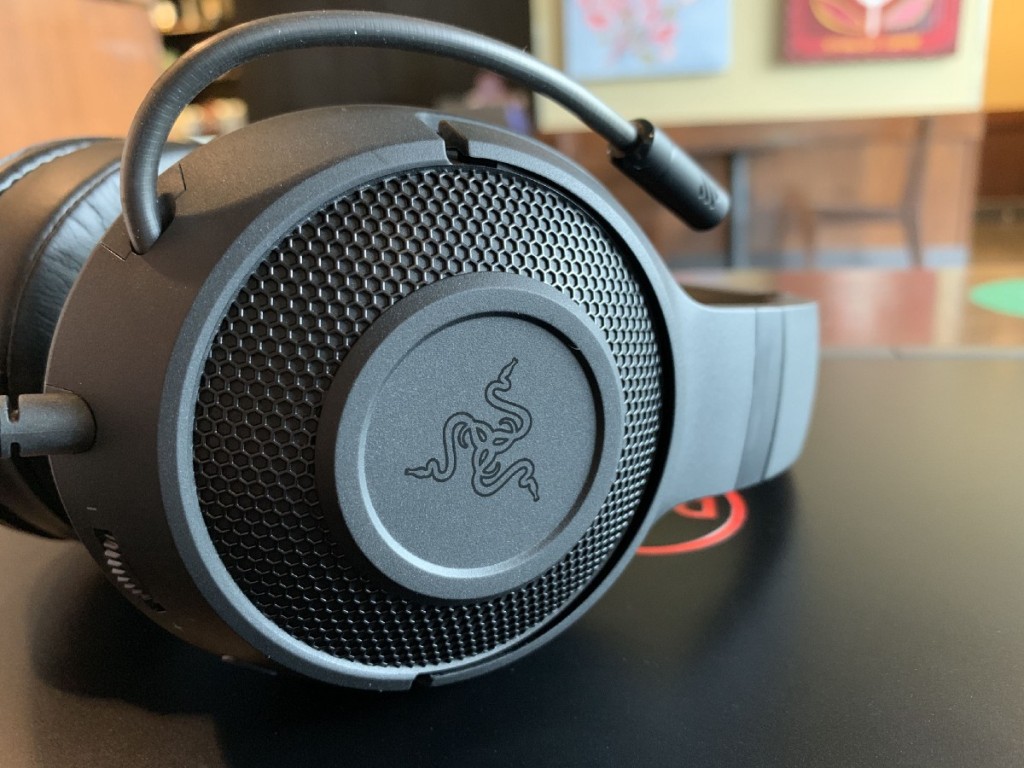 The Razer Kraken X headset is compatible with the Switch, Xbox One, PlayStation 4, PCs and mobile devices (those that have an audio jack feature, anyway), and game titles on all the platforms sound superb. PC games sound exceptionally good. Games like World of WarCraft, Baldur’s Gate (Enhanced Edition), StarCraft: Remastered and Overwatch sound wonderful on this headset. This pair of headphones excel at voice work and vocals, like the in the driving background music in StarCraft and Baldur’s Gate’s engaging character quips. That being said, the headset is kind of a bit light on bass sound, so be warned. Directional sound is very functional, however, gunplay sounds sometimes lacked that oomph.

Likewise, this Razer headset also delivers high-quality audio on mobile devices as well. Whether you’re on Android probing Dragon Quest’s dungeons or exploring the vast forests in Tales of Vesperia, the sound is absolutely amazing. Okay, it isn’t quite as nuanced or as deep as what a more expensive pair headphones would provide you with, however, the Kraken X gaming peripheral can more than take on its competitors such as the Cloud Stinger from HyperX as well as the powerful Roccat Renga Boost.

As far as music is concerned, because its microphone is so obtrusive, you can’t really use these as your day to day music headphones. Anyway, this is not such a bummer considering the fact that the Kraken X really does not play music that well either. So, this is basically kind of a moot point. Furthermore, while gaming will greatly benefit from a focus on the treble sound, music won’t. Yes, vocals come through clearly but bass sound almost doesn’t exist. This especially more so in classical and punk pieces, which is where it’s needed the most. The soundscape in music will come through unbalanced and flat, making every song you listen to sound a bit lifeless. Think twice when getting it for music purposes. 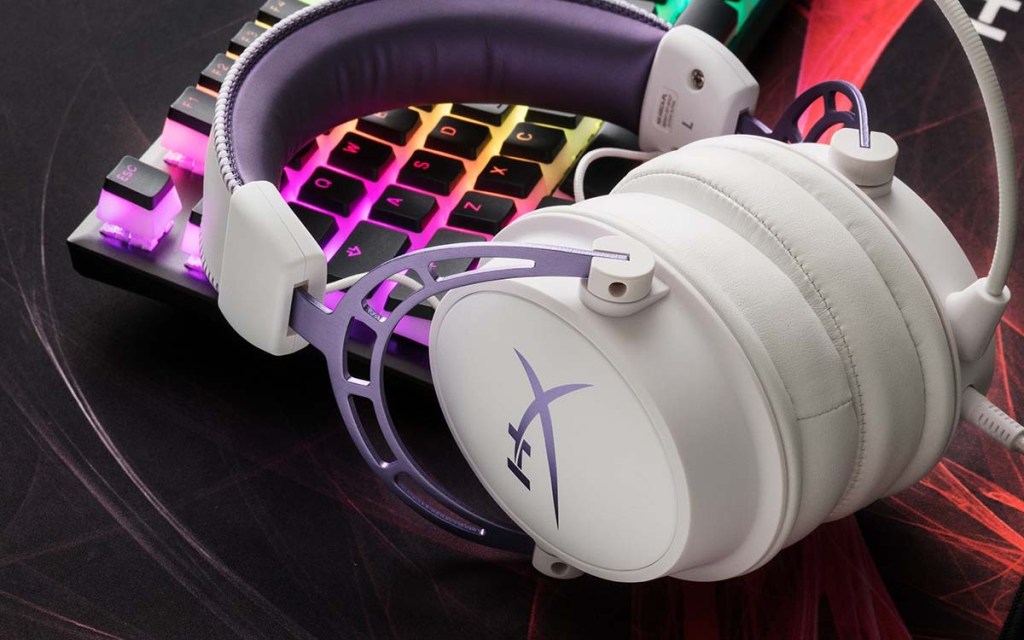 The HyperX Cloud Stinger has excellent close range connectivity, although the sound starts to cut a bit around the 20-foot marker. Granted, most gamers are rarely going to stray even just 10 feet away from their gaming setups. However, some wireless headphones can operate even when 30 feet away from the system it’s being used on, which means that the Cloud Stinger isn’t really the most powerful there is when it comes to wireless connectivity. That being said, it’s still more than sufficient.

The battery on it is supposedly able to give you around 17 to 18 hours of playtime on a single full charge, but this is something very hard to measure. It has an LED indicator right next to the headset’s power button which will display different colors to show you how much power you have left, however, you can’t get exact percentages. You basically drain around 25% of your battery life after using the device for 4 hours, which isn’t far from what HyperX itself has claimed.

The one major downside about the Cloud Stinger is that it doesn’t have customization options. It lacks software to create your own unique profiles, surround sound and equalization level settings. Okay, the default soundscape isn’t bad, however, that’s pretty much all you’ll get. 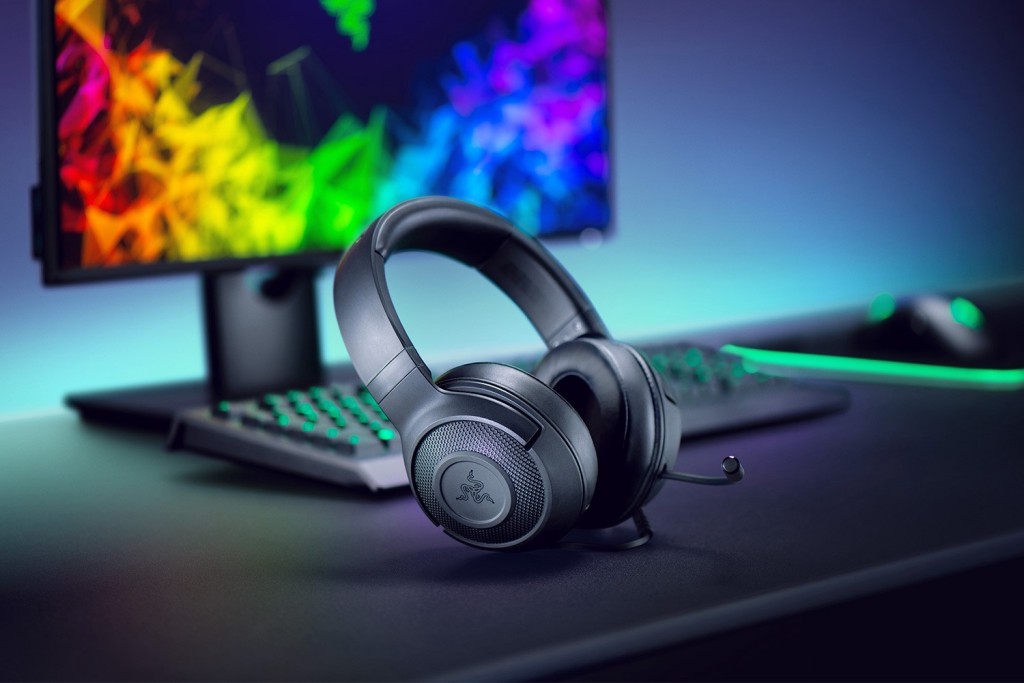 The Razer Kraken X headset, instead of USB, connects through a 3.5mm audio jack cable. This means that there’s really not much software functionality it needs. When you buy a new Razer Kraken product, you immediately get access to Razer’s surround-sound software. This is what you’ll use to initiate the 7.1 digital surround-sound. This particular bit of software is relatively easy to set up, however, it’s a bit of a pain when you have to install the Synapse’s (Razer’s main software product) other separate pieces of software. Additionally, there’s no significant differences between stereo and surround sound performance.

This basically just leaves us with the headset’s microphone, which isn’t that great but passable nonetheless. When used to record vocals, the words come through quite clearly, with very little feedback and fuzz. The microphone is ideal for the casual multiplayer gamer, but that might just be it. You may not want to go beyond that.

The Cloud Stinger by HyperX is no doubt the more feature-rich of the two products, however, it isn’t as widely applicable to many gaming platforms as the Razer Kraken X is. That being said, the Cloud Stinger also contains a useful and super-neat auto-muting function, which is something rare in products that cost this much. So, if you want to get high-end gaming audio for PC, then you should definitely only be looking at the Cloud Stinger.

Although, even though the Kraken X’s unremovable and microphone and subpar music performance makes it hardly perfect, for fifty bucks, it’s actually an incredibly solid headset that provides a very comfortable fit and fantastic in-game sound. It also has an all-round attractive design and is way more restrained that what you’d find on several other Razer gaming headsets.