Razer’s Naga gaming mouse, which focusses a lot on MMO, has always been a fan favorite. The only one major issue the Razer Naga has, in both the original and hex version, is the large number of button functions on the mouse. Having 7, or even 12, thumb buttons may be beneficial in some games but not all of them, neither the Google Chrome program while we’re at it. That being said, we appreciate that the Naga Trinity tries to solve this issue neatly by providing users with 3 distinct side panels; a simple 2-button layout, the circular hex setup and the traditional twelve-button layout. Basically a lot like what you might find with on the popular Razer DeathAdder. 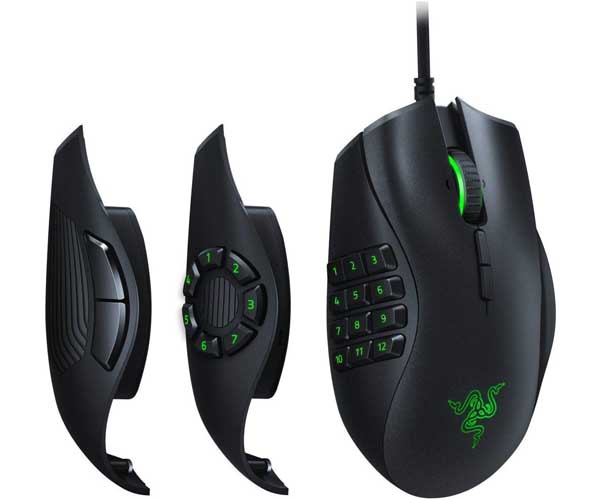 Razer is, essentially, selling you 3 high-end mice products for the price of 1. The Naga mouse doesn’t come cheap, however, it tries to justify this high cost with tremendous customizability accompanied by part-swapping functionality that couldn’t have been more intuitive and sweeter than it is now. If you’re a fan of MMOs but still require something a little more traditional for your RPGs, RTS and FPS gaming, or just simply to get some work done, the Razer Naga Trinity is definitely for you.

It’s difficult to ignore the somewhat religious implications behind the Trinity’s name since it also has 3 distinct entities blended into 1 body. The thumb panel can be swapped out at will, thanks to fairly powerful and well-positioned magnets. It doesn’t take a lot force to pop the panel off, however, unless you’re specifically trying to get it off, or when the mouse accidentally drops, the Trinity Naga’s left side will not be going anywhere. 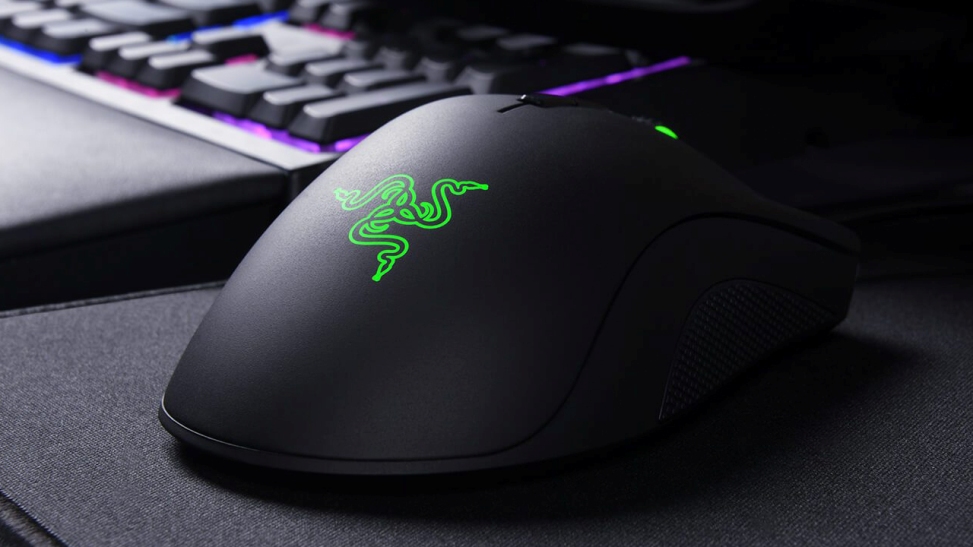 The twelve-button setup, out of the three, is the most straightforward. The simple setup has 2 curved button functions as well as a big, ridged thumb rest below them and the hex layout contains 7 button features surrounding a centrally-placed, ridged thumb rest. The Trinity can even be used without a side-panel too. However, you probably should not do this because your thumb will end up resting on exposed metal. That being said, these swappable side panels work beautifully and they’ve helped successfully turn the Trinity Naga device from a one-hit-wonder, genre-specific product into a versatile gaming mouse powerhouse.

The rest of its overall appearance is similar to the designs you’ll find on previous Nagas. It’s a big, wide gaming mouse that has a high-profile and a fourth finger rest. There’s a right and left button as well as a scroll wheel feature that can click 3-ways with 2 DPI sensitivity-adjustment buttons underneath the wheel. If you’d like you’re gaming mouse to be a little more on the sleek and small side, then the Naga Trinity might not be for you. However, if you’re looking for something that has many button functions, then trading size for that shouldn’t be a bad trade-off, no?

The most distinctive, most important feature on the Naga Trinity gaming mouse is the swappable side panels functionality. However, there’s really not much about to write about. They simple work outstandingly and successfully manages to make the Trinity Naga a powerhouse in the gaming mouse world. Aside from that, the Trinity mouse works well with Razer’s Synapse III software. Yes, this program is still in a beta state, however, it keeps looking better and better as time passes. The Synapse III will allow you to adjust DPI settings (between around 100 and 16,000), customize RGB backlighting, create profiles for individual apps/games, reprogram buttons as well as tinker with many other technical settings.

The Trinity also has a very polished interface in the Razer Synapse software. Side panels can be swapped out at any time, not just in-between gameplay, and the Synapse will recognize which panel has been connected instantly. Buttons can be programmed in either pictorial or list form. Macros can also be created, which is incredibly useful when using the mouse for MMOs.

Oh, and there’s one other feature on the Razer Synapse program not many people will expect to see. However, it makes a lot of sense. In fact, you’ll even be surprised you’ve never noticed it before. Inside the Performance tab, you’ll find a link that’ll allow you access the Mouse Properties menu which is found in Windows. Considering how much the default Windows options can allow you to customize the mouse, it’s a bit shocking that Razer looks like the first-ever company to consider integrating this kind of functionality into a software it’s created itself. Sometimes the most innovative functions or features are the ones you did not know you required until you spot them.

When you use the Naga Trinity mouse to play World of Warcraft, expect to get excellent results, which shouldn’t be much of a surprise really, considering the previous Naga mice were perfect for MMOs too. It’s easy and very simple to manipulate and use all of thePandaren Rogue’s special abilities, especially once you’ve memorized all of the twelve buttons that sit on the Trinity’s side panel. Furthermore, the fact that you can also create macros is a very nice addition and is most welcomed. 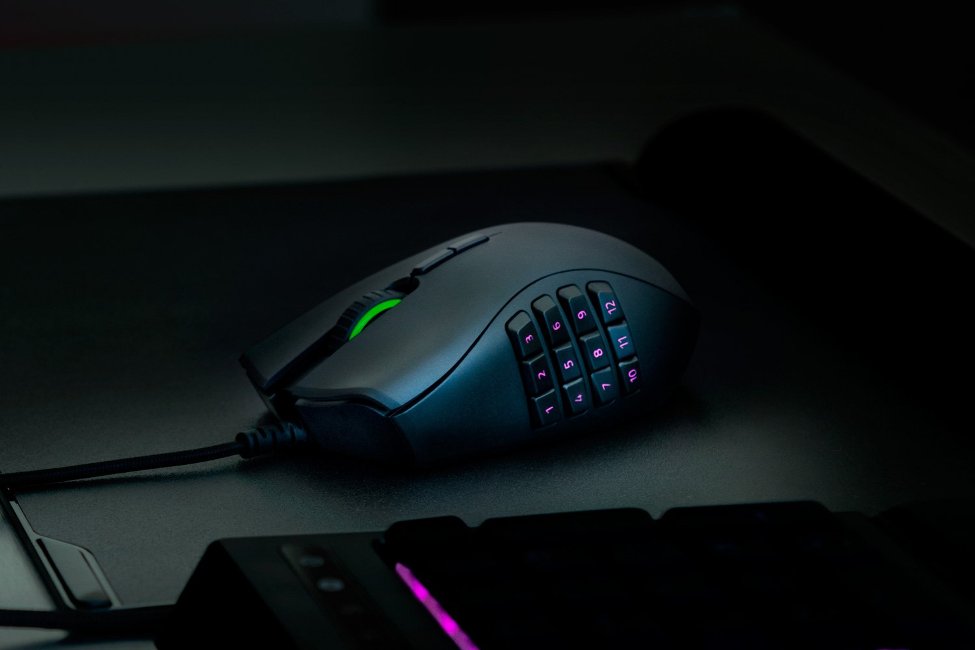 Anyway, while there’s a lot one can do to change the extra buttons on the Naga Trinity, users aren’t allowed to do anything to change its overall profile. That being said, it’s really good at doing everything else. The hex layout will allow you to control small units in SpellForce III and StarCraft: Remastered with ease. The 2-button layout works exceptionally in games like Life Is Strange. The gaming mouse’s huge, comfortable overall design will allow you to get almost anything done, whether it’s work or gaming-related.

The Naga Trinity gaming mouse isn’t the first one of its kind. Roccat’sNyth, having been pulling off the same ‘customizable MMO gaming mouse’ trick for quite some time now, have managed to do a fantastic job thus far. The Nyth’s customization options are subtler, and also the option to switch out the right-part of the device, depending on the type of finger support you’re looking for. Furthermore, you get a free case with the Nyth to store all the extra parts. 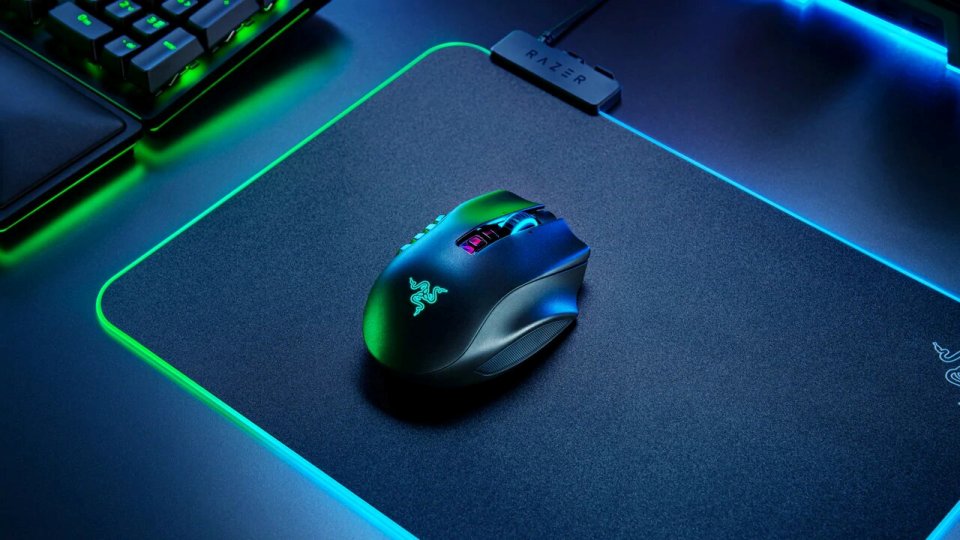 However, when you look at it holistically, the Naga Trinity mouse is just a tad bit more polished and refined. It has effortless panel swapping, easy to control software and the one-hundred US dollar price tag is not too bad. The Trinity keeps the best aspects its Naga predecessors have, while making the addition of that much-needed shot of versatility. For MMO gamers that aren’t too attached to that particular genre, it’s hard to recommend something that’ll give you a better mix of customizability and functionality.

There’s not a lot of maintenance required to keep the Naga Trinity running at optimum levels. Once a month, unplug your mouse from your USB port and proceed with cleaning lens located under the gaming mouse using a cotton swab or soft, dry cloth. Use a bit of warm water but don’t use any harsh cleaning agents or soap.

In the Razer Support center, search for the Razer Naga Trinity device or navigate the product list to locate the device. Get on the product page and click on the Software and Drivers tab found on the left. Download the software or the driver that’s compatible with the operating system being ran.

To access the Razer Hypershift feature, long press the button that’s been programmed and then click the other button that has the secondary command. A few of the controls and commands that can be programmed to the mouse include; macros, sensitivity, mouse function, keyboard function, Default, and so on.