The SteelSeries Arctis line is one of the best gaming headset brand and have been top quality since the first one was released. The Arctis 7 is a very versatile headset, kind of similar to the Arctis 1 in that respect. However, the important differences that count are that the Arctis 1 lacks that premium audio quality and comfortable elastic headband on the Arctic 7, which makes the 7 model a better investment for both PC and PlayStation. 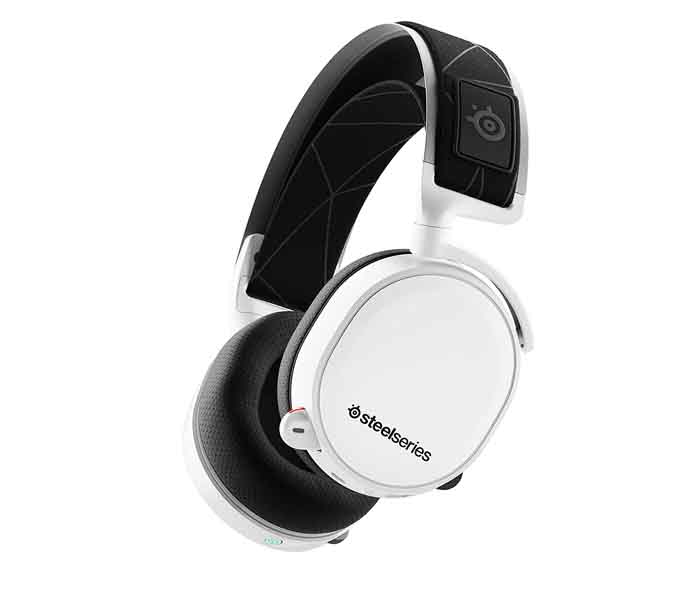 If you’re willing to break the bank a little for a premium wireless gaming headphone, then you should get one that sounds great, obviously, however, it should be comfortable as well, compatible to multiple other devices and, lastly, look stylish. The Arctis 7 touches all these points, performs wonderfully and comes at quite an affordable price. While they’ll be a few annoying things you’ll have to work around to ensure you’re using it to its full potential, the Arctis 7 is showing headsets what you’re meant to be; versatile, functional and practical.

The Arctis 7 and Arctis 5 have an almost identical appearance. The headset is sophisticated and sleek, with a streamlined, elegant design and a foolproof adjustable headband. Instead of having to fiddle about with rigid extendable rods, to ensure it comforts to your head’s shape and size all you need to do is adjust the flexible headband and the two Velcro straps. You can get the headset in in either a white or black color scheme, and there’s really nothing in particular that draws you to it. You could have them on in the bus on your way to work and easily not get a second glance. Also, while the Arctis 7 headphone a little bigger than your standard headphone set, SteelSeries still managed to ensure it’s still compact and small enough to comfortably fit into any bag. The ear cups can even be rotated to make it lie flat. 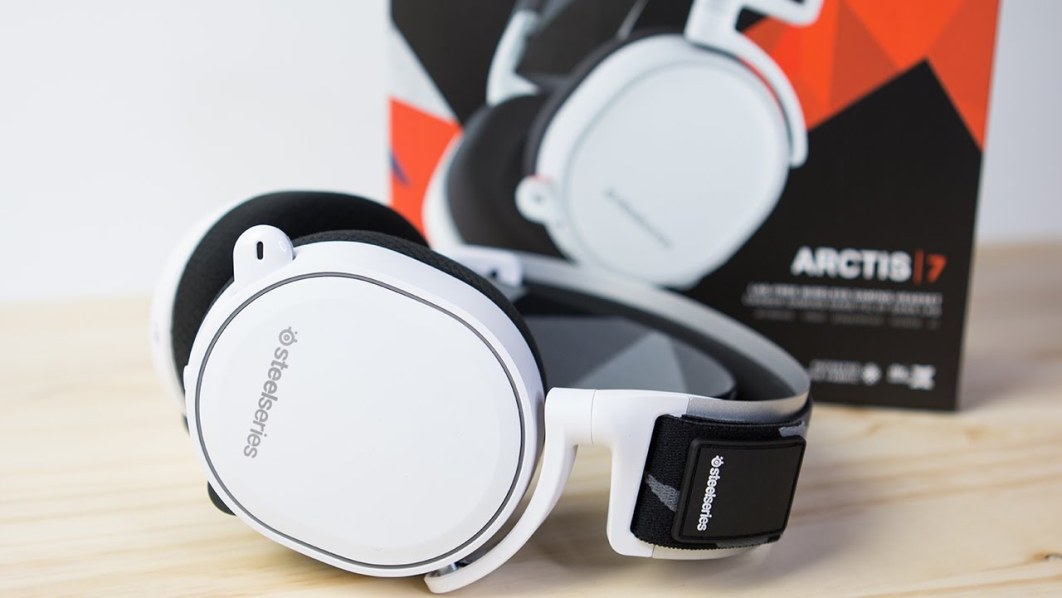 On the right ear cup, there’s a chat volume slider and power button. On the left one, you’ll find a regular volume slider. A 3.5mm audio jack feature for mobile listening and a micro-USB port. Although the headphones will need power for surround-sound and wireless functionality, the audio jack function allows you to listen to anything you’d like, whether there’s power in the device or not.

As mentioned earlier, the headphone’s elastic headband makes it easier to find the perfect fit for your head. In fact, it’s surprising why the major headphone manufacturers, except SteelSeries of course, haven’t started embracing this approach. This technique has consistently proven to produce way more comfortable and reliable results when compared to extending two incredibly fickle notched rods. The headset ear cups create a tight seal around the ears, however, they don’t push down too hard even though they do this. That being said, they still kind of bounce around the head a little when you walk with them, meaning that they can sometimes prove a bit frustrating when you have them on while you’re out and about.

When it comes to gaming options, the Arctis 7 provides some stellar ones, if you’re done to go the extra mile though. With both 7.1 DTS surround and stereo sound, alongside a plethora of many other equalization options, the headset can provide you with many different configurations, whether you want to use for your Skype call or to listen to audio or music files. Basically, it’s pretty simple setting up individual game profiles. The SteelSeries’ Engine 3 software will allow you to play around with the equalization and surround-sound settings, which will then allow you to create your own profiles and then link these said profiles to individual apps, programs and games. 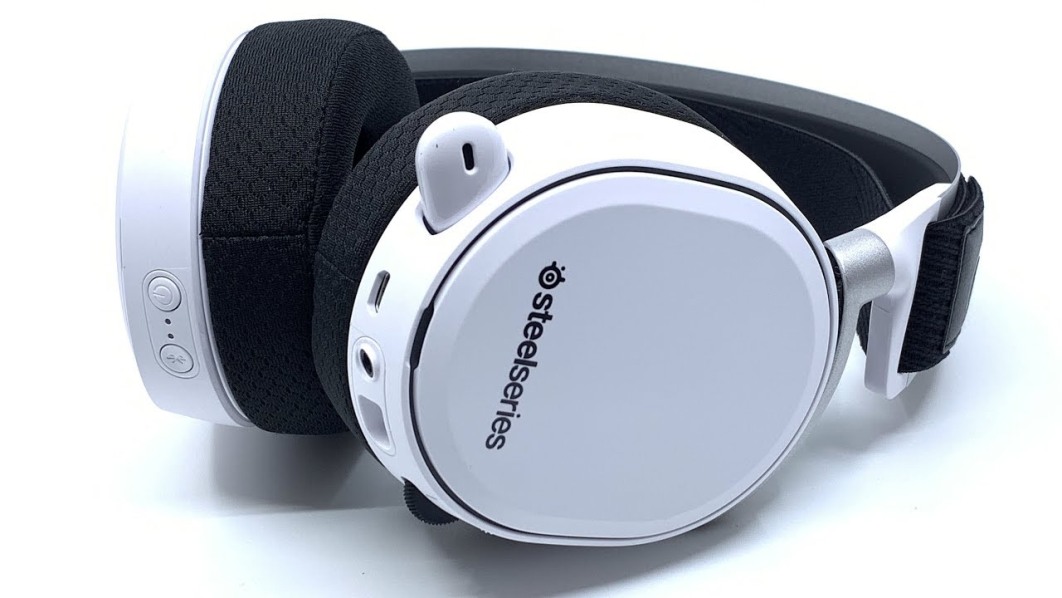 If you use them to play games like the Witcher, Overwatch, StarCraft, Tomb Raider and generally all of the popular titles currently available, everything will sound just fine with the Stereo Audio’s Flat equalization option. Geralt’s battle cries when he’s just taken down a huge swamp monster to Lara Croft’s cinematic cuts sound really good. However, you can take things to a whole other level if you tweak the headphones a bit. Surround-sound in titles like Overwatch or Rainbow Six will make your teammates’ cries and enemy’s footsteps sound much more urgent and immediate. The immersion setting, on the other hand, in the Witcher 3 title provides clean balances in swordplay, dialogue and the pounding gales in stormy seas.

As far as using them to listen to music is concerned, the Arctis 7 really doesn’t perform so well in this particular department, especially when compared to how well they do in the gaming one. They still provide a keen balance among bass instruments, treble instruments and vocals, but it could do better. The stereo will suffice for rock and punk music while the surround-sound kind of makes choral pieces of content sound like they were being played in a cathedral. Unfortunately, every new track you open will require some tweaking around using the Engine 3 software to get the right balance of equalization and surround-sound options for all the individual music genres. Both the stereo and surround sound modes have a Music preset feature which both sound pretty good.

For starters, if you didn’t know already, the Arctis 7 device is a wireless headphone. You simply need to attach a wireless amp to a USB port and then pair that said amp with the headphones and away you go. It has crystal clear wireless functionality, which works from up to around thirty feet out. Again, the Engine 3, a well-designed, intuitive and clean piece of tech is what powers the Arctis 7 headset. This software is what almost all modern SteelSeries peripherals use. In addition to allowing you to come up with different sound profiles, the software isn’t too complicated and is just right for this particular device. Unlike the 5 model, the 7 doesn’t have any colored RGB light features on its ear cups. Most people feel this was a negligible loss, seeing as how users can’t see these light features on their own headphones anyway. 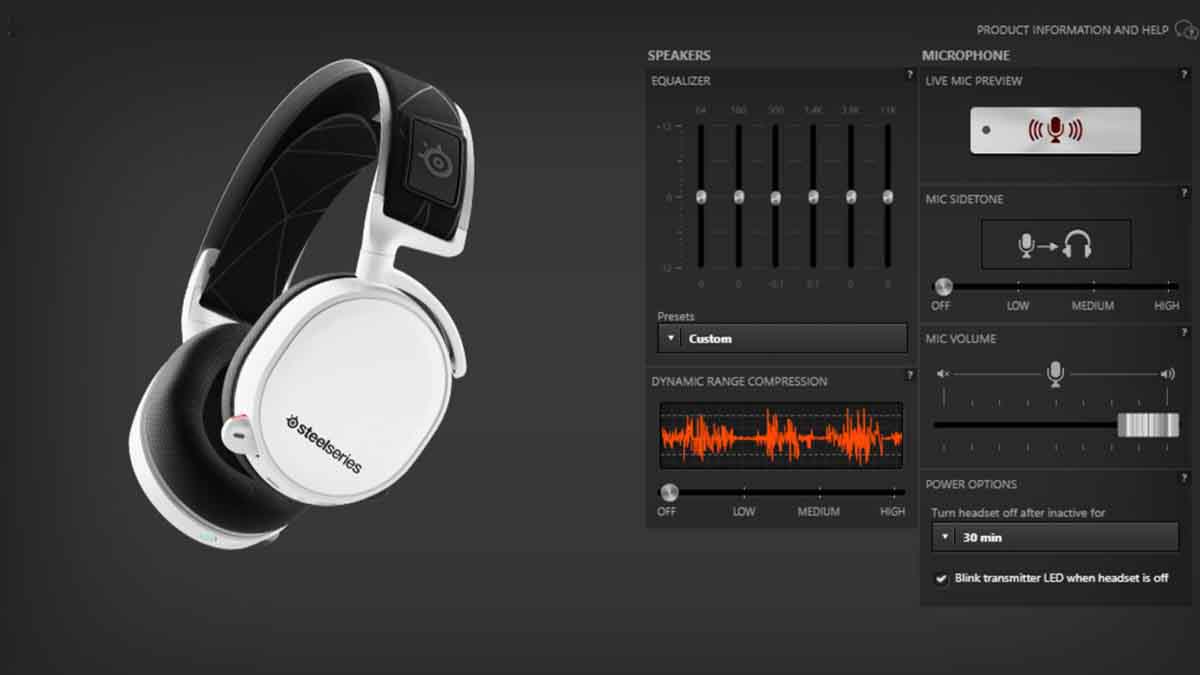 The headset’s wireless capabilities can also be leveraged for a speaker or phone, although it can be a bit convoluted doing so. If you’ve got your own sound cord, you can connect a smartphone to the amp, or amp to speaker. While this may not be as convenient as Bluetooth connectivity, it does mean that wireless audio can be streamed both to and from many other things than just a headset and computer. Keep in mind, this is something you rarely get with headsets in this price range.

The Arctis 7 headphones also has a flexible, retractable microphone attached to the left ear cup. Just like with the one on its Arctis 5 counterpart, the mic on the 7 model is a high-end device that captures all sounds in subtle and clear patterns. That being said, you may not want to use it to record a podcast or something like that, however, it’s more than enough for streaming on Twitch and competitive gaming.

Considering you can end up paying a fortune for good quality wireless headsets, and the PC-centric options tend to not have some very important things such as 3.5mm audio jack features, it’s nice that the Wireless Arctis 7 headset offers users a complete package for only around fifty US dollars or so more. While you might need to go the extra mile to fully unleash all of its potential, nothing is too hard to do and everything it’s supposed to do it does accurately. Throw in exceptional sound into the mix, okay more for games than music, and you have something that’s very hard to resist. There are not many headsets out there that are perfect, but this one really is close to one.

How do you connect the Arctis 7 to the PC?

Attach the Wireless USB Transmitter to the PC or the PlayStation’s USB port. Once you’ve done this, press the power button for around three seconds or so and your headset will be automatically connected.

Does the Arctis 7 headset have microphone monitoring?

Yes, the SteelSeries Arctis 7 headset does have microphone monitoring. The feature has been labelled ‘Sidetone’. It can be adjusted and customized through the Engine 3

Do the Arctis 7 headsets have noise cancelling capability?

When it comes to wireless headsets that have noise cancelling functionality, the SteelSeries Arctis 7 is one of the best there is at this out there. The noise-cancelling, they offer the user is top-notch and is something SteelSeries are proud of as well.