Mechanical gaming keyboards are currently the most sort after gaming peripherals. Volume programmers and hardcore PC gamers are slowly moving away from membrane switch keyboards and towards their more clicky counterparts. In fact, today there’s so much to choose from it can all get a little bit confusing. Fortunately for you, we’re here to help make the decision process slightly easier. In this article, you’re going to find a review of two of the most popular gaming keyboard products on the market. We’re going to be taking a closer look at the K95 RGB Platinum from Corsair and Huntsman Elite from Razer.

It’s believed that nothing on this planet of ours travels faster than light. You know this, no? Anyway, guess what? Light is what powers and drives the novel optomechanical key switches on the Huntsman Elite gaming board. Razer has manufactured in-house a new type of key switch and the Huntsman Elite is one of their first keyboards to use these said key types. Not only are these relatively new switches extremely comfortable but Razer claims that they’ll still be very popular even ten years from this very moment. There’s a lot these key switches have to offer and apparently Razer has just gotten started with them.

The K95 XT by Corsair is a wonderfully versatile keyboard product that gives good gaming and typing experiences. The software that drives it allows the user to reprogram all the board’s keys (inclusive of the six macros key functions), and change RGB lighting settings. It has a sturdy and strong overall build with a comfortable palm rest. The key’s double-shot PBT features are not only durable but they feel incredibly comfortable under one’s fingers as well. The above-average tactile responses they emit help the user avoid typos. Unfortunately, there are two operating systems it doesn’t incorporate fully, which is Linux and MacOS.

The Huntsman Elite looks sort of like what the offspring of a membrane keyboard and mechanical keyboard would look like. In fact, it greatly resembles its Ornata cousin, a keyboard also by Razer, which is a mechanical/membrane hybrid. It has an aluminum-based chassis with keys on it that have been slightly raised. This elevation of its keys gives the board a distinctive, sophisticated and futuristic overall look. It’s a keyboard that happens to be very pleasing to the eye with a design-style that’s generally understated but still manages to be as striking as what you’d expect from a product on the Razer roster. It’ll gel in well both in gaming as well as office setups, which, as we all know, isn’t something easy for most gaming boards out there. 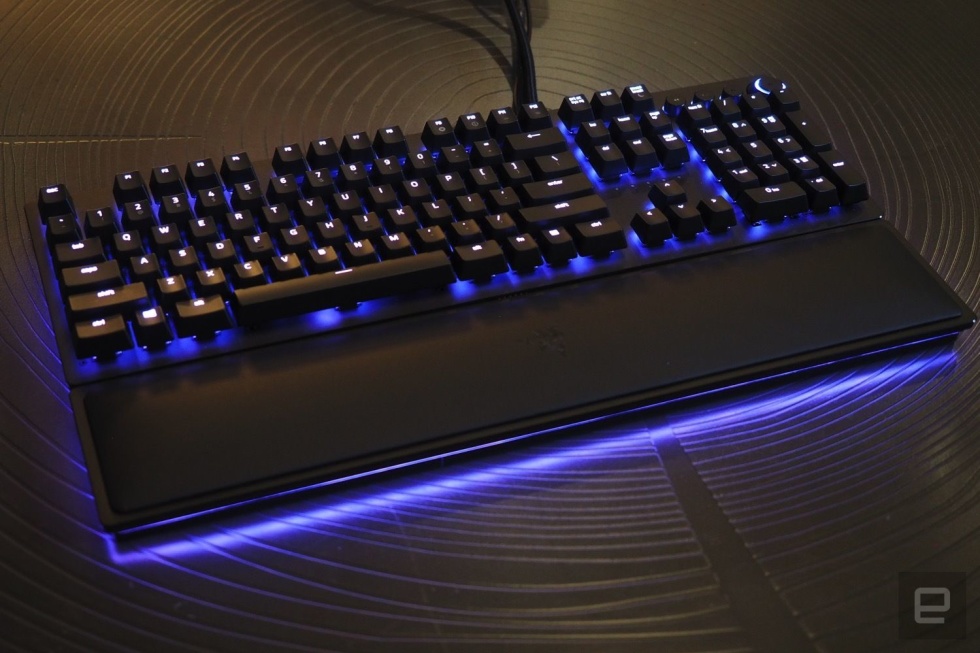 Why the Huntsman Elite beats most of its many other Razer keyboard counterparts on the market is because it features discrete media key functions. It has these good-looking, circular buttons on it that you can use to rewind/forward and play/pause audio files. Its ridged dial is what you’ll use to control volume, however, it also doubles up as a feature that can control backlighting. Discrete media key features are something the modern-gamer just can’t live without these days and if a keyboard is looking to compete with the other premium options out there, then it’s something they can’t afford to omit. Truth is, it’s something Razer never used to include but, fortunately, they’ve finally decided to join the discrete key bandwagon. You’ll also get a nice sized, magnetic palm-rest when you go the Elite route.

The K95 Platinum XT has an almost identical look to its predecessor the K95, which is also by Corsair. It’s one of the big gaming keyboards measuring in at 18.3×6.7×1.4 inches with a black-colored chassis made out of aluminum and plastic. All the standard keys are there on the Corsair K95; media keys at the top right, a few programmable keys and function keys. All the caps on the function keys are textured and have G1 through to G6 embossed on them to indicate to the user that they can be used during gameplay. But, there are S1 through to S6 keycaps in the package for those of you that might want the buttons for streaming. 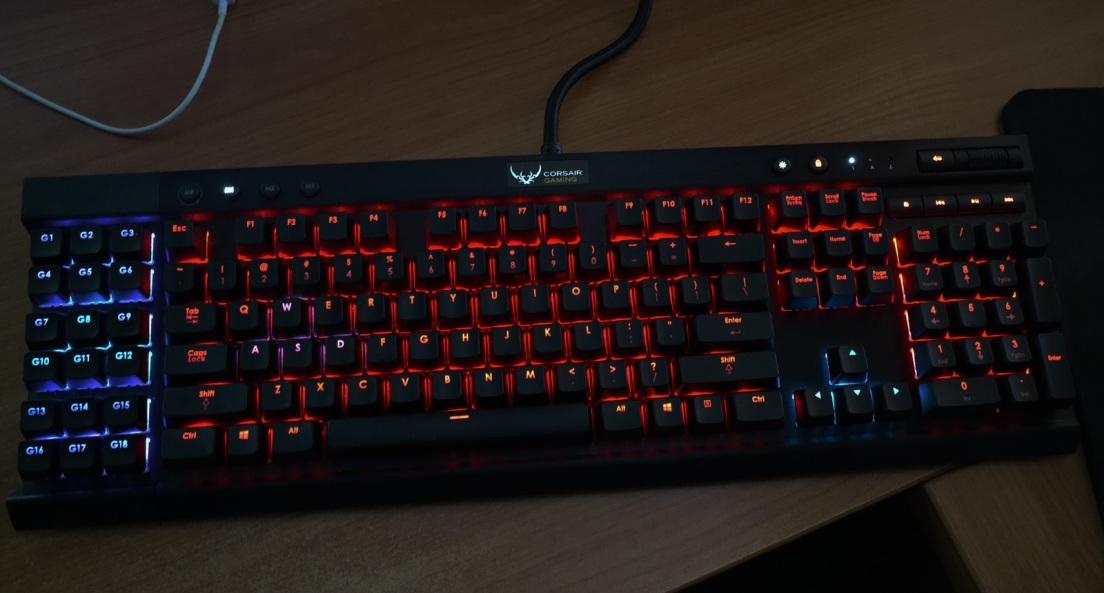 The discrete media functionality is probably the keyboard’s greatest highlight. You simply just can’t do without them these days. Its overall design profile is one that’s functional yet incredibly stylish. It’s LED strip feature located at the top helps give the board that extra flair. The foam palm-rest that comes in the package is way better and much comfier than what you get with the original Corsair K95 that comes before it. Anyway, the K95 XT’s major disadvantage is its extra row of keys which makes it a little harder to center the hands.

Razer’s purple optomechanical keys are without a doubt the main highlight of the Huntsman Elite keyboard. When you take off the keycaps, what you’ll see are purple switches that have been connected to metal springs which also have plastic cylinders behind them. The plastic cylinders are where all the magic’s at. The actual switch itself is basically designed mostly for feel. Rather than using mechanical force to make the electrical connections, like what you’d get from your standard mechanical gaming board, Razer’s purple optomechanical switch products make these connections happen via infrared-light. Cool no? When you actuate the Huntsman’s optical switches, signals are then transferred through rays of light. This is how these signals gets to the hardware and then finally to the computer itself. The key switches on the Elite actually transfer data almost at 186,000 m/ps, which is how fast light travels. 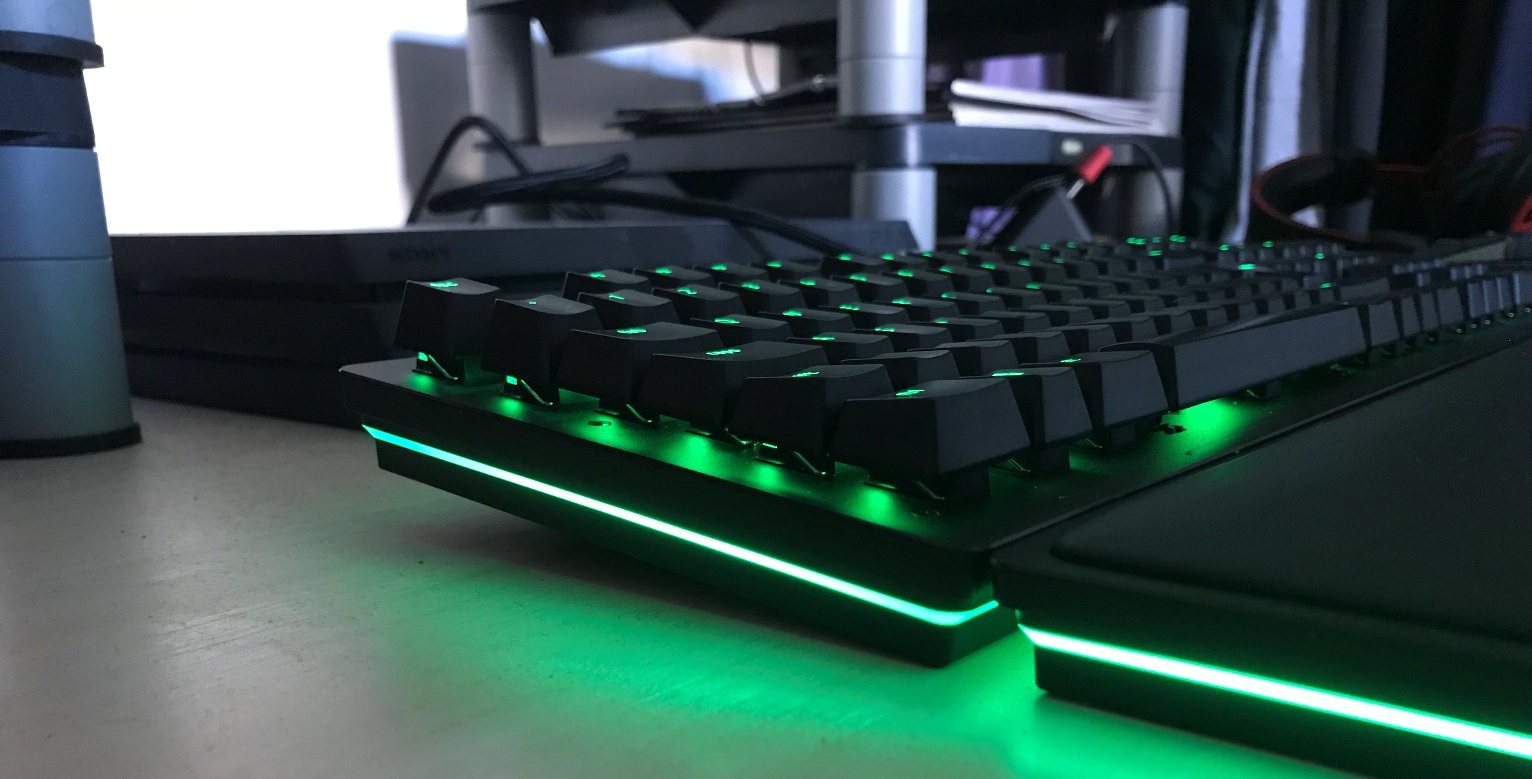 Most people go for Corsair keyboard products because they know they’ll be getting a device that uses the famed Cherry MX switches. Yes, the average priced mechanical switches on the market are improving day by day, they’re still not a match comfort-wise and efficiency-wise as the Cherry MX mechanicals. The Corsair K95 Platinum is available to the world in Cherry MX Blue switches (tactile, clicky), Cherry MX Brown switches (tactile, ) and Cherry MX Speed switches (linear, quiet). 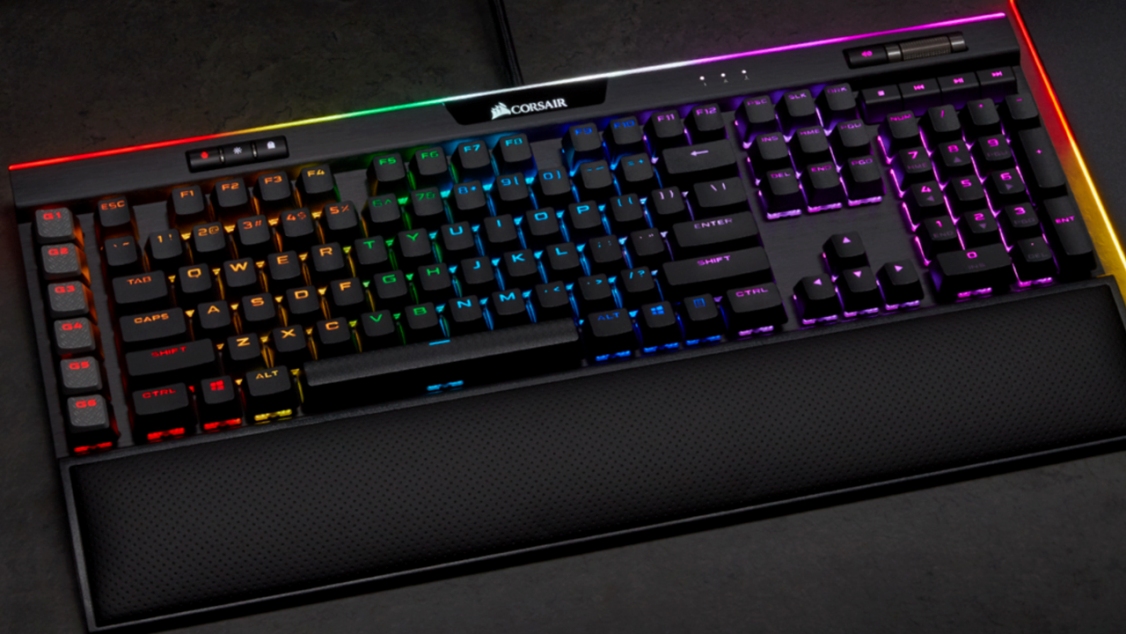 The Synapse 3, Razer’s proprietary software, is what the company uses to drive its Huntsman Elite gaming keyboard. It’s an absolutely fantastic software product that’ll explain to you what the display screens are for when you first start using it. As much as how helpful this is, it has some downsides. The main one is that you’ll need to look at several display screens before you can get simple things such as programming profiles and keys, done. That being said, the software performs well enough and you can use it to change RGB lighting settings, create macro key functions and so and so forth. 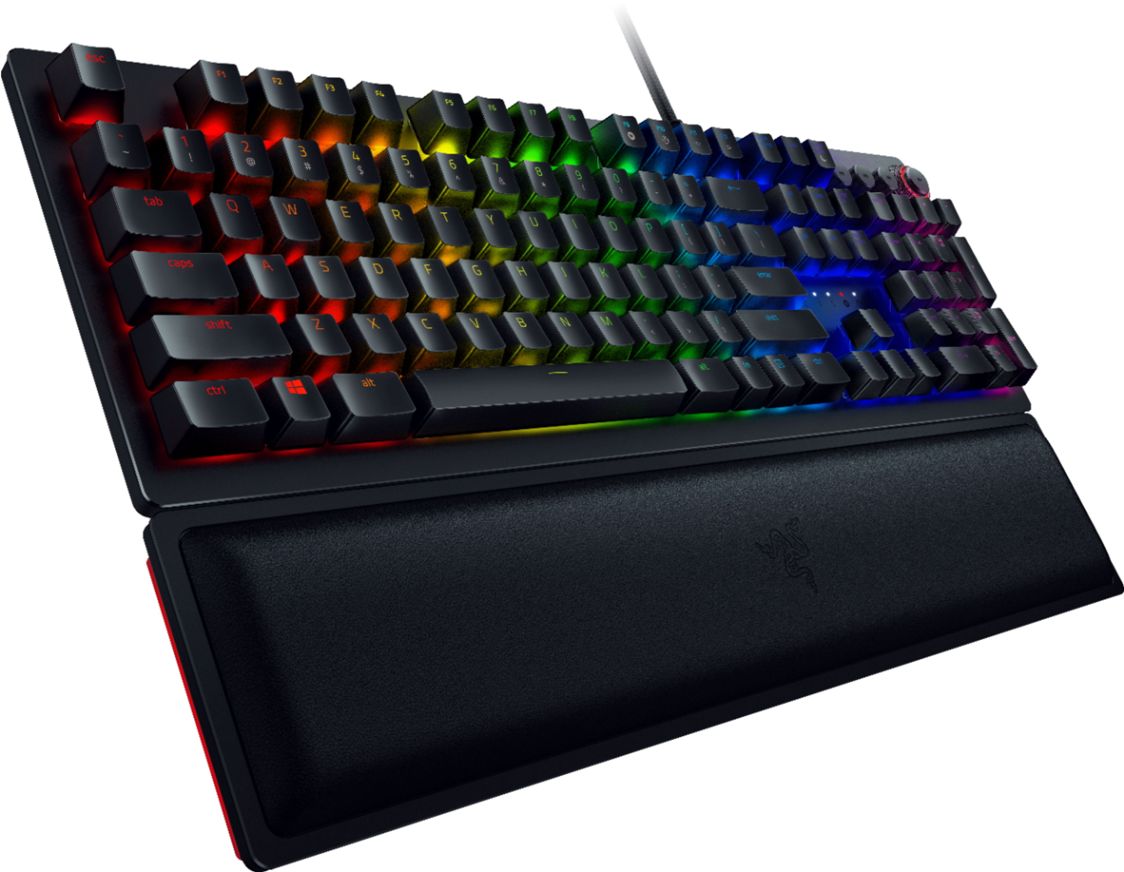 Razer is known to have built-in illumination profiles for certain popular game titles. Certain titles, the likes of Diablo 3, Overwatch and Doom, default to the on-board customized backlighting profiles that have been installed by Razer themselves. Yes, they’re often delightful and gorgeous in their own unique ways like how the color scheme in Overwatch is determined by the character the user selects. However, it’s pretty difficult to figure out which games will trigger the in-built lighting profiles. Furthermore, it’s also very hard to reprogram these said profiles if you’re the type that wants to use your own.

The Corsair keyboard is driven by the Utility Engine. This is Corsair’s in-house software also commonly referred to as the iCUE. There’s really nothing new going on with it. It is still really complicated yet heavily robust. This software helps you change the board’s illumination settings, attach backlighting profiles to particular apps and games, disable button functions when gaming and restructure all the key functions on the keyboard. This gaming peripheral also comes with 5 in-built profiles, 2 more than was found on the original K95 before it, however, you can still store an indefinite amount of presets.

Creating backlighting presets can sometimes prove a pain but at least some of the onboard designs it has are really beautiful. In fact, most of these designs you’ll never find on on other RGB mechanical keyboard products. Corsair is the cream of the crop when it comes to color scheme profiles. The K95 XT is no exception. Additionally, it allows for you to come up with Elgato Stream Deck command functions and then place them in those six extra function keys it provides. When you fully understand how the Utility Engine works, you’ll be able to know how to switch through post tweets and GIFs as well as to launch programs via the 6 function keys.

It’s a little bit hard to definitively tell whether the purple optomechanical key switches are actually better than the standard, run-of-the-mill mechanical key switch, especially as far as gameplay is concerned. Although, the one thing that can’t be argued over is whether they perform well. In fact, they work incredibly well. Traveling across Overwatch’s big maps as McCre has never been easier. Those of you that know Razer keyboard products very well know that Razer would rather the company die than let it give their customers below-average in-game experiences. They were not going to start with the Huntsman Elite.

The K95 Platinum XT is going to give you outstanding gaming experiences. You’ll be able to run titles like World of Warcraft, For Honor, Tomb Raider and Overwatch without a problem. If you’re a massive multiplayer online gamer, then the six extra keys will certainly be very advantageous to you, especially for those of you that end up using them for skill rotations and the like. If you go the Corsair rout, you can be sure you won’t have any issues running the top game titles out there. Commanding laborers to construct towns and cities without you having to deal with numerous game menus in the title Age of Empires, traversing the large maps in Overwatch and climbing cliffs and ravines in ancient locations in Tomb Raider has never been easier. Furthermore, the Cherry MXs and breathable palm-rest make everything about it that much better.

If you want to get your hands on extremely fast mechanical key switches, then the Razer Huntsman Elite is what you should be putting a lot of your focus on. Not only are the optomechanical key switches some of the fastest out there but it’s also one fine-looking keyboard. There’s really nothing this keyboard can’t do. If you want something that’s literally near perfect, here it is. The K95 XT Platinum may be a tad bit pricey but it’s worth every penny in so many ways. For starters, those of you that are going to use it to stream will absolutely love its Elgato shortcuts. In addition to this feature, the keyboard’s keycaps feel incredibly smooth under the fingers and it’s accompanied by a considerably sizeable wrist rest.

That’s not all though. You still get a sleek design-style, incredibly attractive RGB illumination and Cherry MX mechanical switches all in this same package. It’s just too hard to beat and that’s we give this one to the Corsair K95