Skip to Content
Home Headphones Comparison Jabra Elite 75T Vs Elite 65T: Which One is Good?

The Jabra Elite 75T earbuds are almost a perfect headset product. They feature customizable and great sound, USB-C for charging, long battery life and are very comfortable. Sadly, though, the left earbud can’t be used independently. Furthermore, it doesn’t have noise-cancellation features and a wireless charging case.

When it comes to the Elite 65T headphones, while they aren’t as good as their Elite 75T earbud counterparts, they’re still a pretty solid choice, especially for how much they cost. They have passive isolation, excellent sound quality, solid comfort and decent battery life. Its biggest disadvantage is that it still doesn’t charge using Micro-USB. 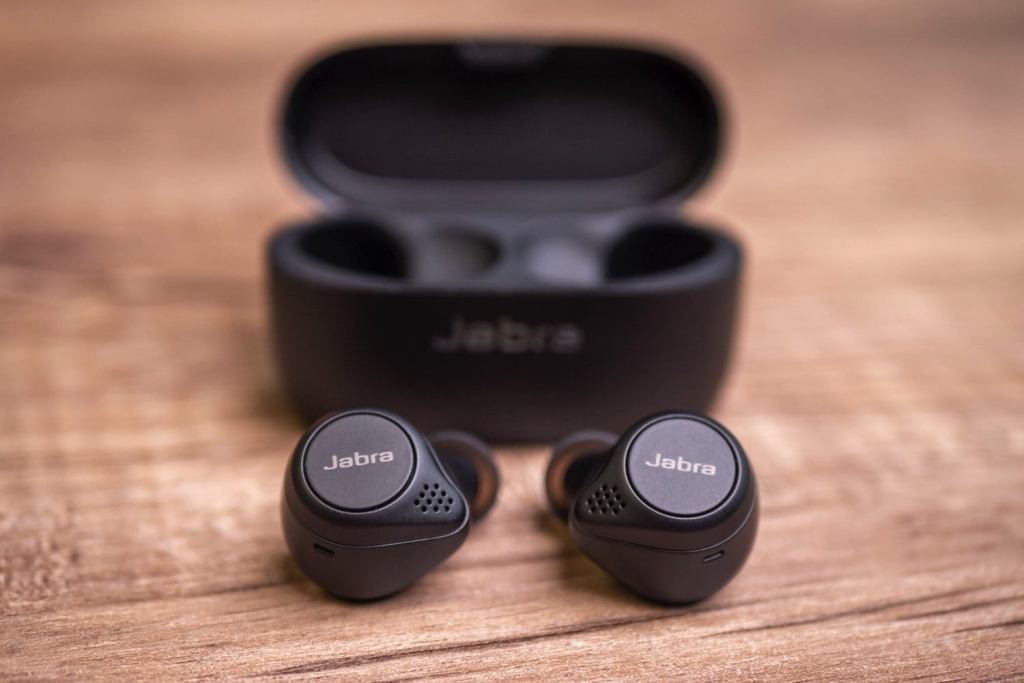 The Elite 75t is about 20% smaller than their Elite 65t counterparts. While that doesn’t look or sound like a lot on paper, it’s a very big difference when held in hand. Whereas the 65t’s earphones are simply too big for some certain ears, the diminutive Elite 75t earphones are small enough to fit almost any ear canal. Each 75t bud still has the single button feature, however, they’ve done away with 65t’s volume rocker. Instead, to decrease the volume you’ll have to long-press the right bud while to increase you’ll have to long-press the left one.

The 75t earbuds are manufactured entirely using rubber and plastic giving them that sleek but sturdy, utilitarian feel and look. They are IP55 water-resistant so they can take the seating from the gym or long walks.

Jabra Elite 65t earbuds don’t have the best-looking design, but the mature and understated look they have going for them isn’t that bad. Both the charging case and earbuds are manufactured entirely using plastic, however, Jabra has still managed to give them that premium product feel. The earbuds themselves are made using a nice soft-touch plastic material that helps ensure they feel comfy even during long periods of time.

The 65t buds have perforations that allow for different microphones to pick up the user’s voice when making calls, but also to allow for background sounds to sip in. Additionally, Jabra’s app can help you customize how much sound you’d like to let in, and this is available on both iOS and Android. This app can also help you customize many other presets for scenarios like relaxing, commuting etc. Unfortunately, though, one downside with Android is that a Jabra Service App will have to be downloaded separately if you want to use the main sound app. 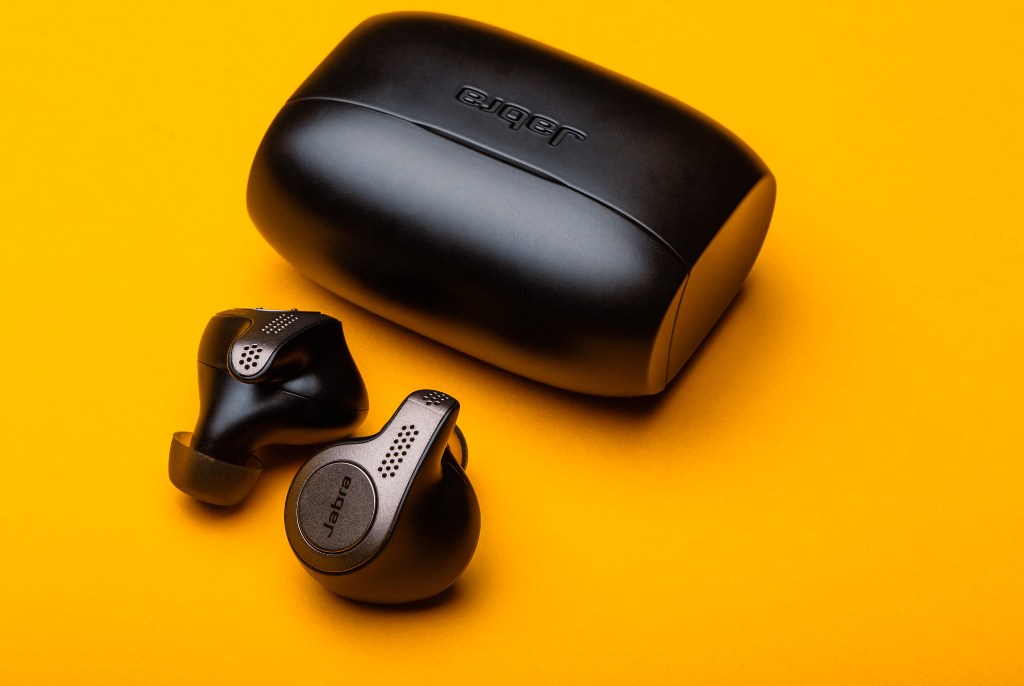 The Elite 75t earphones are hands-down some of the best sounding wireless earphones on the market. Their one glaring downside is that they have somewhat of an overbearing low end at times. Also, you’ll need to be a little cautious when on maximum volume because blasting audio at that level will create excessive reverberation that is unsettling to the ear.

The Elite 75t earbuds have passive noise-cancellation which, although, might not perform as well as ANC isn’t such a bad consolation prize. It helps keep out a little background noise.

The Jabra App has EQ presets that allow you to customize the 65t’s sound capabilities. But that doesn’t mean they don’t provide above-average sound quality on their own. The sound performance of the 65t earbuds are on par, or even better than, most of the other wireless Bluetooth earphones out there. There’s no sacrifice or penalty you’ll have to endure, as far as sound quality is concerned, when dealing with most Jabra Elite earbuds, and both the 75t and 65t are no exception to this. 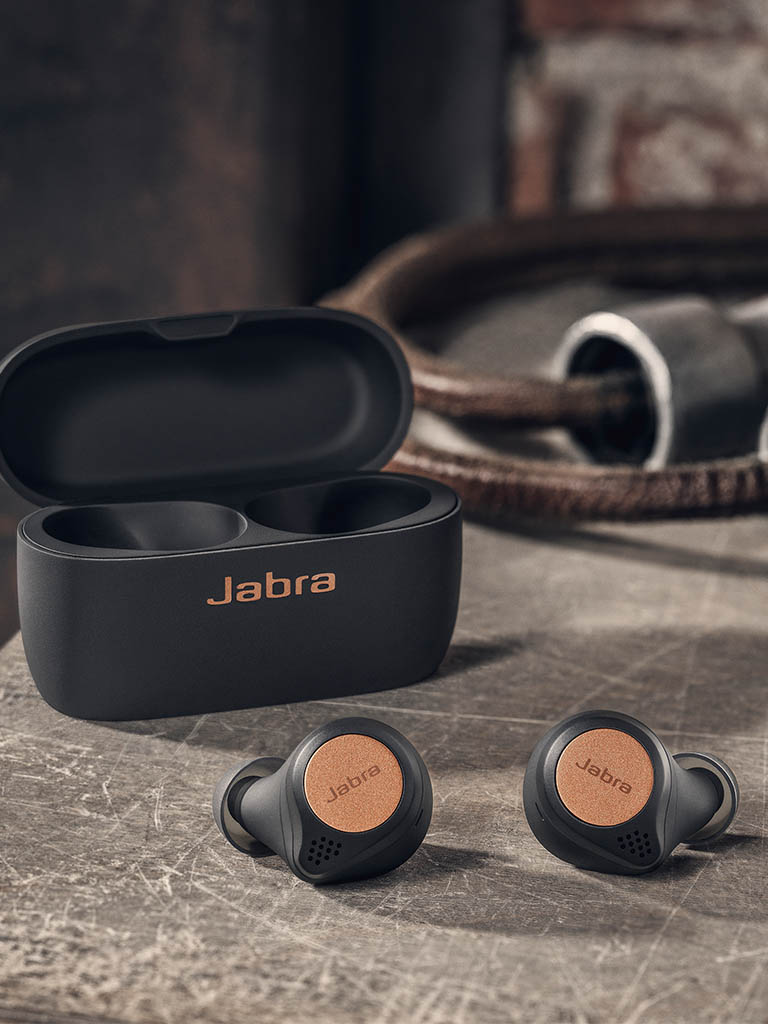 The Elite 75t weighs around 0.19 ounces, which makes them one of the lightest wireless earbuds you can find. In fact, the number might even seem a lot more trivial when put up against the 0.22 ounces that the 65t measures in at. They and the Airpods Pro weigh about the same. It has a longer sound port which allows them to slide comfortably into the ear. They also have gel tips that help create a decent seal and fit around the ear canal.

The 65t earbuds are, without doubt, among the most comfortable truly wireless earbuds currently on the market. Everything about how these earbuds are manufactured and shaped just works. The in-ear tip, the pod and the small arm (which helps the user anchor and insert the bud). Also, it comes with 3 silicone gels in different sizes to cater for whatever fit that’s required. Once the right fit is attained, the buds won’t move even an inch and are completely stable. 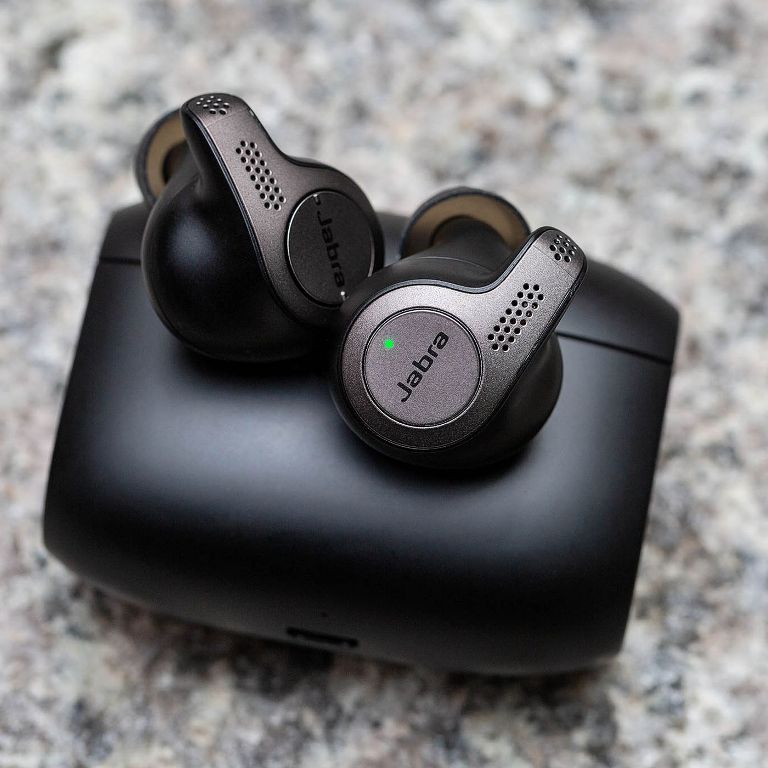 One of the things that many people usually like about Jabra earbuds is their call quality. However, the 75t falls a little short of that, especially when the 65t series provided such crisp, loud-sounding calls. The 75t earbuds sound really low, even when you put both the smartphone and earbuds at max volume. As far as connectivity is concerned, the 75t’s is a little spotty, however, updating them will give you that much-needed boost. Oh, and Bluetooth on the 75t is much more stable and has a longer range.

The 65t earbuds are very reliable when it comes to connectivity. Where other wireless earphones experience audio disconnects, dropouts and stutters on busy streets, Jabra earbuds and specifically the 65ts do not have such annoyances. They perform flawlessly in places where other truly wireless Bluetooth earbuds might suffer. The one place they might experience some difficulty is in underground environments such as mines, subways and the like.

But, recent firmware updates can help stabilize the connectivity when in these situations and environments. 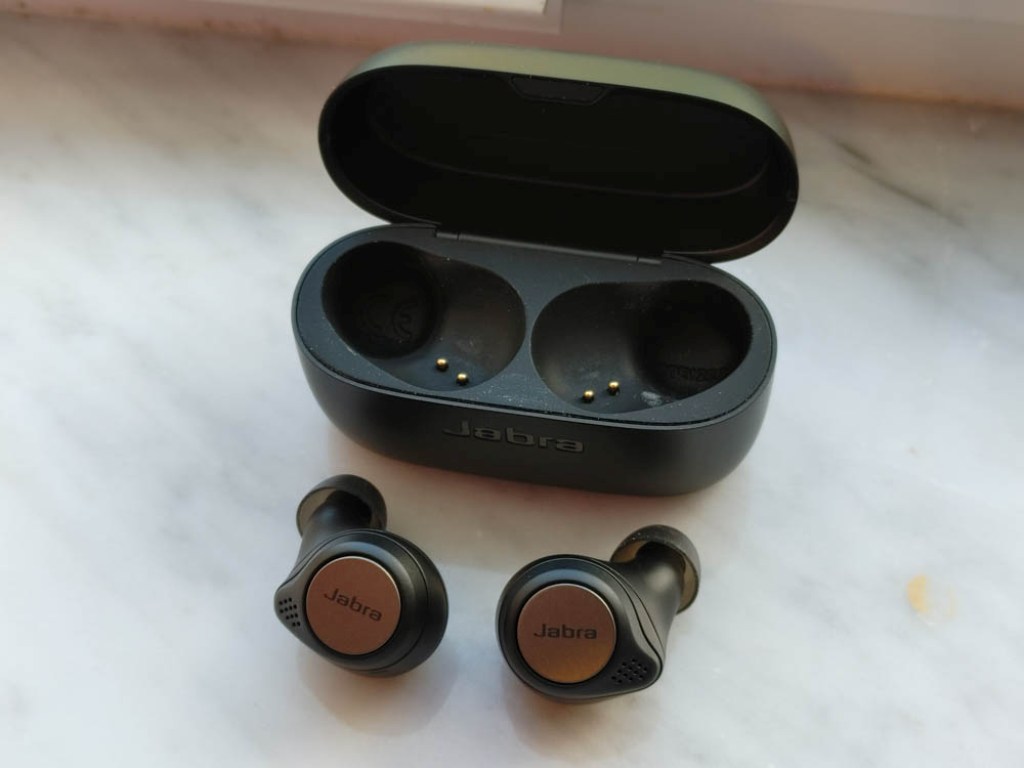 Most Jabra earbuds will give you around 6-7 hours of battery life, but not all of them. The 75ts will give you around 7.5 hours of listening time, which is around 2 hours more than what the 65t earbuds have to offer. However, what makes the 75t buds standout is their revamped charging case. Whereas you only get around 15 hours from the 65t’s charging case, the 75t’s case will give you about 20 hours, which is a big bump. The 75t is also USB-C compatible (and comes with one) and has fast charging capabilities whereby a 15-minute charge can provide you with around an hour of listening time.

The Jabra Elite 65t earbuds will last you around 5 hours on a full charge which isn’t too shabby to say the least. If you charge them in between workouts then they should last you for an additional 9 hours or so. This can result in having to charge them only once a week if not used that often. If you’re going to use them while on short runs or during your commute to and from work, then you might not have to worry about dead earphones ever again. 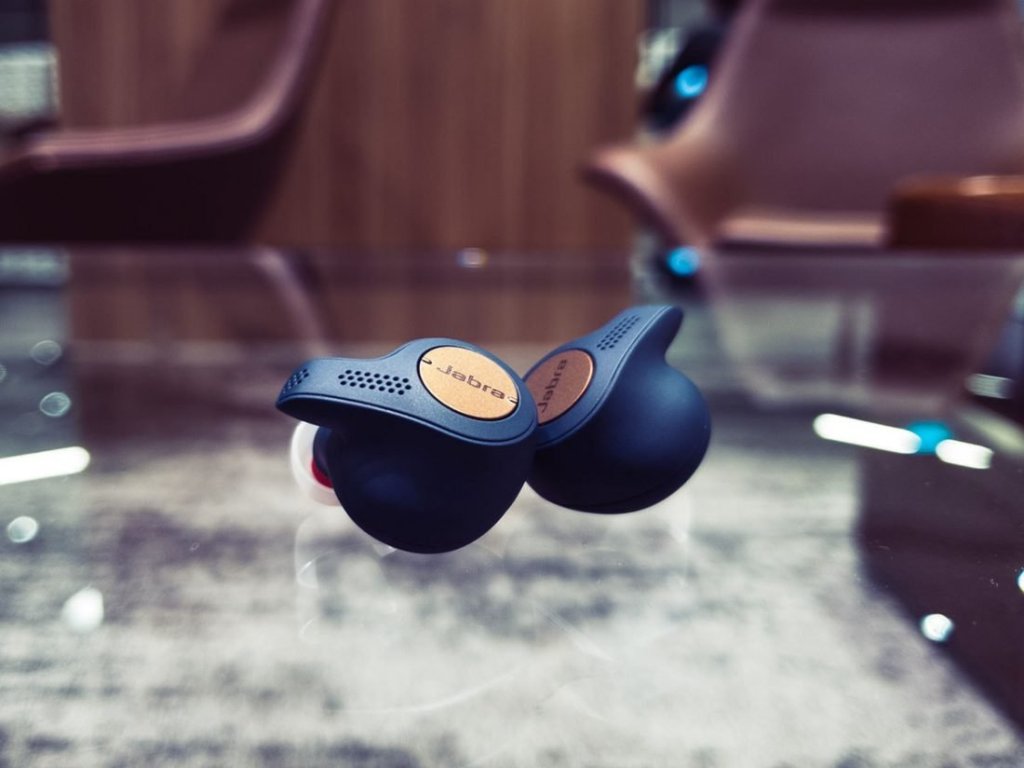 One of the most noticeable differences between the 75t and the 65t is earbud stability. The 75t earbuds are much more stable. The 65t, on the other hand, fall out of the ear way too often, especially in those people that have large ear canals. The introduction of a USB-C with the 75t earbuds also gives them another edge over their 65t counterparts. The USB-C makes charging your earbuds slightly less annoying. The 75t’s battery also lasts longer than the 65t’s, with a staggering 2-hour difference.

Yes, the Elite 65t earbuds aren’t lousy wireless earbuds by any means, however, they’re really no match for their 75t counterparts. In fact, they really don’t stand a chance when compared pound-for-pound. If you wanted to know which earbuds are better between the two, then the Jabra Elite 75t earbuds have it.